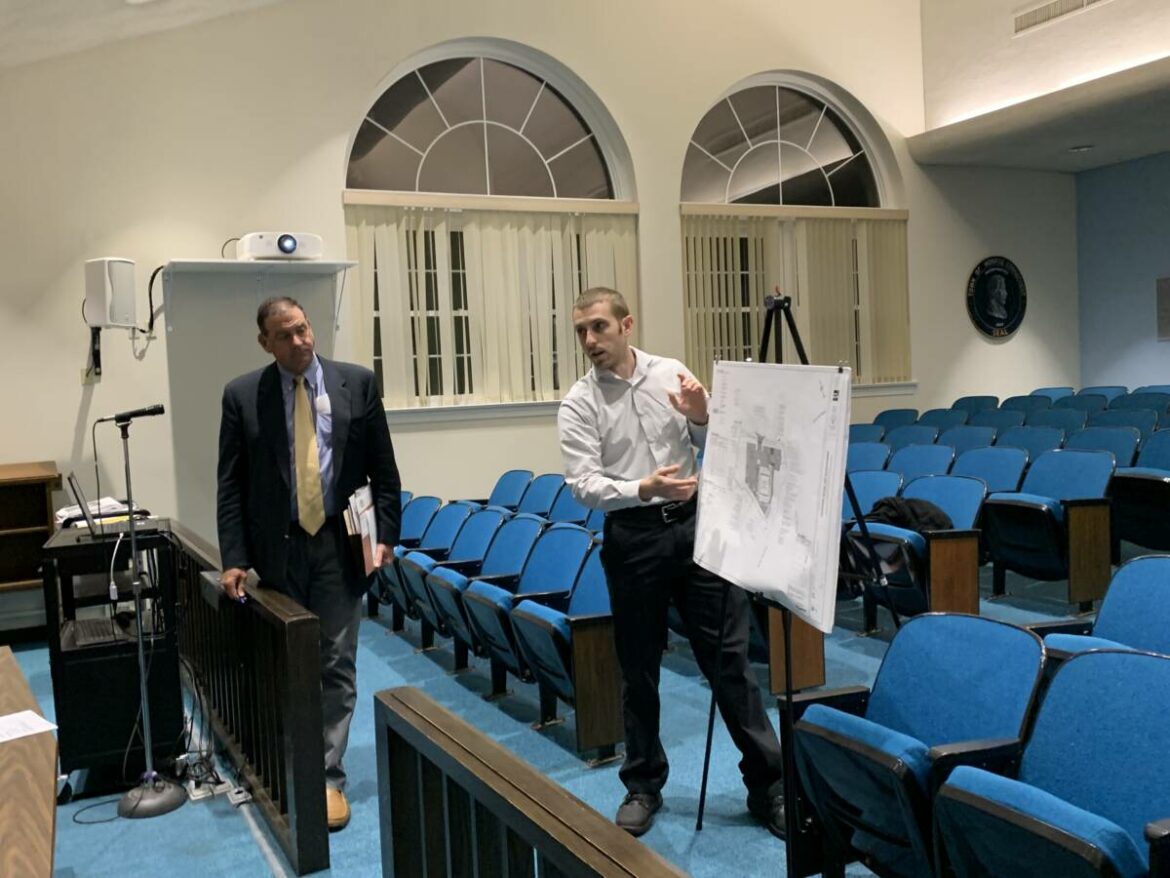 Attorney Raymond Rizio, left, and Tim Houle, an engineer, present plans for a commercial building at 143 Purdy Hill Road with a Chipotle, a Jersey Mike's and a third tenant during a Planning and Zoning Commission hearing at Monroe Town Hall Thursday night.

MONROE, CT — Plans for a commercial building at 143 Purdy Hill Road with a Chipotle, a Jersey Mike’s and a tenant to be named later received unanimous approval from the Planning and Zoning Commission Thursday night.

“With your help, I think we created a better building and a better site,” Raymond Rizio, an attorney for the applicant, told the commission at the close of the hearing.

Rizio said his client Garrett Homes’ goal is to open the Chipotle by June 1.

The 5,320-square-foot building will have a pick-up window at Chipotle for online orders only, with no menu boards for drive-thru orders. There will also be patio seating for Chipotle and Jersey Mike’s.

The pick-up window will have a queuing lane and an outer lane, allowing drivers to get out of line if they realize they forgot their money or did not know it was pick-up only.

Mike Barago, a project manager with BKA Architects, went over proposed changes to the building design, which will have more awnings. Among the conditions of approval, is to extend the brick veneer to the back of the building.

The site will have 58 parking spaces. Town Engineer Scott Schatzlein asked for islands, but Rizio said islands take a beating from trucks. An open parking lot was proposed.

Tim Houle, an engineer with BL Companies, an Easthampton, Mass., firm, said utilities and domestic water will come in from Purdy Hill Road. The site will have a propane tank and an enclosed Dumpster.

Commissioner Leon Ambrosey asked if people will be able to see the propane tank and Rizio said it will either be underground or screened.

A subsurface storage tank on the site will handle storm drainage and slowly release the water back into the system.

There will be a solid wooden fence in back of the property. Rizio said it will be six feet high and by “solid” he means there will be no slats someone could see through.

“Is it a decent looking fence? Is it stained?” Ambrosey asked.

“We can stain it,” Houle replied.

Rizio said the fence will also serve as a buffer between a residential property on Purdy Hill Road.

At the end of the hearing, Greg Citrano, owner of the neighboring property, turned to Rizio and said, “hey, thanks for accommodating me. I really appreciate that.”

The developer, Garrett Homes, agreed to build a sidewalk along Purdy Hill Road and Monroe Turnpike. As a condition of the commission’s approval, if the Town Council agrees to discontinue a portion of Spring Hill Road and connect it to the property, a sidewalk must be extended there.

Garrett Homes also agreed to convey a portion of its property to the town of Monroe for its future plan to add a third lane to Purdy Hill Road.

The landscaping plan has arborvitaes and shrubs. Four trees will be planted across the front of the property and one on the side. 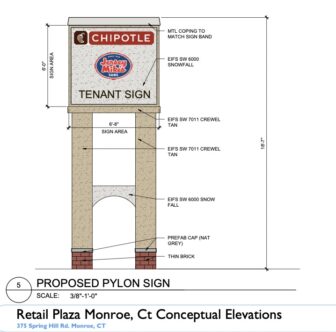 A standalone sign will be lowered from 20 to 15 feet high.

“It looks great,” Secretary Ryan Condon said of the project during deliberations.

“I love the project,” Vice Chairman Bruno Maini said. “I think it’s beautiful, great screening for the neighbor. I’m glad you listened to his concerns.”

Maini asked if the building could hook into a gas line instead of having a propane tank. Rizio said they would prefer that but could not find a gas line nearby. Maini asked Citrano what his home uses and Citrano said propane.