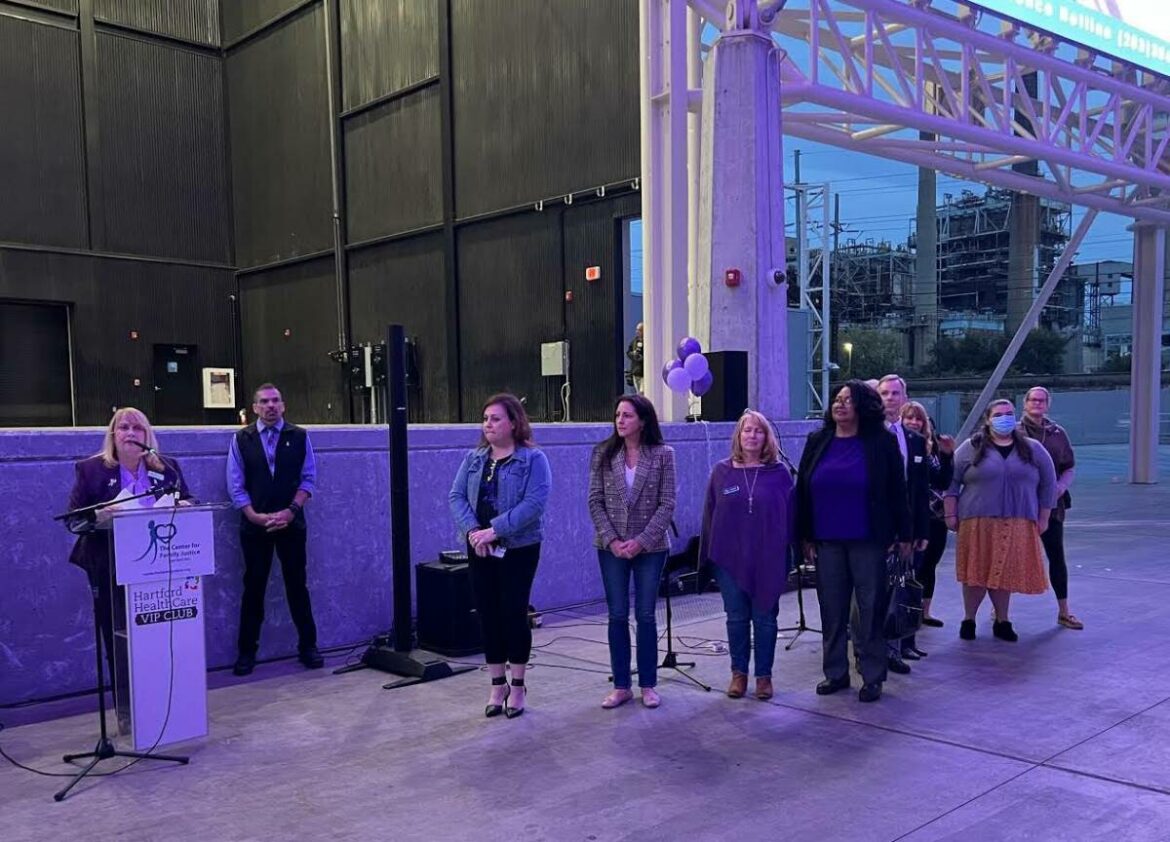 Deborah Greenwood, president and CEO of The Center for Family Justice, speaks during the nonprofit's annual candlelight vigil at the Hartford Healthcare Amphitheater in Bridgeport Wednesday night.

BRIDGEPORT, CT — The overhead lights of the Hartford Healthcare Amphitheater were purple, rather than the usual blue, in recognition of Domestic Violence Awareness Month Wednesday evening, when more than 500 people gathered for The Center for Family Justice’s annual candlelight vigil.

A video flashed the names of the 32 Connecticut residents who lost their lives to domestic violence from an intimate partner in the past year, and a moment of silence followed as those in attendance held purple glow sticks and used the flashlights of their cellphones for the vigil. 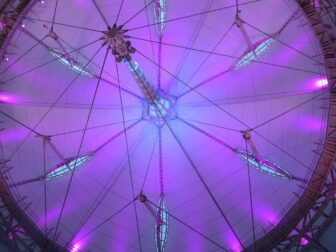 The overhead lights of the Hartford Healthcare Amphitheater are purple in recognition of Domestic Violence Awareness Month.

“Tonight is the night of hope and inspiration,” Deborah Greenwood, president and CEO of The Center for Family Justice (CFJ), said from behind the podium.

The amphitheater was adorned in purple balloons and tables displayed memorials to the victims and pamphlets with resources.

The audience had a strong police presence, including recruits from the Bridgeport Police Academy, elected officials and young people. Greenwood said it is important for teenagers to learn what healthy relationships are.

Matthew Reale, chairman of CFJ’s board of directors, said he participated in his first vigil in Trumbull 14 years ago, and had the solemn responsibility of ringing a bell when the name of each person killed by domestic violence was called out.

Throughout Wednesday evening, a Metro-North train could be heard rumbling by at different intervals. “I want us to think about why we’re here every time a train goes by,” Reale said.

The Bridgeport Police Department’s Honor Guard led everyone in the Pledge of Allegiance, which was followed by a moment of silence for those who lost their lives to domestic violence in the past year.

Greenwood said the problem of domestic violence has worsened, with a 32 percent spike in CFJ’s case load in the last year. Greenwood shared a breakdown of the 5,570 clients the center served across its six cover towns.

There were 32 victims from Easton, 111 from Monroe, 210 from Trumbull, 242 from Fairfield, 723 from Stratford and 3,543 from Bridgeport. Greenwood also said the number of children CFJ helps doubled over the period.

She praised her staff, including the counselors, safe house employees, college campus advocates and clinicians, as well as the court advocates, volunteers, past and present board members, and those who head CFJ’s advocacy and wellness programs. 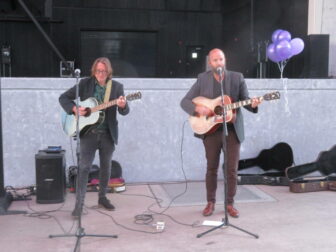 “I could not be prouder of these individuals,” Greenwood said. “They never give up hope. I love all of you. There’s so much you do to save lives.”

Bridgeport Mayor Joseph Ganim spoke of the importance of maintaining the partnerships CFJ has with police departments, the court system and municipal leaders.

Greenwood also praised the elected state and federal officials who pass laws to help victims of domestic and sexual violence.

Hwang spoke of the power of saying no to domestic violence and praised the survivors who work to make positive change to save lives as the real heroes. 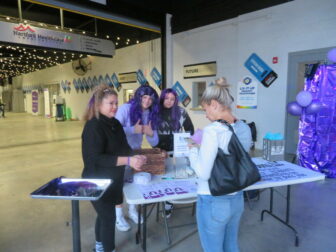 Doris Ritenour, left, who owns the salon, Hair by Doris, in Monroe, volunteers at a raffle table.

Entertainment for the vigil included the band Alternate Routes and performances by The Monroe Dance Workshop, the D’Valda & Sirico Dance and Music Centre, and the Klein Theatre Arts Program Choir.

Trumbull First Selectwoman Vicki Tesoro praised CFJ for providing hope and healing for victims. “This type of violence knows no borders,” she said. “It impacts all communities.”

Testoro said awareness, prevention and education is crucial to breaking the cycle of violence.

Greenwood said CFJ is “proud to go shoulder-to-shoulder on every case” with the six police departments from its cover towns. She told the audience how domestic violence calls are the most dangerous ones for law enforcement, with emotions running high.

Gary MacNamara, chairman of CFJ’s White Ribbon Campaign, is a former police chief of the town of Fairfield. He recalled the stress of police officers’ jobs and the challenge of officers and detectives to ensure victims are safe and get the help they need.

Garcia said the front of the Bridgeport Police Department is lit up in purple lights in honor of domestic violence victims who lost their lives.

She encouraged everyone to be relentless in the mission against domestic violence, for survivors to share their stories, and to send the message that love isn’t supposed to hurt and is not about control.

Greenwood said one-in-every-four women and one-in-every-seven men will be affected by domestic violence in their lifetimes. While most offenders are men, most men are not offenders, according to MacNamara.

The White Ribbon Campaign recognizes the need to work with young men to break the cycle of domestic violence.

This includes its annual White Ribbon Campaign and the SHU Walk to End Violence Against Women and Girls.

The event also included the unveiling of the Altar for Latinx Survivors, a call to action among youth leaders, Pathways to HOPE Youth and the #OneThing Pledge.

While most of the evening was about what has been done to end the cycle of domestic violence, MacNamara said, “what really matters is what you do tomorrow.”

One thought on “CFJ’s candlelight vigil is a light of hope, inspiration to end abuse”