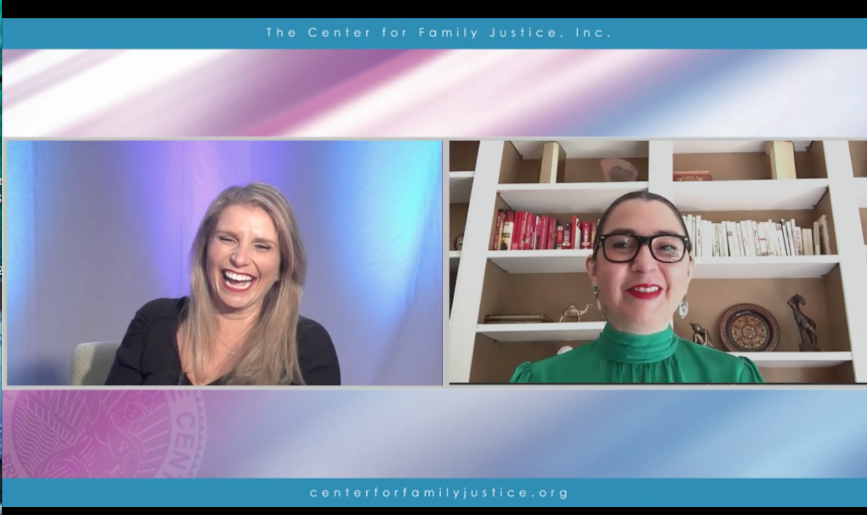 Rachel Lloyd grew up in a broken home with alcoholism and domestic abuse and eventually found herself ensnared in the sex industry as a teenager. But she managed to  escape that life and work for an organization helping women to emerge from the commercial sex industry.

Lloyd spent nights on the streets doing outreach and days visiting Rikers prison and homeless shelters. In 1998, she founded Girls Education and Mentoring Services (GEMS) to bring awareness to sex trafficking and help victims get the love, support and practical resources they need to live better lives.

“Every community around the country thinks the same thing: it couldn’t happen here,” Lloyd said of sex trafficking. “It not only can, it is happening.”

Lloyd was the keynote speaker at The Center for Family Justice’s virtual fundraiser, Speaking of Women, Tuesday. She was interviewed by Anna Zap, star of the “Anna & Raven” show on Star 99.9 radio.

“We provide hope, safety and empowerment to victims and survivors in the communities we serve,” said Debra A. Greenwood, CFJ’s president and CEO.

Zap said this year’s Speaking of Women fundraiser comes at a critical time, when domestic violence cases rose by 56 percent since the coronavirus pandemic kept people at home.

On Tuesday, CFJ benefited from an anonymous donor, who offered to match every penny donated, up to $50,000. Greenwood thanked all of the sponsors, including the title sponsor, People’s United Bank.

Marge Hiller, a longtime volunteer and a Distinguished Service nominee, spoke, as well as Kathy Maiolo, chairperson of The Center for Family Justice’s board of directors. Maiolo, of Monroe, publicly shared her story of abuse for the first time.

Maiolo’s stepfather sexually abused her from age 10 to 16. He also abused her mother and sister. When she was old enough to move out, Maiolo freed herself from the turmoil, but a sibling who witnessed her abuse reported it to the police.

After the prosecutor convinced her to testify, Maiolo bravely faced her abuser in court and was shunned by some members of her family. Before proving her stepfather’s guilt, Maiolo said she had to prove her own innocence.

“I was eviscerated by the defense attorney. I was petite, blonde and attractive, so I must  have been to blame,” she recalled. “My stepfather was sentenced to 13 years in prison, but in many ways I still feel the abuse. For many victims, there is a huge price to pay for speaking out.”

Maiolo said it took a long time for her to rebuild her life, but she learned there is still a lot of good in the world, including her husband who always stands by her side.

She said CFJ offers a lifeline for abuse victims with sexual assault and domestic abuse hotlines, safe houses, legal assistance, support groups and programs. For younger victims, Camp Hope brings children together for fun activities with people who went through the same things they did.

“I am much more than a victim of abuse,” Maiolo said. “I am a survivor and I want to offer a hand to anyone who needs it.”

Gary MacNamara, former chief of the Fairfield Police Department, talked about CFJ’s efforts to educate and rally men and boys against abuse.

“Men are part of the solution, because most of the men we know are not offenders, but most of the offenders are men,” MacNamara said.

CFJ works closely with Fairfield County police chiefs, including John Salvatore of Monroe, on initiatives like the White Ribbon Campaign.

MacNamara went out of his way to praise the efforts of Tim Shaw, of Monroe, who recently resigned as Easton’s police chief to head the Stamford Police Department. During his time in Easton, Shaw was recognized by the Connecticut Coalition against Domestic Violence as one of the “First 100 Plus Leaders” for his work to assist domestic violence victims.

Law enforcement plays a critical role in Lloyd’s mission with GEMS. Lloyd said women and girls lured into the sex industry historically have been viewed as criminals rather than victims, which also makes them less likely to seek out police officers for help.

When sex workers are murdered, it is often seen as the hazards of the trade. Meanwhile, society often glorifies pimps, while johns have gotten “a slap on the wrist.”

Lloyd said women and girls in the sex trade are often minorities, who are not viewed as real victims. “It’s a lie that it’s equal for everyone,” she said. “We need more resources.”

Aside from victims needing food, shelter, education and love and caring from people they can trust, Lloyd said perceptions must change.

Oftentimes, growing up as a victim of domestic and sexual abuse, or drug and alcohol addiction, can groom a child to be exploited later in life, according to Lloyd.

“Ideally, prevention is the better approach,” she said. “Anyone can be a victim of sexual trafficking and be commercially exploited.”

To make a donation to the Center for Women and Families, click here. For information, or to support GEMS, click here.