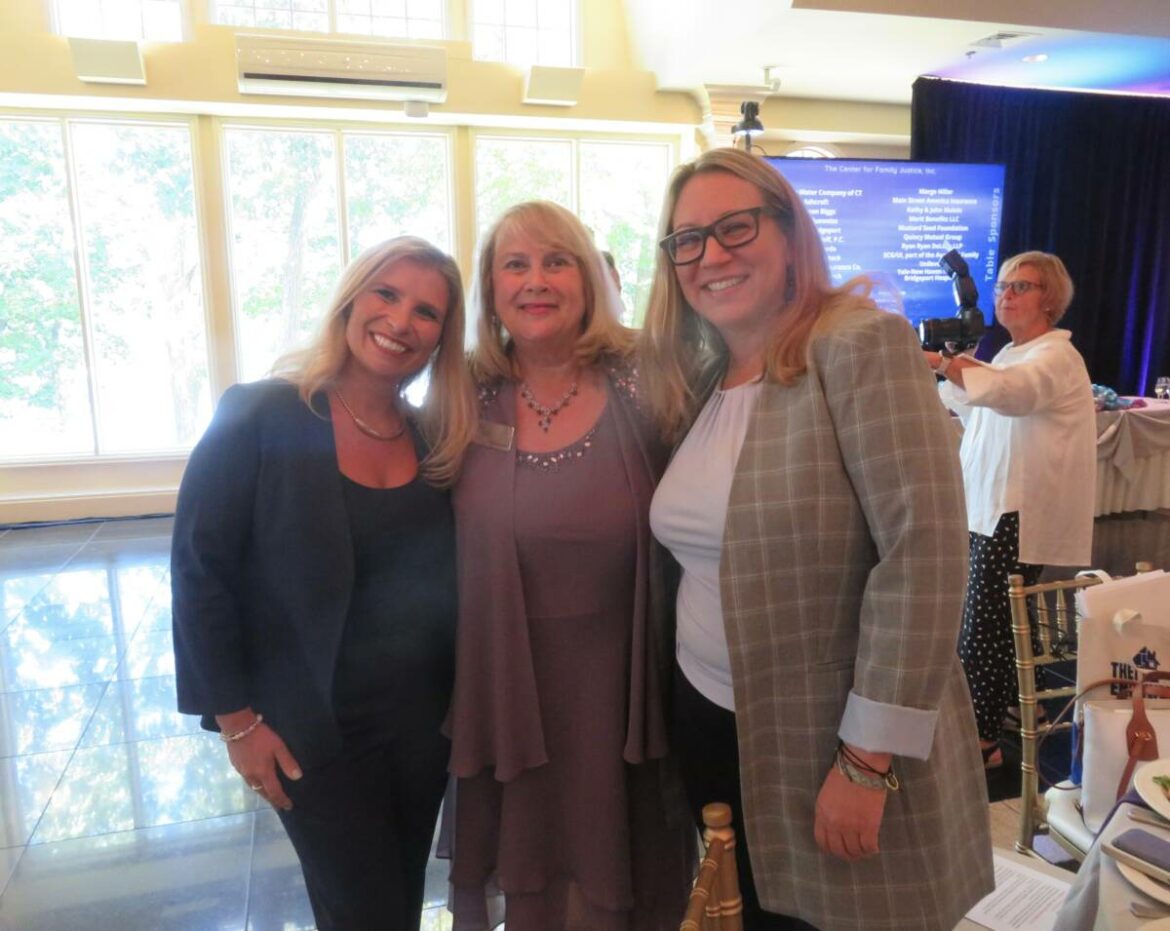 Anna Zap, co-host of the "Anna & Raven Show" on Star 99.9, left, participates in the Speaking of Women luncheon at The Waterview in Monroe with, from left, The Center for Family Justice President and CEO Debra Greenwood, and Rachel Luise Snyder, author of the book, "No Visible Bruises: What We Don't Know about Domestic Violence Can Kill Us".

MONROE, CT — When a Montana woman’s abusive husband was let out on bail, she recanted her testimony to the prosecutor detailing beatings in front of their two children, and how he bought a rattlesnake he threatened to release on her, while she showered or slept in their bed if she ever disobeyed him again.

Rachel Luise Snyder, author of the book, “No Visible Bruises: What We Don’t Know about Domestic Violence Can Kill Us“, explained that the recanting of the story was the victim’s way of showing fealty to her husband in hopes he would not harm her or their children.

However, within two years, the man shot his wife to death, before killing their daughter and son, then turning the gun on himself. 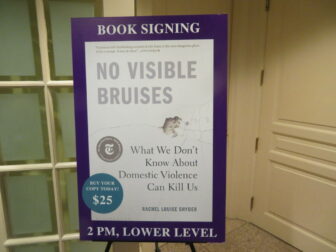 Snyder, the keynote speaker at The Center for Family Justice’s 25th annual Speaking of Women luncheon, held at The Waterview in Monroe Wednesday, noted how a restraining order and an arrest failed to protect the domestic abuse victim.

“All of these systems have one chance,” she said.

When Rocky, the abuser, was arrested, Snyder said more could have been done.

Rather than only charging him with criminal mischief for breaking down his mother-in-law’s door, knocking his pregnant sister-in-law out of the way and snatching his daughter, Snyder said police could have also charged him with burglary and vandalism.

He also could have been charged with criminal endangerment for the snake. And the D.A. could have interviewed the sister and mother and looked for the snake, so everything did not fall upon one victim’s recanted testimony.

Snyder said there is now a minimum three-hour-hold for someone charged with domestic violence, giving the victim some time to find a safe place to go, change locks or add security cameras.

The night of the murders, a neighbor saw Rocky peer into his house. The state now allows victims to pass out copies of laminated restraining orders. If the neighbor had one, Snyder said he may have called the police.

“I really believe the single most important thing you can do about domestic violence is to join all of these systems together,” Snyder said.

“I’m a journalist, part of the media system that’s not telling the story about domestic violence properly — putting the pieces together to tell the whole story,” Snyder said.

A network of assistance 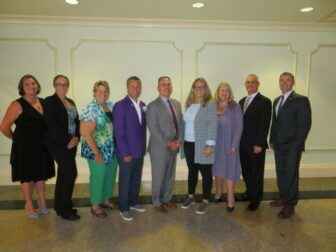 Monroe had a strong presence at Wednesday’s Speaking of Women luncheon at The Waterview.

The Center for Family Justice provides programs and assistance for victims and survivors of domestic, child and sexual abuse in Bridgeport, Easton, Fairfield, Monroe, Stratford and Trumbull.

Debra A. Greenwood, president and CEO of CFJ, led a toast to the 25th anniversary of Speaking of Women, but said, “I wish we could be out of business.”

Instead, demand for CFJ’s services rose by 32 percent in the past year, when its staff and volunteers served over 12,000 clients. “It’s hurting a lot of our families in the six towns,” Greenwood said.

But she expressed her gratitude for the assistance of community leaders, including selectmen, mayors and police chiefs, as well as safe house staff, court staff, advocates and educators teaching children prevention.

Greenwood said she saw hope in The Waterview dining room, which had 475 people attending the luncheon.

Anna Zap, co-host of the nationally syndicated “Anna & Raven Show” on Star 99.9 Today’s Best Mix, served as master of ceremonies, a role she has held for years.

“Words cannot adequately convey the ways that the outstanding staff, board members, and volunteers from The Center for Family Justice touch lives here in Monroe and throughout all the communities in our region here today,” Kellogg said. “Together, you provide our residents with access to critically important resources. We know the importance of the work you do, and we thank you for the profound impact you have made in the lives of our many communities.”

Greenwood herself is a Monroe resident, as well as Marissa Donnelly, director of Impact & Strategy for CFJ.

During Speaking of Women, M&T Bank was thanked for partnering with CFJ to make the event happen, and The Elizabeth M. Pfriem Foundation was this years’ Distinguished Honoree for its support, allowing over 50 kids to experience a week at Camp HOPE America – Bridgeport.

The camp is for children impacted as primary and secondary victims of sexual and domestic abuse. “Through a year-long mentoring program, these youth have hope for a brighter future”, according to Greenwood and Matthew C. Reale, chairman of CFJ’s board of directors.

A video was shown highlighting Camp HOPE and there was a presentation of “Written Out Loud” books written by the campers.

Stephanie Land, an author and journalist who wrote the New York Times best seller, “Maid: Hard Work, Low Pay, and a Mother’s Will to Survive,” which the Netflix series, “Maid” is based upon, was initially slated to be the keynote speaker.

Though she could not make it due to a leg injury, Land gave a video message in support of the event.

For information on The Center for Family Justice’s resources, click here. To make a donation, click here.