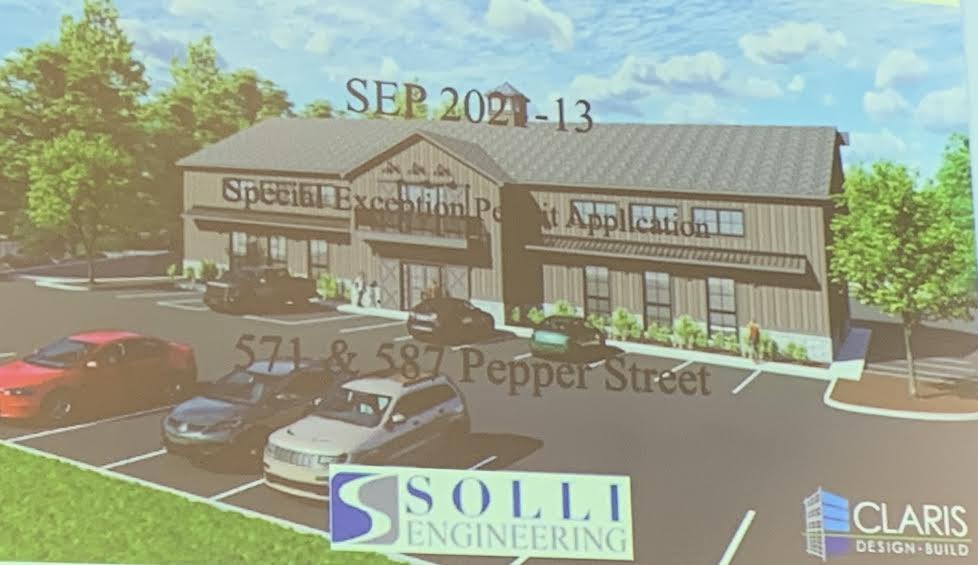 This is a computer rendering of the new office building and warehouse that will be built for Carrubba Inc. at 571 and 587 Pepper St.

MONROE, CT — Carrubba Inc., which specializes in the creation of custom fragrances, flavors, botanical extracts and natural deodorants, has outgrown its headquarters at 500 Pepper St., but plans to stay in Monroe.

Last week, the Planning and Zoning Commission approved a special exception permit to construct a 9,636 square foot office building with an attached 22,000 square foot warehouse at 571 and 587 Pepper St.

Mary Blackburn, the senior landscape architect with Solli Engineering, told the commission her client, Maybrook Properties LLC, wants additional storage space on the two parcels, which are in close proximity to Tollgate Plaza at 838 Main Street.

“I like the exterior of the building,” Nicole Lupo, a commission alternate, said before the unanimous vote of approval. “I’m glad they’re choosing to stay here.”

The property is 4.78 acres and is located in an industrial zone. It will be served by public water and have an onsite septic system.

Town Planner Rick Schultz said the proposal is consistent with the town Plan of Conservation and Development, the height of the building is consistent with regulations and the exterior lighting would be Dark Sky complaint. The site will also have off street parking.

The Inland Wetlands Commission approved the plan and the architectural plan received a favorable recommendation from the Architectural Review Board.

Frontage and access will be from Pepper Street. A single family house will be demolished to make way for the project on undeveloped land.

Blackburn said the warehouse will have five roll up doors and one loading dock on the side, which would be used infrequently. There will be single access to the property from a signalized driveway.

Ambrosey asked about traffic flow and Blackburn said the driveway will be right turn only, landscape islands were added to the parking lot plan for pervious cover, and an effort was made to provide better sight lines.

The site will have an underground detention system with catch basins and a hydraulic separator. Landscape screening in the back and front will consist of native species, according to Blackburn.

“It is 100 percent native plants, so thank you Mary and Solli Engineering,” said Barbara Thomas, secretary of the Conservation Commission in town. “There are 261 plants in this schedule with 23 different varieties of plants. It is possible,” she added of having all native species, “but you have to put the right plant in the right place.”