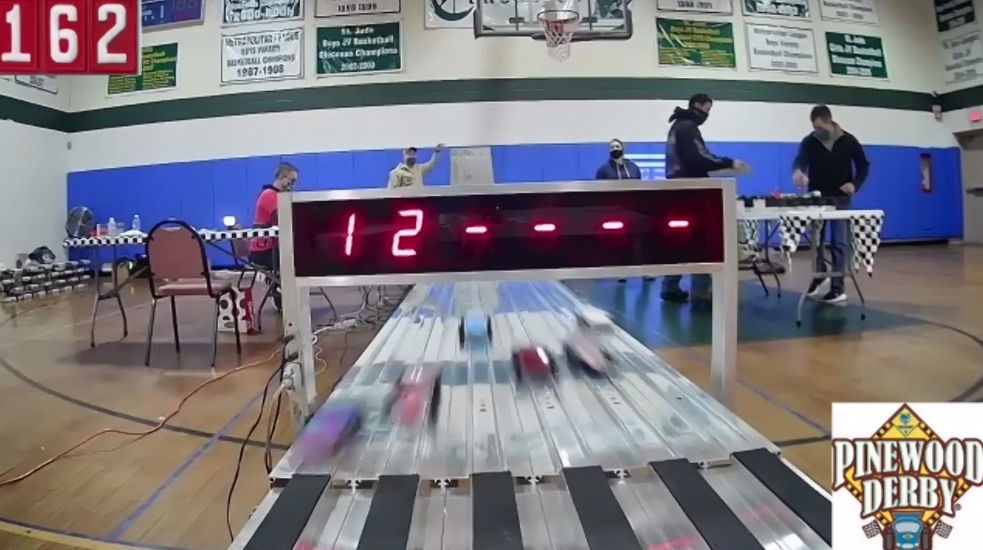 MONROE, CT — A countdown from three began with the waving of the checkered flag, before six wooden cars raced down the aluminum track inside the St. Jude gymnasium, as Cub Scout Pack 162’s first ever virtual Pinewood Derby got underway Saturday afternoon.

A variety of camera angles captured the action on the track and a computer logged the standings with participants, car names, the mph and times. Over 40 families watched from home via a Zoom call, to promote social distancing during the COVID-19 pandemic.

Cub Master John Sorel said they always hold the derby in mid-February, so the 2020 event was held live, about three weeks before the pandemic shut things down. Saturday was the first time it was held virtually.

“The feedback we got today was all pretty positive,” he said Sunday.

Sorel said the kids usually crowd around the track to watch their cars race, so the area has to be roped off. One good thing about watching it on their computer screens at home was the camera angles bringing them closer to the action, according to Sorel.

“But to me, not hearing all the cheering was weird,” he said. “It’s not the same.”

Cub Scouts from Stepney Elementary School, with some from Monroe Elementary School families, received pinewood blocks, four wheels and four nails to make their cars. The families used to meet one evening before the derby, when pack leaders would cut the wood for the kids, who would break up into groups to sand and work on their cars.

But the parents did most of the cutting this year, with some volunteers helping out.

“This year, we also gave them paper templates, so kids could sketch out the design for their cars,” Sorel said.

The Cub Scouts painted their cars and decorated them with stickers. “One looked like a frosted slice of cake,” Sorel said, adding of another car, “the Silver Submarine had a cardboard periscope. The kids are so creative.” 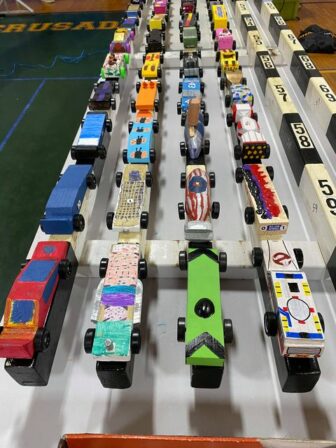 A total of 52 cars participated in the Pinewood Derby, an annual event held by Cub Scout Troop 162. Photo by Annie Scarano

A total of 52 cars raced down the track Saturday. Among the names were Slick Like Butter, Green Dragon, Into the Fire and The Puzzle Piece Car.

Sorel served as the announcer for the races inside the gym, setting up cars at the starting line with the help of Den Leader Ali Pickens. The more than 40 people watching from home participated in the countdown, “3, 2, 1!” before Sorel pulled a lever releasing the cars to race down the steep track.

A digital scoreboard over the finish line recorded the placing of each car as it whizzed by.

The racing began a little after 1 p.m. and went on for about an hour. The derby included 44 heats for the Cub Scouts’ cars and seven heats for siblings and adults.

Before the derby, Sorel said volunteers washed down the track using magic erasers, because the graphite children are allowed to use to powder their cars’ tires to make the wheels spin better leaves dust behind.

“What do you guys think? Do the cars look pretty fast today?” Sorel asked during the heats. “Do I get a thumbs up?”

“How do you like the camera angles?” he asked moments later. “Are you guys having fun watching this at home?”

“Cool cars everybody!” one person wrote.

When the races were over, Carter Stepkoski wrote: “Thank you sooooooo much everyone! This was AWESOME!!!!!”

And the winners are … 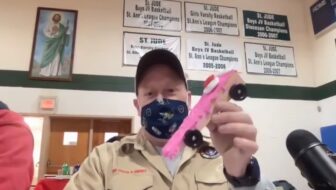 Prizes, trophies and goodie bags were awarded to the top finishers and cars recognized for creativity.

Sorel said the actual speed of the cars top out around 10 mph, but the average speeds were scaled up to what it would be if the cars were a normal automotive size. According to those calculations, The Golden Bullet’s average speed was 191.64 mph. 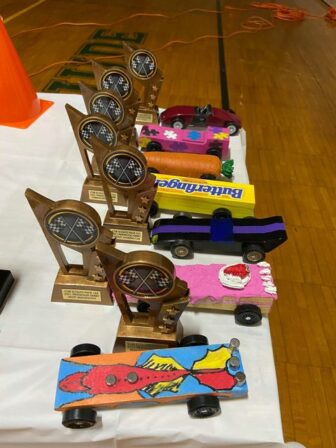 Winning cars are parked beside their trophies during the awards ceremony for the Pinewood Derby. Photo by Annie Scarano.

During the awards ceremony, Sorel showed viewers shots of the trophy table with the winning cars and held up some cars for close ups, to show off the designs.

“I thought you guys did a great job today,” he said. “I saw a lot of fun, creative cars. I saw fast cars. I want to thank the parents and St. Jude for allowing us to use the gym for this large track. I hope you guys had a good time today.”