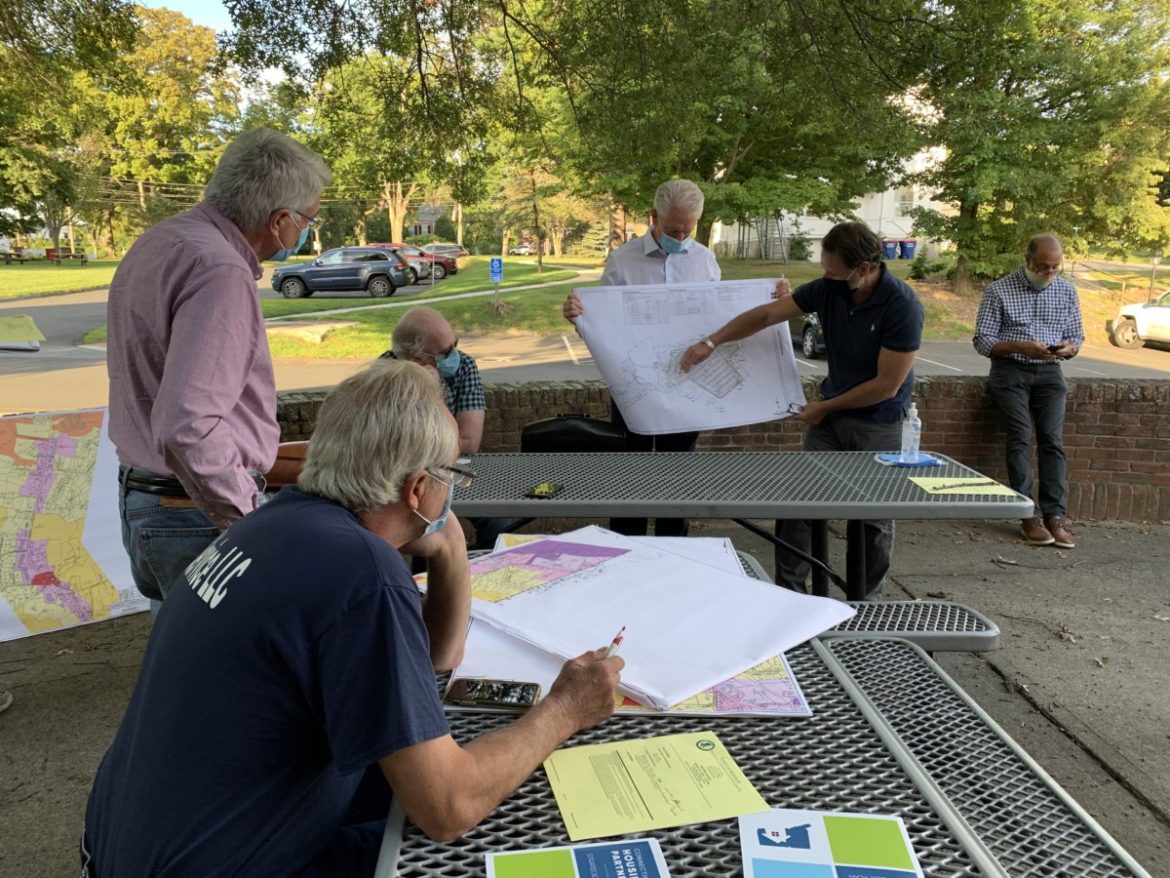 Attorney John Knuff holds up a plan for a commercial vehicle business at 10 Victoria Drive, while engineer, John Schmitz, explains it to the Planning and Zoning Commission's Regulations Subcommittee during a meeting outside Town Hall Monday.

MONROE, CT — Attorney John Knuff presented a proposal for a fleet of delivery vans to be housed at the former Walmart property at 10 Victoria Drive to the Planning and Zoning Commission’s Regulations Subcommittee Monday.

“The world has changed and retail has changed,” Knuff said during the meeting held on tables outside Town Hall. “We have a proposed tenant, who delivers packages to people’s homes and businesses, whose name will remain unknown.”

He later said it would start with 400 vans and do deliveries for the company’s new facility in Trumbull. Amazon has a new distribution center in Trumbull.

Knuff attended the meeting with Phil DiGennaro, a developer, and John Schmitz, a professional engineer from BL Companies.

The applicant is seeking a potential zone change to allow a small building with a large parking area on the property, which is over 20 acres. It is in an I-3 zone and the closest residential property is 150 away.

“Let’s face it. You don’t have many properties this size on an arterial road,” Knuff said. “People aren’t building motels and retail. This is the way the world is.”

The building would be 10,000-square-feet and be used by drivers and security. The facility would not be used for maintenance on the Mercedes-Benz Sprinter vans.

DeGennaro, who would lease the property to the tenant, said this means business at local repair shops and tire stores would “explode.”

“Any time the drivers want a cup of coffee or need gas and tires, they will use local businesses,” Knuff said. “There’s no place for them to get gas or do repairs.”

Knuff also assured William Agresta, the town’s planning and zoning administrator, and Leon Ambrosey, a commission member, that the town would receive all of the tax revenue for the vehicles.

Knuff said the vans would be not be loaded on the property, because he believes town regulations do not allow that, and the drivers would avoid early morning rush hour traffic, while working between 9 a.m. and 9 p.m. He added more details would be included in a site plan application.

“We could create a new use or make it a commercial vehicle facility and amend it to be allowed near a residential zone,” he said. “We don’t care which avenue.”

One possibility is to amend the zoning to allow the facility to be a minimum of 150 feet away from a residential property.

“This is a very preliminary plan — a quick concept design,” Knuff said. “The goal is to stay out of the upland review area for inland wetlands. We’re working with Will Agresta on landscaping.”

The preliminary plan includes 865 parking spaces, but Schmitz said they will probably lose some spaces when the landscaping is factored in.

“Kevin Solli did a great job with the stormwater system for Walmart, which was approved, so we will mimic Kevin Solli’s design,” Knuff said.

Agresta suggested having more of a face to the road, with the building and landscaping showing, rather than just the large parking lot.

“We want to make it attractive,” Knuff said of the site, adding they will talk to their neighbors, Victorinox-Swiss Army.