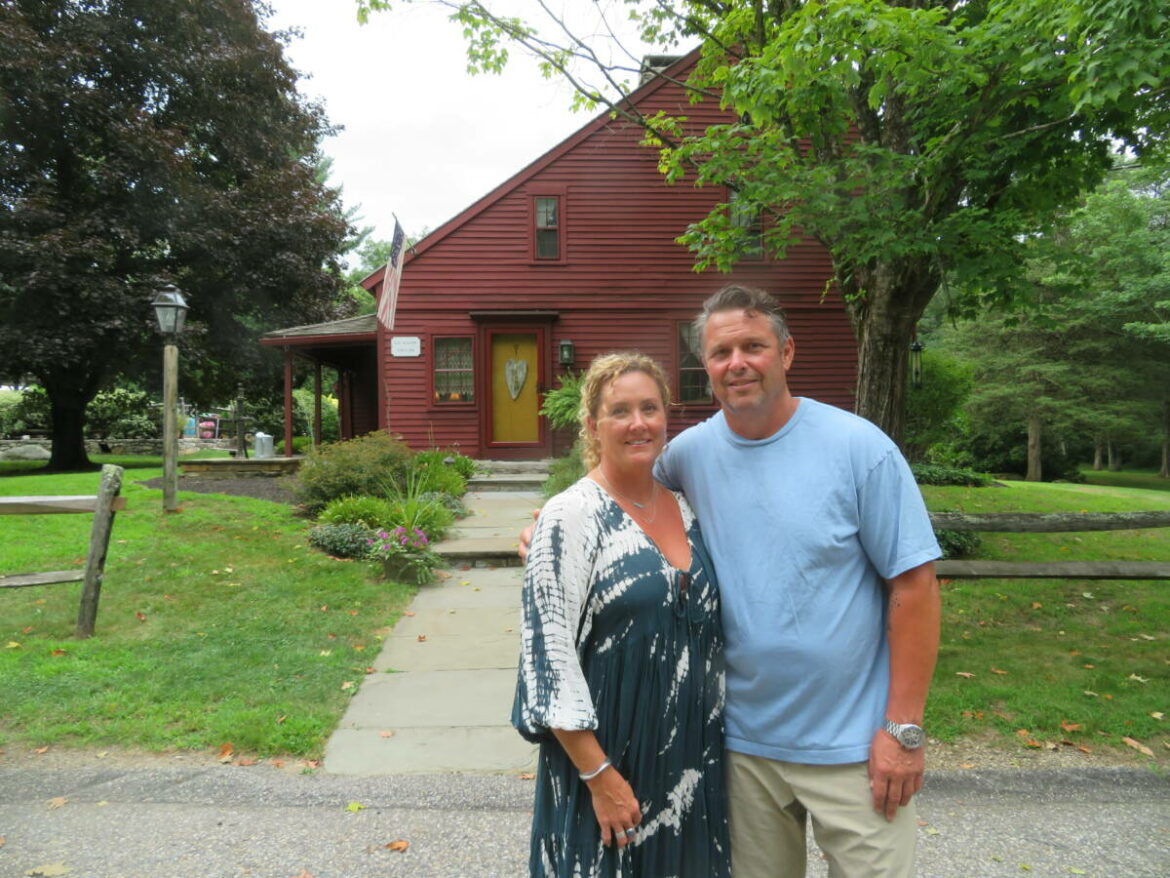 MONROE, CT — Flowers adorn the walkway to a cottage red saltbox house on Great Ring Road, where a replica of the 1776 American flag hangs by the front entrance and an original hand pump is on display nearby.

Beyond the split-rail fence along the street, a friendship garden houses perennials. The large barn, among the outbuildings on the 2.7-acre-property, has no nails — it is strictly pegged, according to a listing of the home’s unique features, and outlines marking horse stalls can still be seen on the floor. 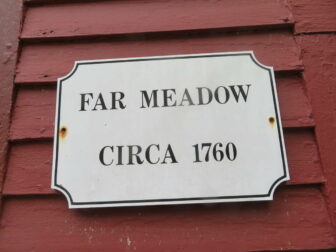 The house, built circa 1760, is called Far Meadow. It still has the original joists, and exposed hand-hewn wooden beams line the low, seven-foot-high ceilings of the first floor.

Among the four fireplaces throughout the house, the one in the keeping room is equipped with a beehive oven, where families cooked and baked over the years.

Antique wooden furniture from the 1700s adds to the original charm — Chris Weiser made sure of that.

“Chris collects 18th Century antiques. He has a slight addiction,” his wife Elaina said with smile, as the Weisers gave a visitor a tour of their house on Monday.

The couple bought the house at 6 Great Ring Road in 2003.

Chris, who grew up in Easton, fell in love with history as a boy, during family trips to Mystic Seaport and Sturbridge Village, and Elaina lived near the historic Pardee-Morris House in New Haven, where she earned a Girl Scout badge for giving a visitors a tour.

The Weisers’ first house together was built in Trumbull in 1826, but it was “too modern” to properly display the era of Chris’s antique collection.

One day in 2003, Chris was flipping through an issue of the Easton Courier when he saw a real estate ad for Far Meadow in Monroe. 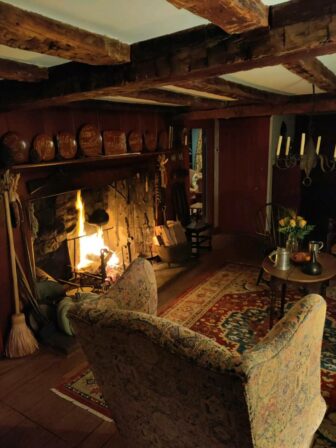 The fireplace warms the keeping room of Chris and Elaina Weiser’s home on Great Ring Road.

“I cut it out. I went online and pulled it up,” he recalled. “I never thought of Monroe, because we used to make fun of it due to the Barlow-Masuk rivalry.”

After looking at the photos online, Elaina agreed to see the house.

“I loved our house and saw no reason for moving,” she said. “Our house was modernized and livable. It had an addition with a big family room. A lot of these older houses need lots of work — and I didn’t know I was pregnant with our third child.”

But Elaina’s feelings changed during her visit to the saltbox on Great Ring Road. “I walked in and felt, ‘this is home,'” she recalled. “I never felt that before.”

The Weisers sold their house in Trumbull and bought Far Meadow within days.

Its previous owners, the late James and Gretchen Davison, loved their house, which they proudly included on maps for Monroe Historical Society Christmas House Tours. The couple wanted the house to remain “as is” and were very particular over who they would sell it to, Chris said. 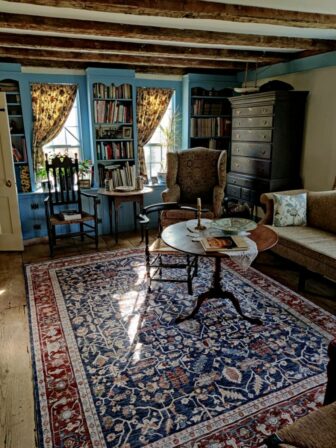 The parlor of Chris and Elaina Weiser’s house has antique furniture, including the highboy dresser in the far right corner.

The Davisons visited the Weisers years later to see their old house. Chris said they liked what they did with the kitchen and bathroom, but were not as happy to see the addition off the back.

Because of all of the antiques in her family’s home, Elaina said she wanted a place where their three children could play without worrying about breaking things. The Weisers’ children are now age 18, 20 and 22.

But the room still has its fair share of antiques, including a Fairfield clock made by Joseph Bulkey and a 1710 wooden blanket chest from Guilford, which Chris bought at a state auction in New Hampshire.

“It’s one of my favorite antiques,” Chris said of the chest, which has a heart on each side, carved right out of the furniture’s wood, rather than being made separately then attached.

A treasure trove of history 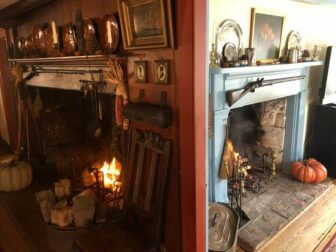 Rifles used by each side during the Revolutionary War are displayed on fireplace mantles in the keeping room, left, and the parlor, right.

Far Meadow’s original address was 202 Hammertown Road, before it was changed to 6 Great Ring Road in 1999. The house stood before the American Revolution and was lived in during every U.S. presidency. The earliest owner historians are certain of was Eli Smith in 1784.

The Weisers said they can still feel the presence of their home’s previous owners.

“Sometimes we sit around the fire and wonder what the conversations were like —if these walls could talk …” Elaina said.

“Benjamin Franklin negotiated a deal with the French for the rifles,” Chris said of the Charleville muskets used by the Continental Army. 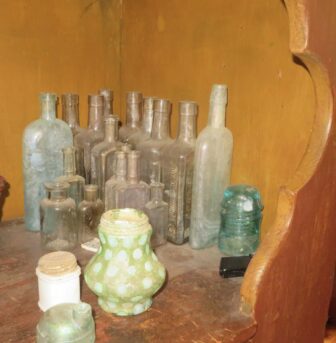 Bottles and an inkwell were found on the Weisers’ property.

Chris’s furniture includes a circa 1750 wooden chair from Massachusetts, a circa 1690-1710 New York chair, and a secretary with elaborate carvings from Connecticut.

Elaina said she is fascinated by the history of the pieces, sometimes wondering, “who sat in this chair” or “who used this rifle?” Chris said he thinks the same things while drinking out of his pewter mugs.

Some of the Weisers’ relics were found right on their property.

While grading the backyard, Chris said he found the site of an old outhouse and items that were left on the ground, including an inkwell and medicinal bottles, one with the label: “Dr. Kennedy’s Elixir.” 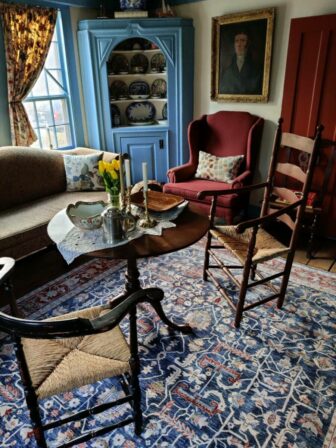 The parlor of Elaine and Chris Weiser’s home.

The biggest challenge of living in an antique house is the maintenance, according to Chris. Elaina said they use a builder from Hungary, because Europeans are used to working on older houses.

“There are no right angles. Nothing is even,” she said of their home’s construction.

“We easily could have put up an asphalt roof, but put in a cedar roof for the authenticity,” Chris said, adding it would be too expensive to do the same for the big barn. “You have to make compromises and sacrifices,” he added.

“I feel like having this home is a responsibility,” Elaina said. “We’re really preserving a piece of history.”