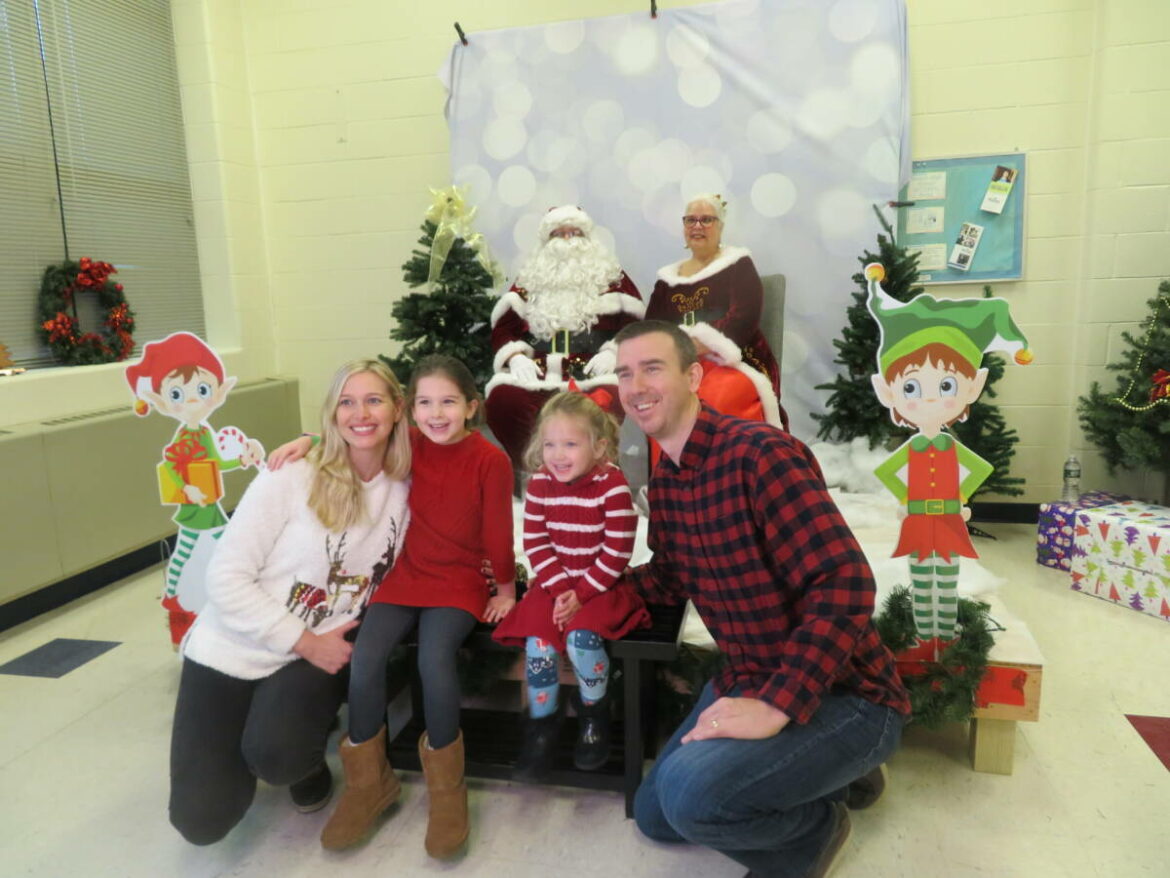 Kelly and Scott Rivera and their children, Madison, 6, and Riley, 3, pose for a photo with Santa and Mrs. Claus at the Monroe Playground Foundation's Breakfast with Santa at Masuk High School Saturday morning.

MONROE, CT — Children created their own Christmas ornaments and wrote letters to Santa, which were mailed directly to the North Pole, as families shopped at the Holiday Store and feasted on country-style breakfasts that included eggs, pancakes and bacon among the menu options. Saturday morning’s Breakfast with Santa event at Masuk High School raised money for The Wolfe’s Den Playground project.

The breakfast, which featured live Christmas music and photos with Santa and Mrs. Claus, was also an effort to attract volunteers for the community build in May, when the new playground will be built to replace the wooden Kids’ Kreation Playground at Wolfe Park. 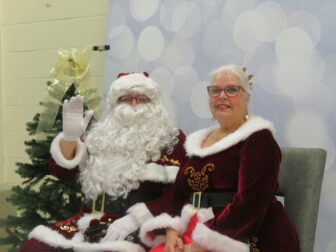 Craig and Sue Cornut starred at Santa and Mrs. Claus during the Monroe Playground Foundation’s breakfast at Masuk Saturday morning.

Mike Ganino, vice chairman of the Monroe Playground Foundation, said about 800 meals were served at Saturday’s breakfast, which had three seatings.

Amanda Bean, a MPF board member and the volunteer coordinator, said the breakfast was short volunteers as late as Friday morning. She said teachers at Masuk High and Jockey Hollow Middle schools encouraged students to volunteer and Ganino offered to double their volunteer hours.

By Friday night, Ganino said 30 to 40 volunteers, young and old, helped set up the Masuk cafeteria for the breakfast, adding a lot of the students asked if they could also volunteer during the event the next morning. 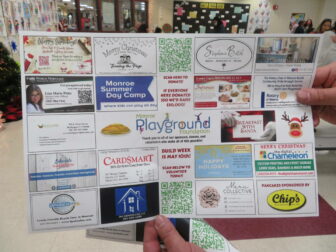 Local businesses came forward to sponsor the Breakfast with Santa Saturday and support the new playground project for Wolfe Park.

Aside from volunteers coming through, Ganino said local businesses came forward to sponsor the placemats, filling every ad space. Diners could scan QR codes on the mat with their cellphones to donate and to volunteer for the community build.

Bean said 2,000 volunteers will be needed for the community build, which starts on May 10. “You don’t have to know how to build,” she said. “We need people to help with the child care service, food service and clean up crew. We need different skills.”

Saturday’s entertainment included the Harmony on the Sound Chorus, a women’s barbershop-style chorus from Trumbull, and the Masuk High School Choir. The event also had raffle prizes.

Craig and Sue Cornut played as Santa and Mrs. Claus at the breakfast. Bean said the couple also played the roles at the Monroe Playground Foundation’s Pictures with Santa fundraiser at Great Hollow Lake.

The MPF has held fundraisers for The Wolfe’s Den for about four years in an effort to raise the $400,000 needed for the new project. It’s at around 65 percent of its goal and Keene expressed his belief it will be met by the build date.

“The biggest thing with all our events is being active in the community, bringing people together and hopefully they’ll come out and build,” Keene said.

The second annual Light Up Monroe, a friendly competition among homeowners for their displays of Christmas lights and decorations, is another fundraiser that recently got underway.

“I love how synonymous with Christmas the Playground Foundation has become,” Keene said with a smile. 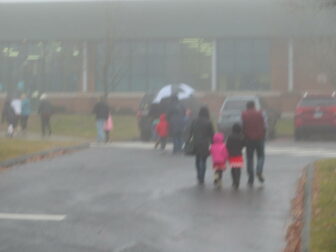 Families came out on a rainy Saturday morning to support the Breakfast with Santa at Masuk High School. The event was a fundraiser for the new playground at Wolfe Park.

Bean’s husband, Jason, is also involved with the MPF, serving on the Construction Committee. She said they got involved to meet people and make new friends after moving to town from Stamford a few years ago.

“They put out a request for a volunteer coordinator, so I thought I would give it a try,” Bean recalled. “I didn’t know what it entailed, but I thought I’d step up and help — and here I am three years later.”

The Beans’ children, Isaac, 6, and Brenna, 3, will be able to enjoy The Wolfe’s Den.

“My kids love the wooden playground at Wolfe Park but it’s desperate for repairs and I want to get a new playground built for my kids,” Bean said. “They’re very excited about it.”

The Breakfast with Santa was a hit with families.

In the Masuk parking lot, Shannon Ianni pushed a stroller with her son, Brayden, 1, as her daughter, Kennedy, 3, walked alongside them in the drizzling rain. The young family was leaving the breakfast.

“It was fun,” Ianni said. “I think it’s great for the kids. They have fun stuff for kids. It’s well organized. We love playgrounds, so we’re very happy to support the project. It’s something they can use when they get older.”