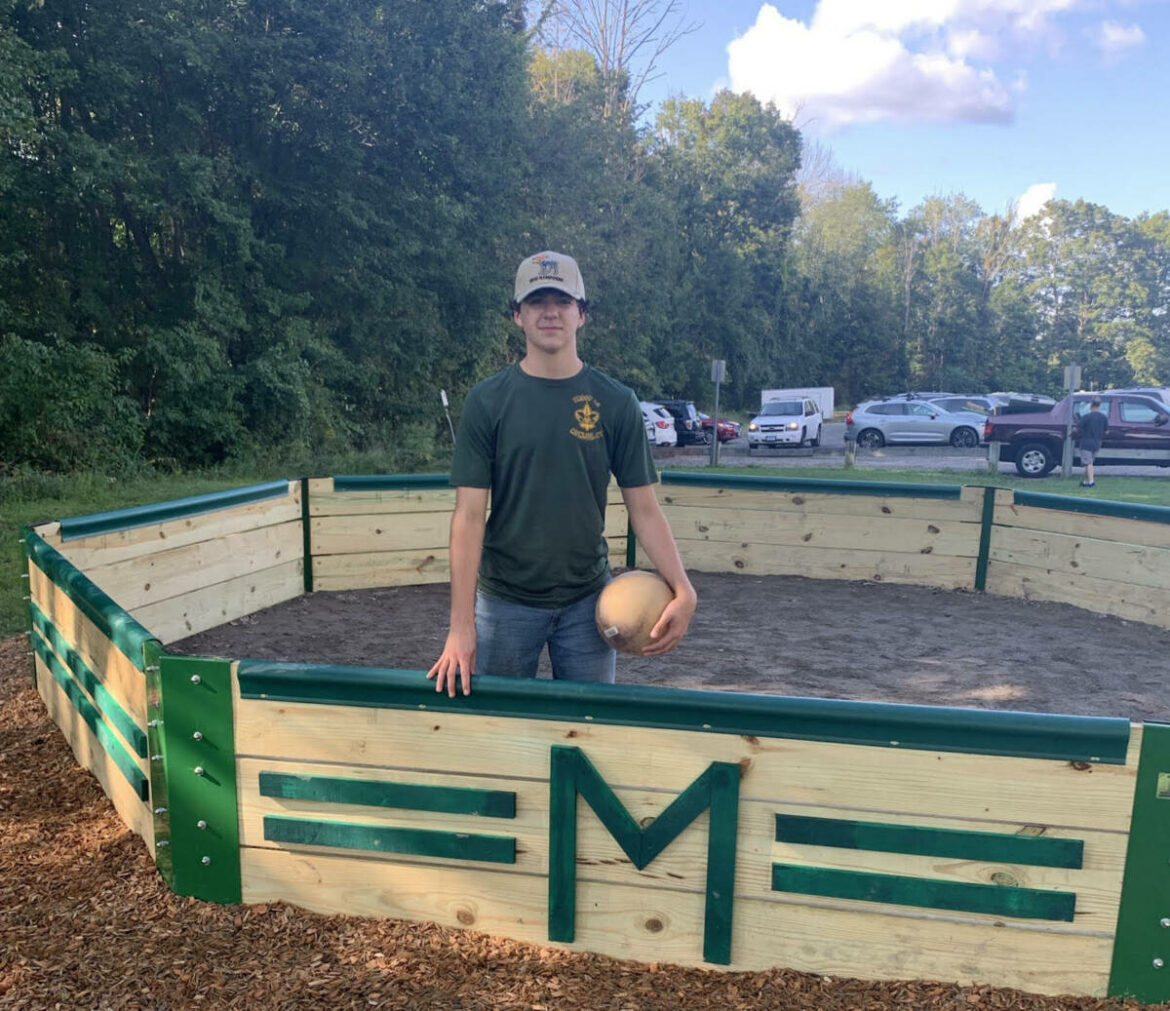 MONROE, CT — Children who enjoy playing gaga ball, a game similar to dodge ball, can now frequent a gaga ball pit near the overflow lot at Wolfe Park. It was built for Boy Scout Noah Malewicki’s Eagle Project this summer.

Malewicki, 17, a Masuk High School senior, has been in scouting since the first grade when he joined the Cub Scouts.

“I came up with the idea for a gaga ball pit for my project, because it’s something that always brought amazing times at summer camp — a game me and my friends would play for hours during those summer camp days,” Malewick said. “I felt I needed to share that joy with the kids in town and have our very own pit in Wolfe Park — inspired by the ones at Camp Sequassen.”

During Construction, Malewicki managed fellow Boy Scouts from Monroe Congregational Church’s Troop 63 on two Saturdays, managing 20 on Sept. 4 and around 15 on Sept. 18.

“I am so excited to add a second gaga pit to Wolfe Park and thankful that Noah chose Monroe Parks and Recreation as the recipient of his Eagle Scout project,” she said.

“This popular game is a great addition to our facilities for visitors to use,” Orosz continued. “This allows us to have one at the pool side of the park to go with the one already at the lake. I anticipate a lot of use by our Summer Fun Days Camp program, picnic rentals, sports leagues and the community as a whole. He did a fantastic job and I can’t wait to see everyone using it.”

To play gaga ball, all players stand in the pit with one hand on a wall. The referee throws the ball into the center of the pit and the players scream “ga” for the first two bounces and “go” on the third bounce.

Once the ball is in play, any player can hit the ball with an open or closed hand. If a ball touches a player below the knee, even if players hit themselves, they are out and leave the pit. If a ball is caught on the fly, the player who hit it is out. Players can use the walls of the octagon to aid in jumping, but cannot permanently sit on the ledge. Players also cannot hold the ball.

A second ball can be thrown into play to speed things up. The last player standing wins the round.

From planning to construction

Once Malewicki came up with the idea for a gaga ball pit, he performed some brief research on the materials and location — which had to be changed later in the process — before presenting a rough plan for his project to the Parks and Recreation Commission.

“After that presentation, I was free to begin narrowing down those rough ideas into my solidified plan, which I had outlined over time,” Malewicki recalled.

Once he had town approval, Malewicki sought financial donations and materials.

“This was one of the most challenging parts,” he said of the project. “It required the most patience and social skills I’ve needed to use in quite some time.”

Malewicki reached out to Sippin Energy for a contribution toward the purchase of a kit. Then he called D.R. Charles, which supplied a donation of mulch and stone dust for the playing area and area around the pit. 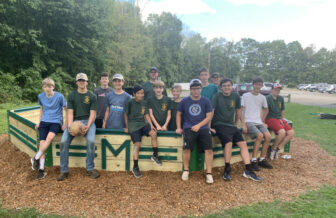 Noah Malewicki is grateful to his fellow scouts in Troop 63 for their hard work in building a gaga ball pit at Wolfe Park for his Eagle Project.

“Finally, I contacted Lowe’s, which took the most time, as I needed to find and speak to the store manager himself,” Malewicki said. “After all was said and done, we were granted all the lumber we needed for free. This was perhaps the moment I realized how much other people respected Eagle Scouts and those working towards the rank.”

Malewicki said he also had help from his mother and grandparents, who supplied food and beverages during the work days, so everyone could stay hydrated and full of energy.

He said the first day of construction began at noon and lasted six hours, though Malewicki was there earlier, doing preparation at around 7 a.m.

“Day two was mostly the finishing touches, so it took about four hours,” he said. “Outside of the actual construction, I put in over 30 hours of work, including research, asking for donations and other tasks related to the project.” 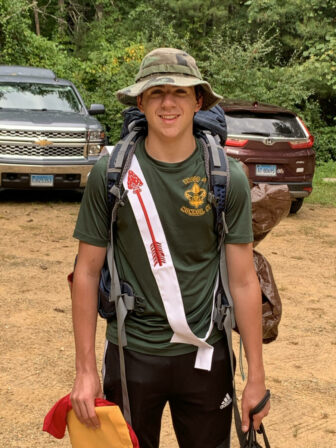 Noah Malewicki has enjoyed going on camping trips during his time in Boy Scout Troop 63.

Malewicki joined the Cub Scouts in the first grade and crossed over to the Boy Scouts at the end of fifth grade. Ed Gratrix is the scout master of Troop 63 and Malewicki’s father, Joe, is assistant scout master.

“I really enjoy going camping with my friends and fellow scouts, as well as learning and improving my outdoor skills,” Noah Malewicki said of scouting. “I think it’s a great, safe place where I have experiences I would have never had if I didn’t join.”

Among his favorite adventures in scouting are the annual trips to Camp Sequassen, a week in which scouts learn new skills and have competitions involving intelligence and athleticism against other troops.

“This tends to be a highlight of every summer,” Malewicki said. “Some other amazing trips I’ve had were visiting West Point Academy, sleeping in forts in the snow in freezing temperatures and, just recently, hiking the White Mountains in New Hampshire with a small group.”

Being a Boy Scout may influence Malewicki’s career choices after school.

“I’m not positive about what I want to do in the future, but I have strong interests in space, psychology, physics and the outdoors … obviously,” he said.

Scouts must demonstrate proficiency in leadership, service and outdoor skills at multiple levels before achieving the Eagle Scout rank. In 2019, before the COVID-19 pandemic, only 8 percent of all Boy Scouts in the nation earned the Eagle rank.

Malewicki’s father earned his Eagle Scout rank as a Boy Scout growing up in Monroe. His Eagle project was at Webb Mountain Park, when he led scouts in building a retaining wall and fire pond for firefighters 30 years ago.

“Strangely enough, I really didn’t start putting my head down and working for my Eagle until late in the ninth grade,” Noah Malewicki said. “For a while I was considering quitting scouts, however, after speaking with my parents and remembering how my father got the rank of Eagle, the competitive spirit in me said I had to get it just like him.”

“I don’t think there was a specific moment that sparked my motivation to work for it,” he added. “If anything, it was the realization of the honor it would be, and how small the percentage of scouts who earn it really is.”

Malewicki had been a maintenance worker at Wolfe Park last summer, inspiring his idea for a gaga ball pit.

While planning the project, he could always lean on his father for advice. “I would also like to recognize Paul Lesiw, a second mentor to me since Cub Scouts,” he said. “His son received the Eagle last year in our troop, so he was great in giving me advice and helping during the project construction. He also provided helpful transportation of the lumber and some tools with his pickup truck.”

Malewicki also gave recognition to Gratrix for being his project coach and to Missy Orosz. He said both gave advice and ensured he got all of his paperwork done. Now he will submit his Eagle application to the Board of Review within his troop.

“Once those are completed in order, I will officially be able to start planning my Eagle Court of Honor,” Malewicki said. “I want to have a ceremony at the park, so I can include nature, which I love so much, and then have a picnic with food and games, and make sure to play gaga ball with the whole troop. It will most likely be next spring, as the weather is getting colder.”

“I believe my Eagle project was a great success, and I think kids will have the same fun I did when playing gaga ball,” he said. “I think it made the area where it’s located a lot more attractive and brings life to that corner of the park. After seeing children playing in it, mere minutes after construction was finished, I think it’s safe to say it was a good idea and a good addition.”