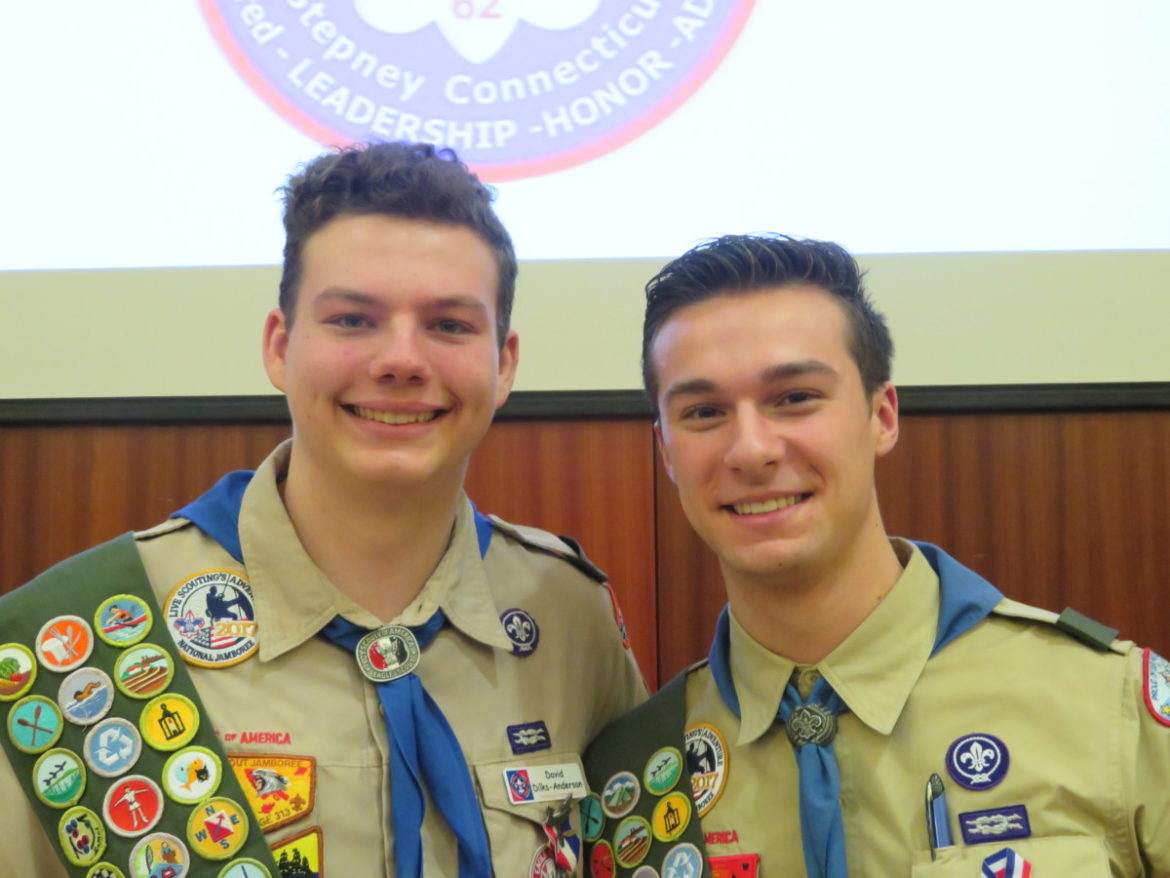 David Dilks-Anderson, left, and Eric Romansky earned the rank of Eagle in a ceremony at Sacred Heart University Saturday.

David Dilks-Anderson and Eric Romansky joined the Cub Scouts the same year and grew up together in scouting, earning their way through the ranks, from Tenderfoot, Second and First class to Star and Life. On Saturday the two friends shared the spotlight in the Eagle Scout Court of Honor.

During Boy Scout Troop 62’s ceremony in the University Commons Auditorium at Sacred Heart University, Romansky and Dilks-Anderson were awarded their Eagles, the highest rank a Boy Scout can achieve.

“The Eagle Scout award is the highest and most coveted award in scouting,” said Scoutmaster Eric Anderson, Dilks-Anderson’s father. “Fewer than four-percent nationally earn the rank.”

David Sippin, president of the Boy Scouts of America Yankee Council, who also earned the rank of Eagle in Troop 62, the troop of which his father Bernie was a founding member, said it is so significant that it is the only childhood award included in resumes and mentioned in obituaries.

The scouts thanked and exchanged pins with their parents and other mentors. Romansky’s proud parents are Tina and Brian and Dilks-Anderson’s are Eric and Kathy.

Matthew Dilks-Anderson, David’s brother, whose own Eagle ceremony had inspired him, served as master of ceremonies.

A Boy Scout learns skills, such as how to cook, administer first aid and live outdoors, and helps his community. He must earn a minimum of 21 merit badges and plan and lead the completion of an Eagle Scout project to earn his Eagle. The project is judged by the troop council to ensure it meets all of the criteria.

Dilks-Anderson’s Eagle Scout Project was the creation of an outdoor classroom by the shade of the trail at Stepney Elementary School. It was named in honor of Principal Bruce Lazar.

In a letter read at the ceremony, Lazar said Dilks-Anderson and his crew should be commended for the craftsmanship in the project and added how honored he was for it to be named after him.

For his project, Romansky planned the beautification of the entrance to Webb Mountain Discovery Zone, working for months with Director Tom Elbogen and a landscaper to choose and acquire the right plantings, then assigning scouts to different tasks and ensuring the work was done. Romansky also secured donations for a permanent bench built on the site.

Romansky received a Certificate of Commendation from First Selectman Ken Kellogg for his project.

Elbogen said Romansky was intent to do everything perfectly and recalled how the team of scouts cleaned out all of the roots and rocks, before haying and seeding the swale area, which spans hundreds of feet — all in one day.

In June, Elbogen said Romansky added to the project by building, placing and cementing a bench in the parking lot area.

“I am so happy that Eric has achieved the rank of Eagle,” Elbogen said. “He really earned it throughout the four months Eric worked with us, displaying strong organization and communication skills, a clarity of purpose, tenacity, perseverance and poise, a willingness to ask questions and provide thoughtful feedback, and above all by displaying a strong sense of conscientiousness and leadership.”

Among those Romansky worked with were local horticulturist Ken Twombly, Benedict’s Home and Garden and the Monroe Public Works Department.

Trudging through the muck 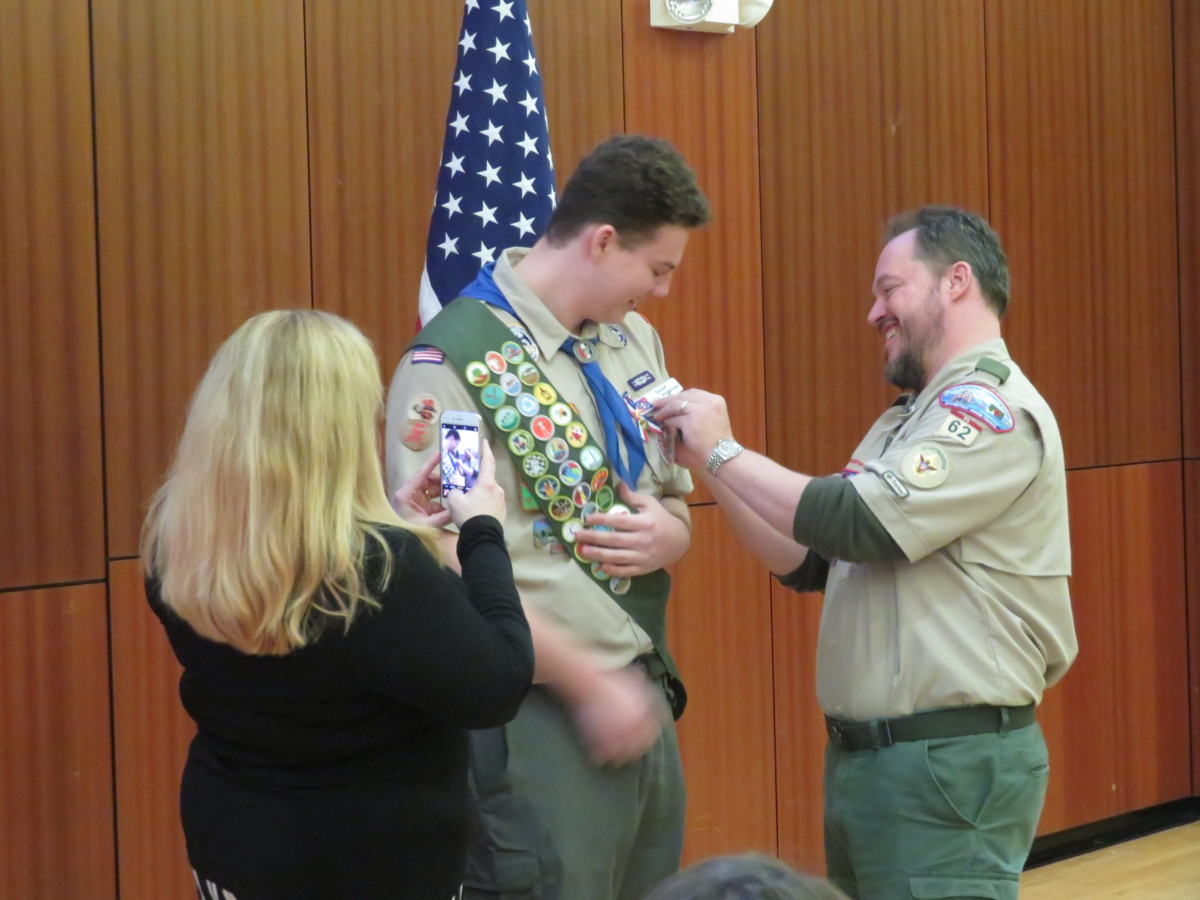 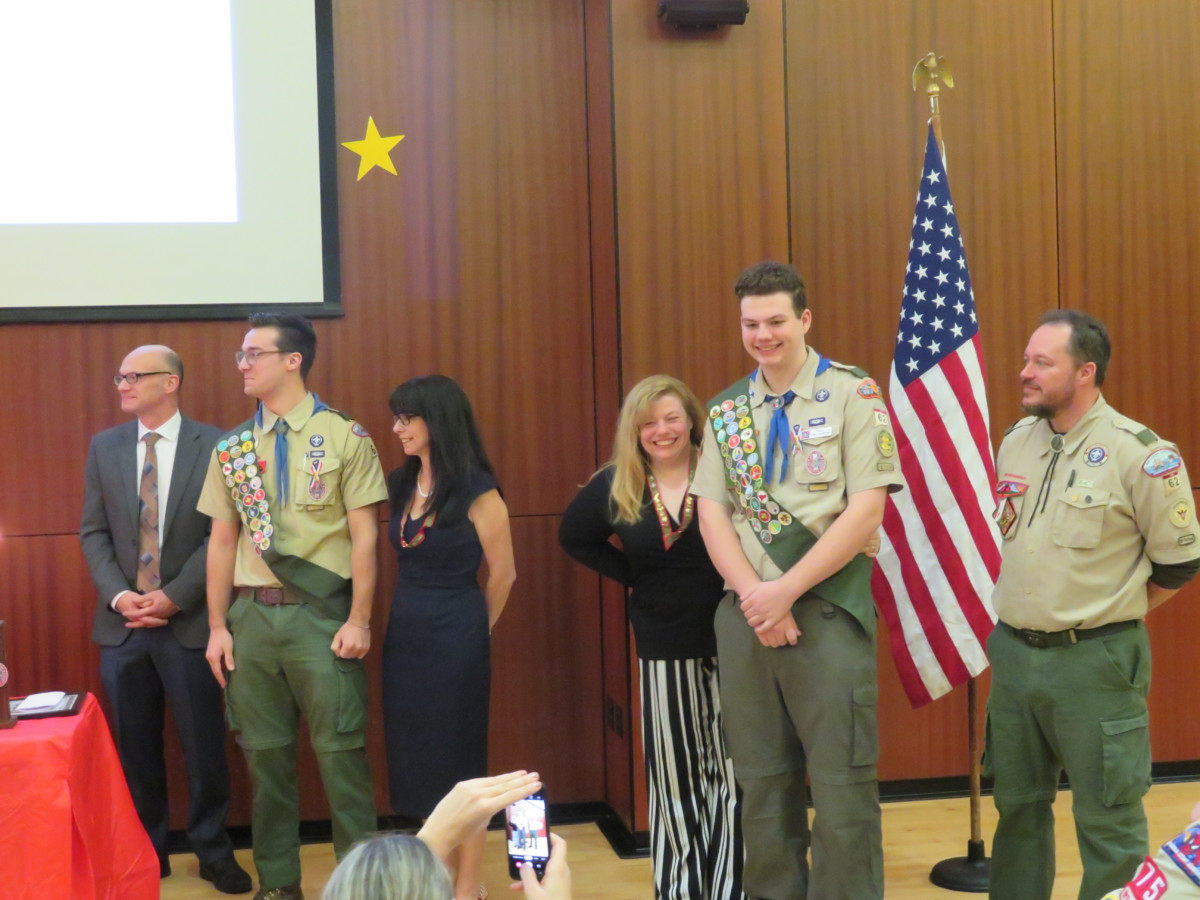 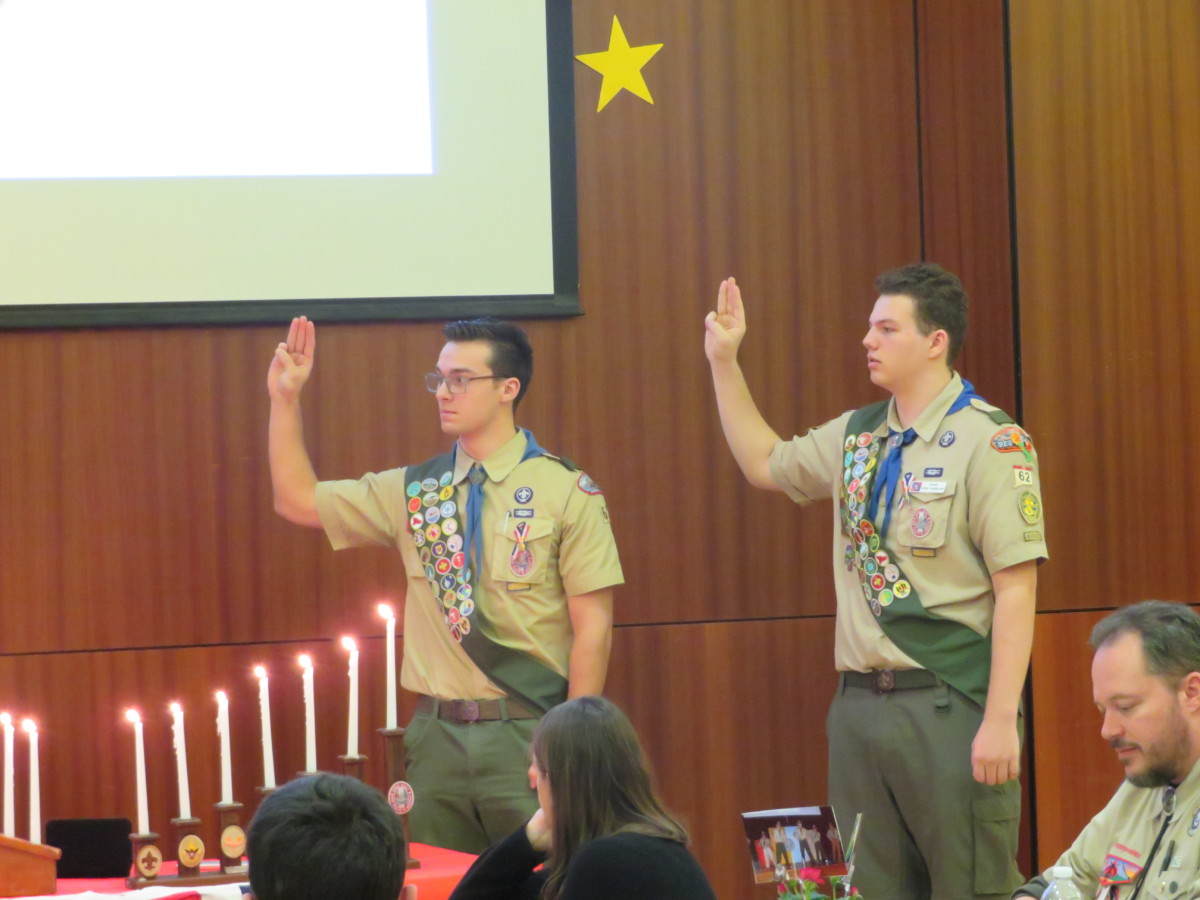 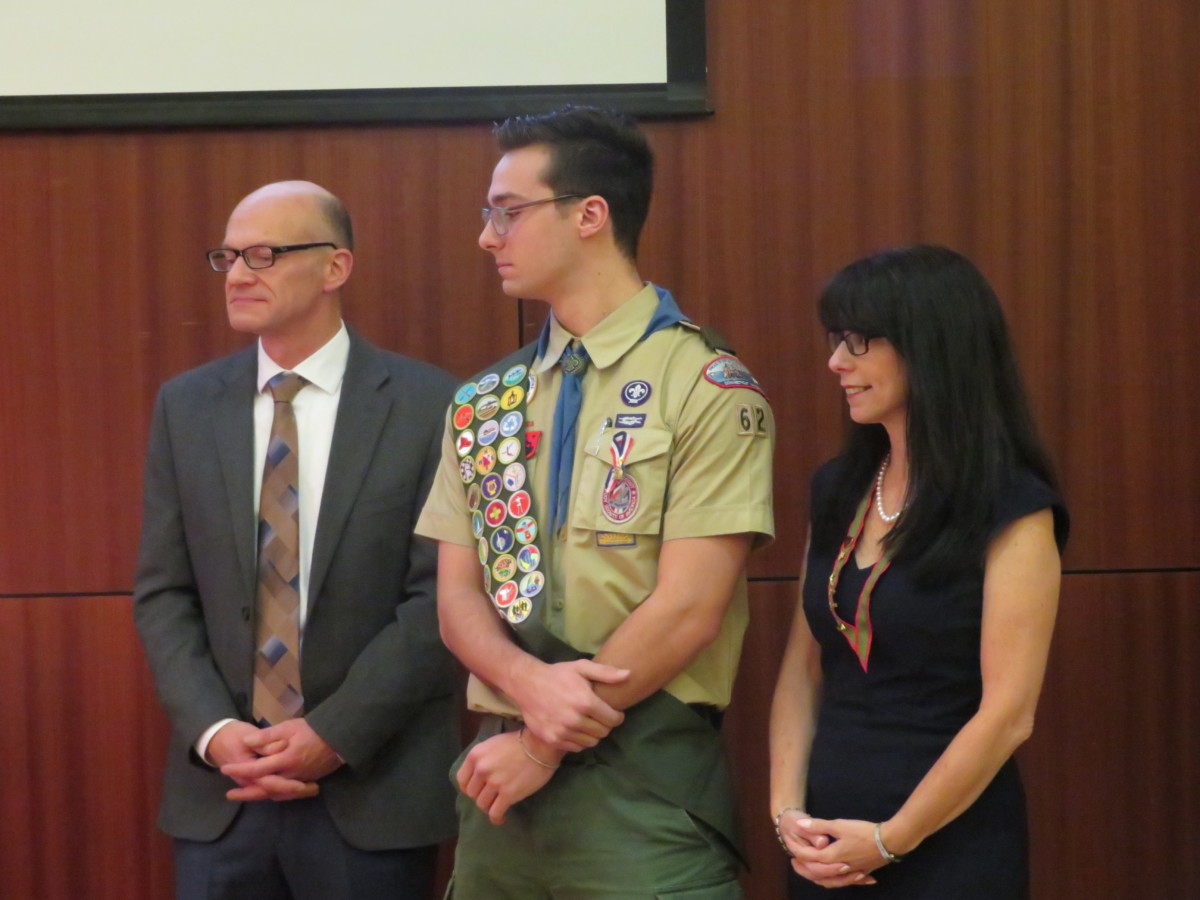 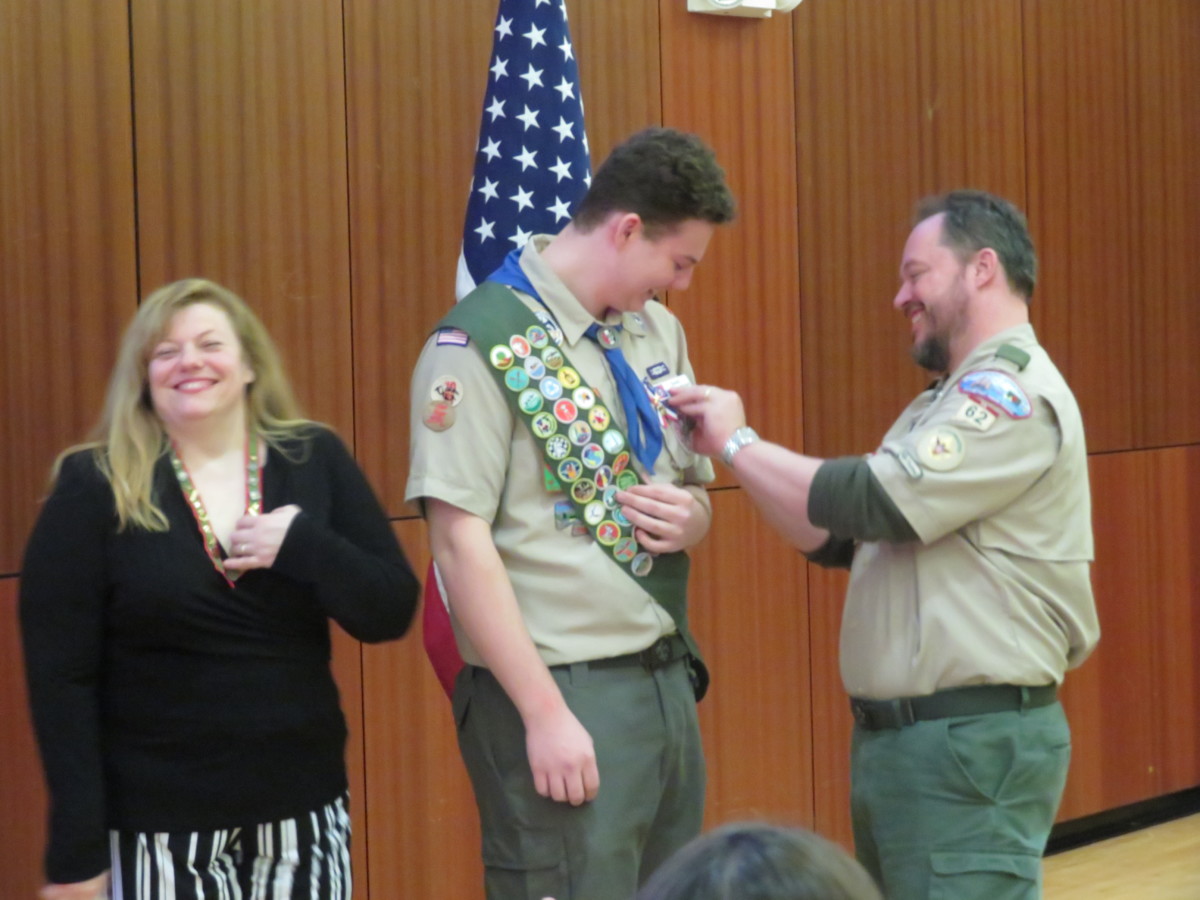 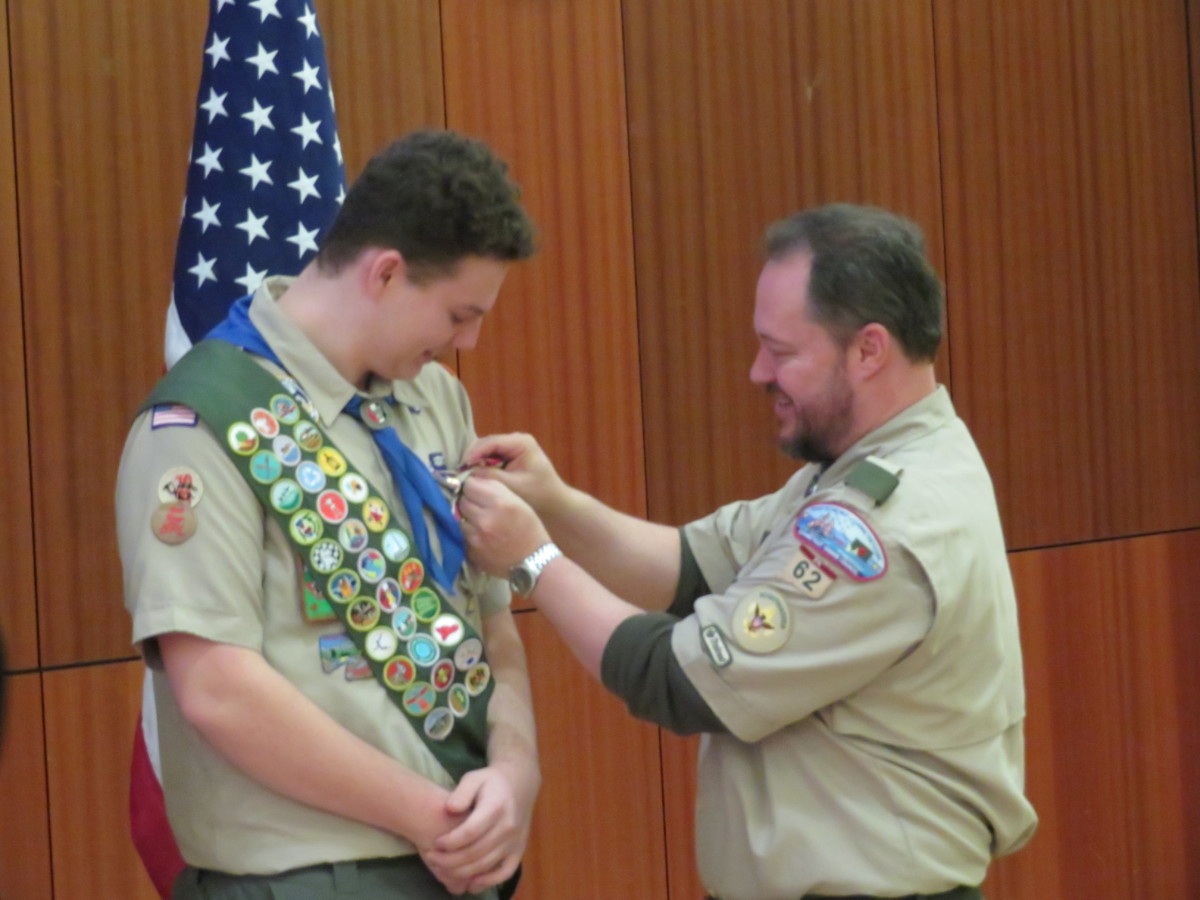 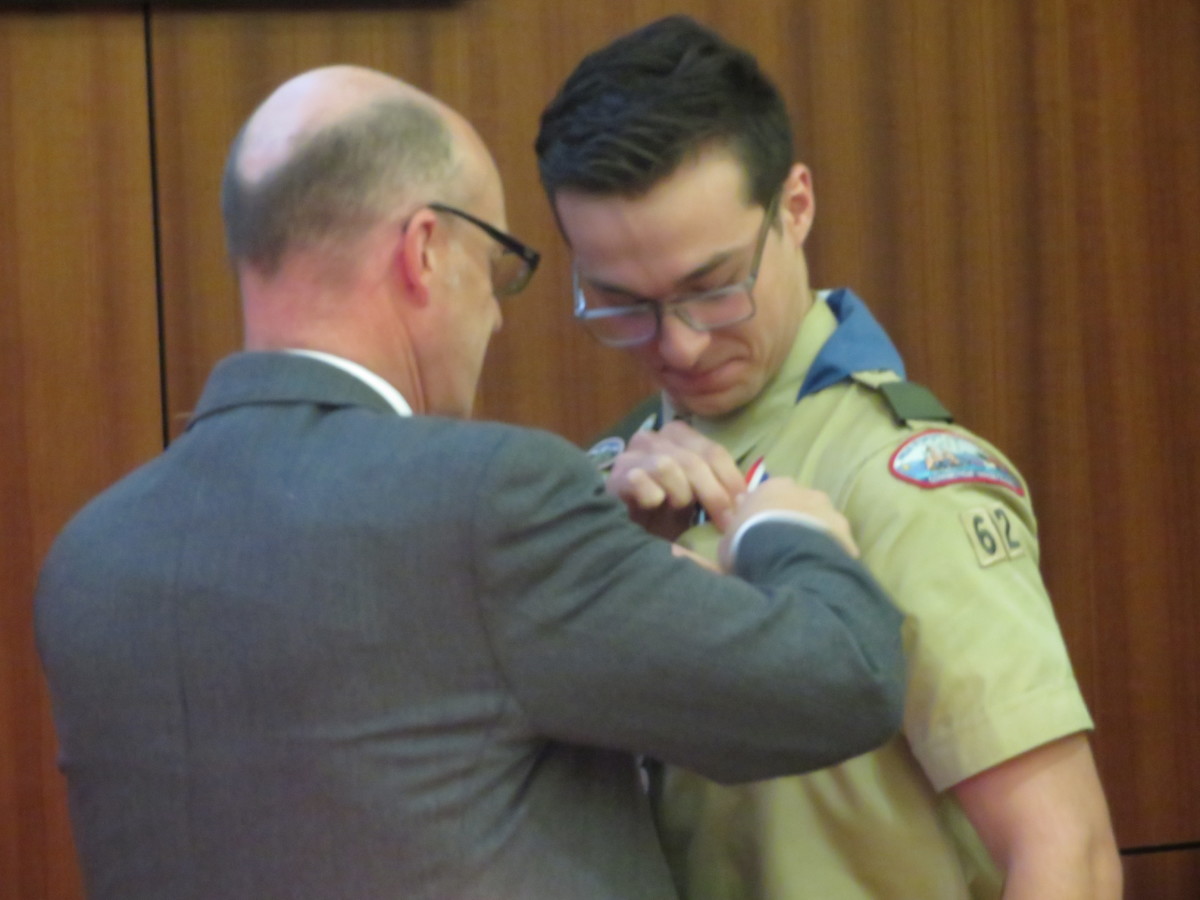 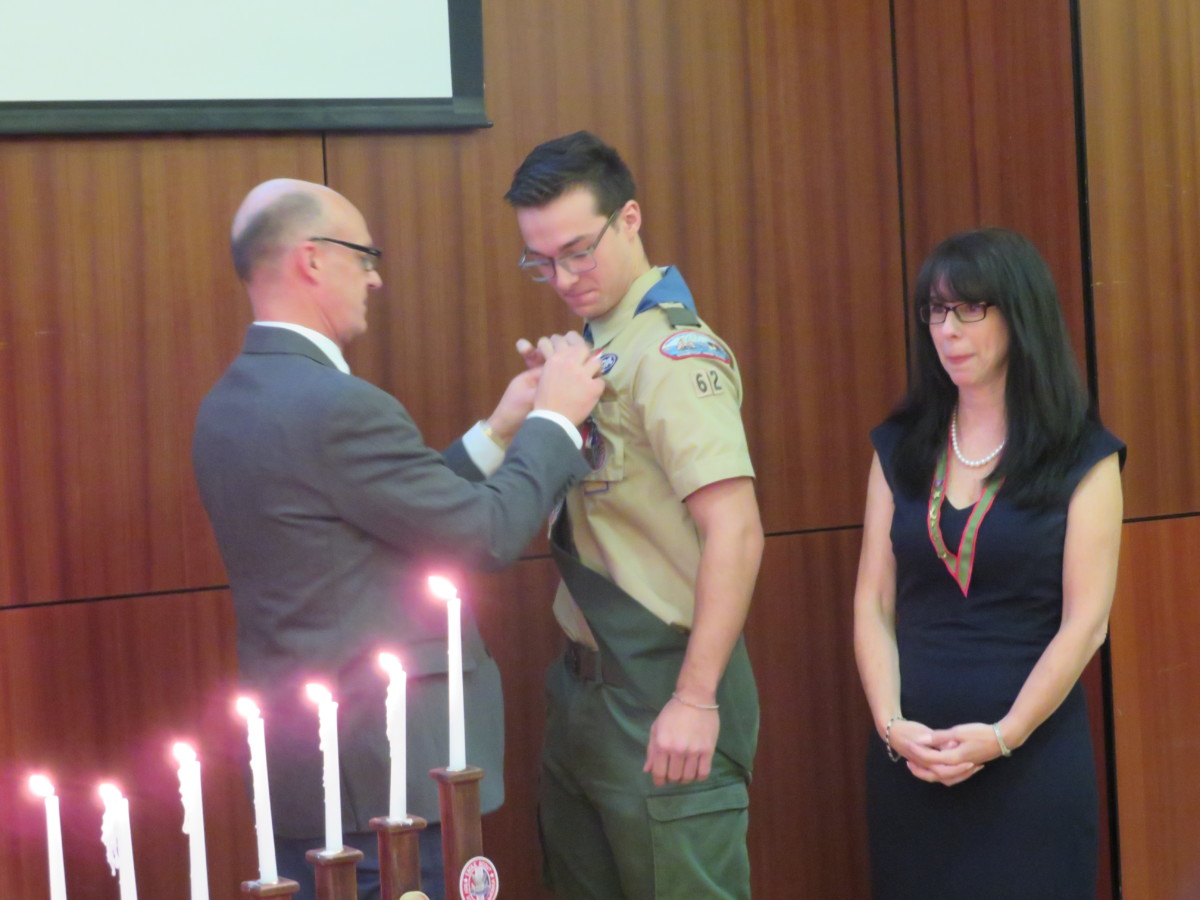 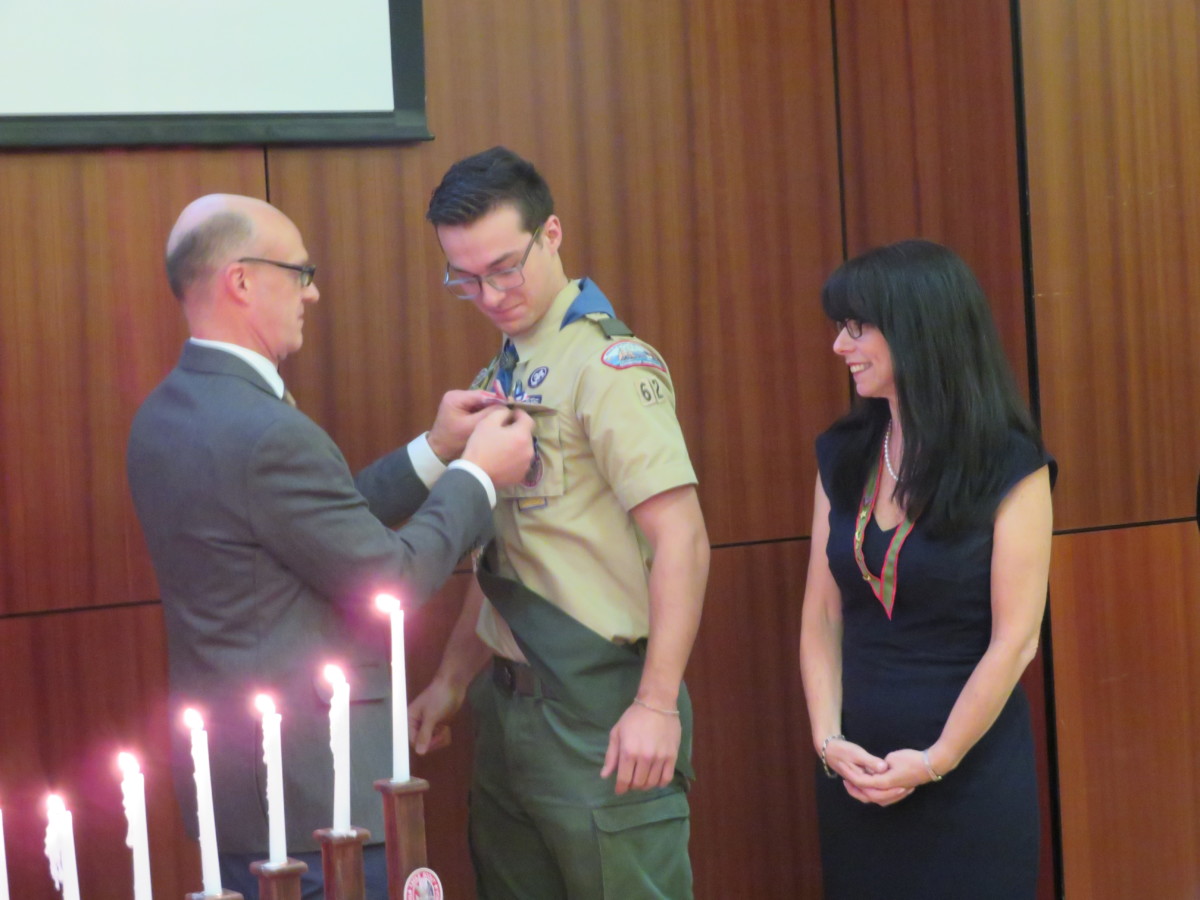 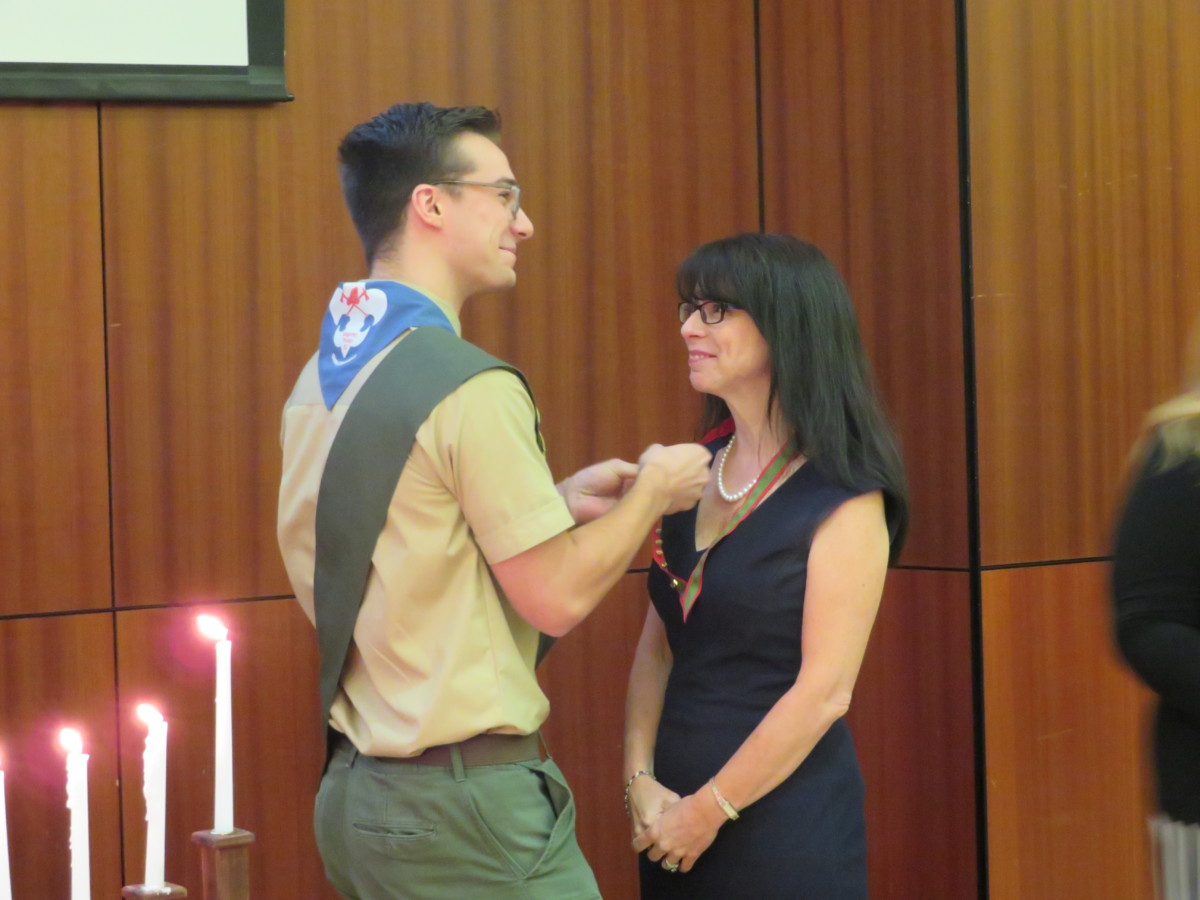 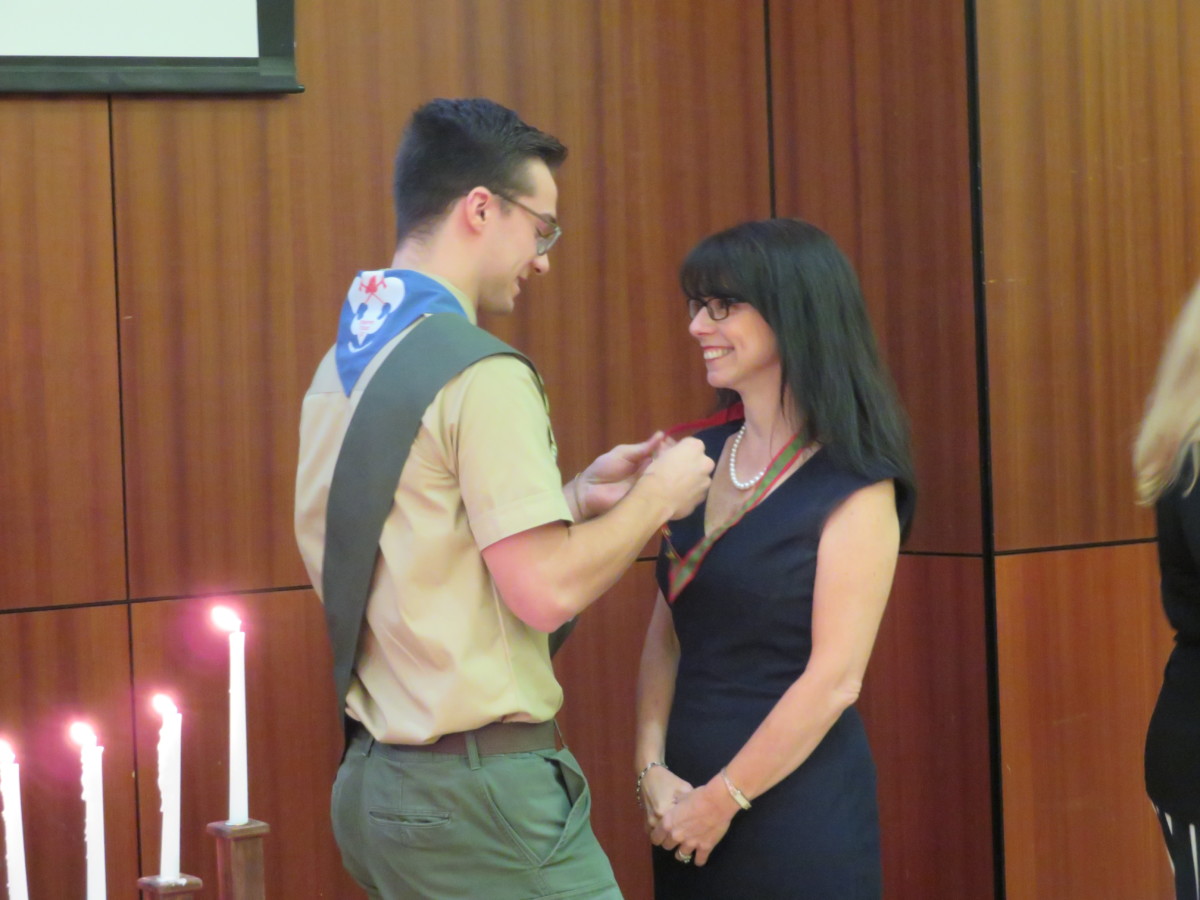 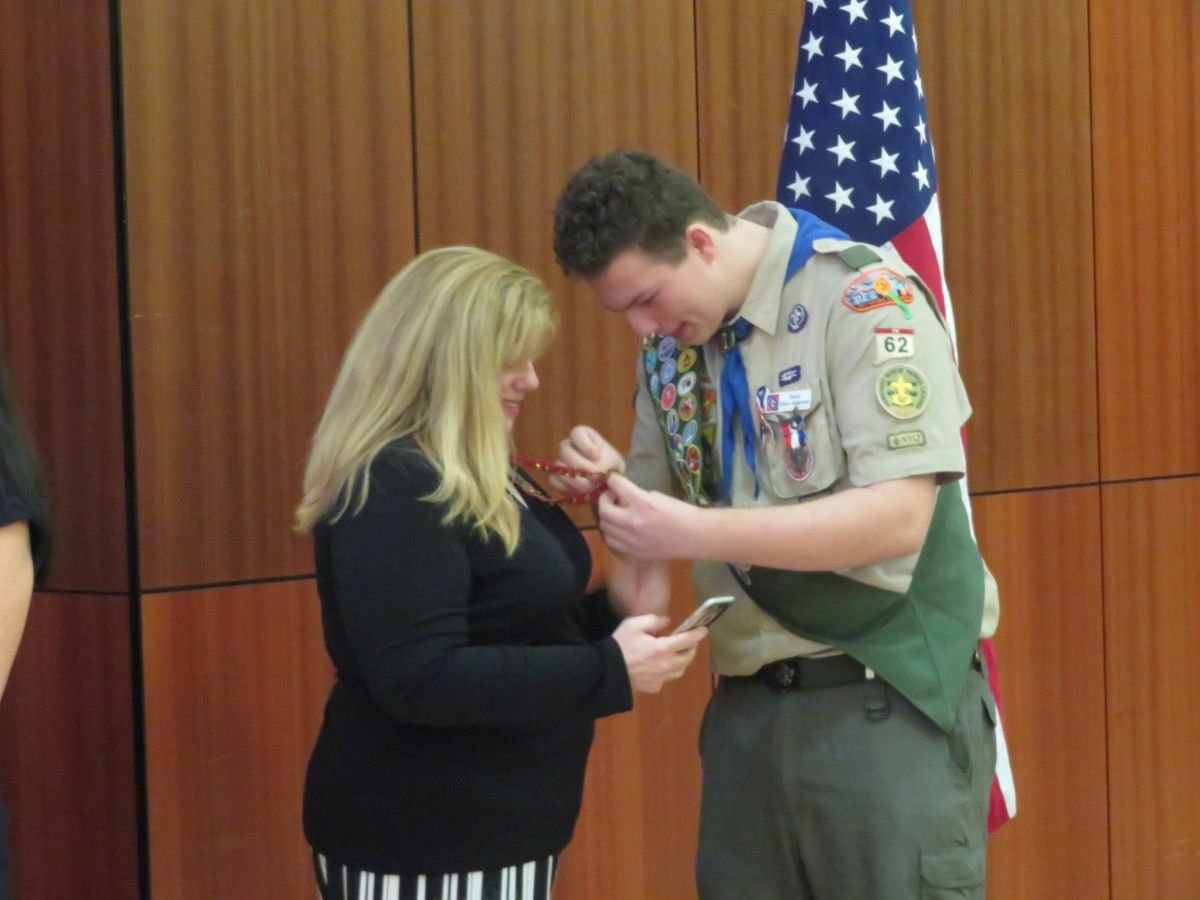 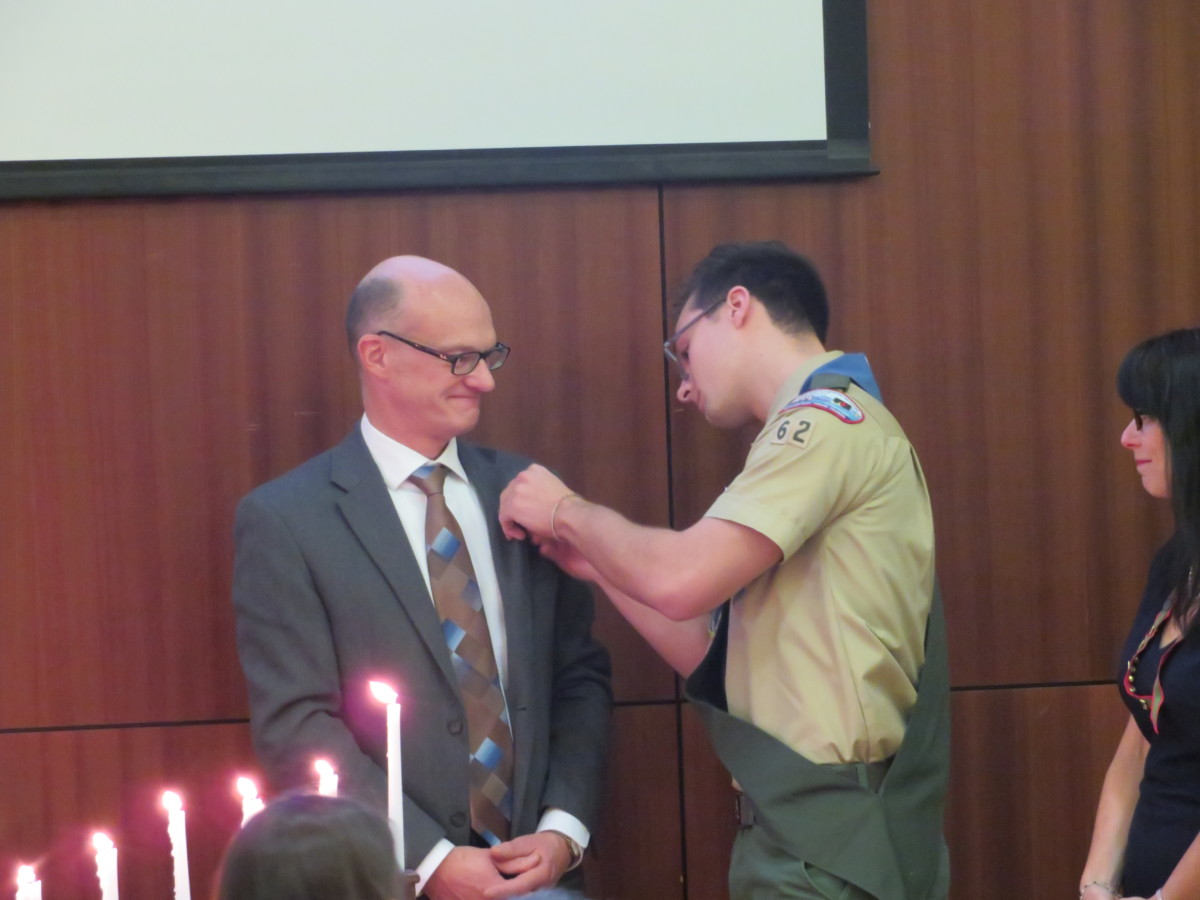 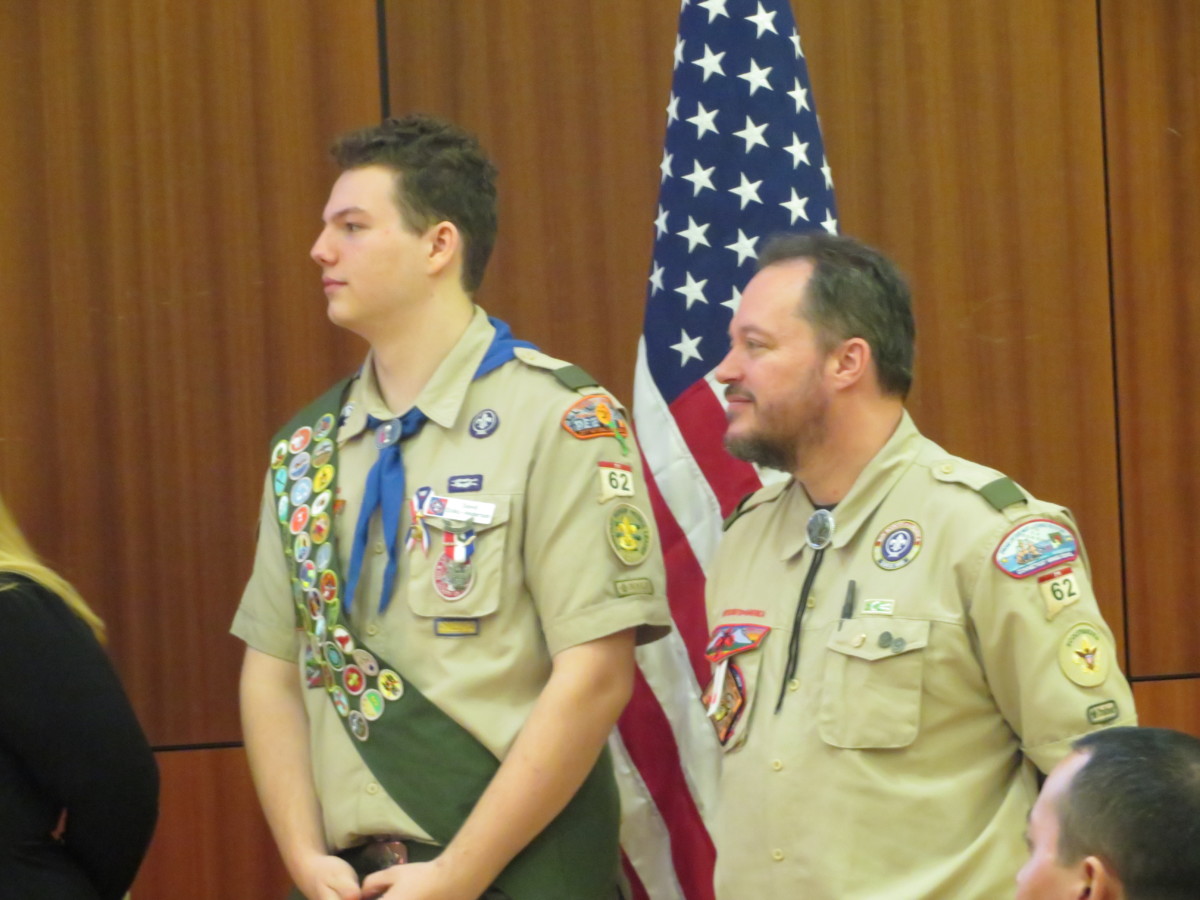 Dieter Loescher, assistant scout leader for Troop 62, recalled how Dilks-Anderson and Romansky showed traits of an Eagle Scout early on, even when they still had so much to learn. For example, Loescher said they would pull a kid aside and teach him to tie knots without being asked.

Loescher said both showed tremendous growth during a 75-mile-canoe trip in Maine.

Romansky said it was one of the most difficult trips and the most memorable. Dilks-Anderson admitted to being immature at the beginning of it.

Amid harsh weather conditions, the troop had trudge through waist-deep mud for a mile, while carrying their equipment and canoes.

Dilks-Anderson said he took the heaviest bag, with pots and pans inside, because he was told he wouldn’t have to carry a canoe, before adding that was not the case.

“I tripped and fell,” he said. “I was about to quit. Then a switch flipped in my head, ‘I need to fix my own problems.’ I picked the pack up. I lugged it.”

Instead of stopping when he got to his destination, Dilks-Anderson said he immediately decided to go back and help his fellow scouts.

“After that trip, I was seen with different eyes,” he said, adding you should always help others above yourself.