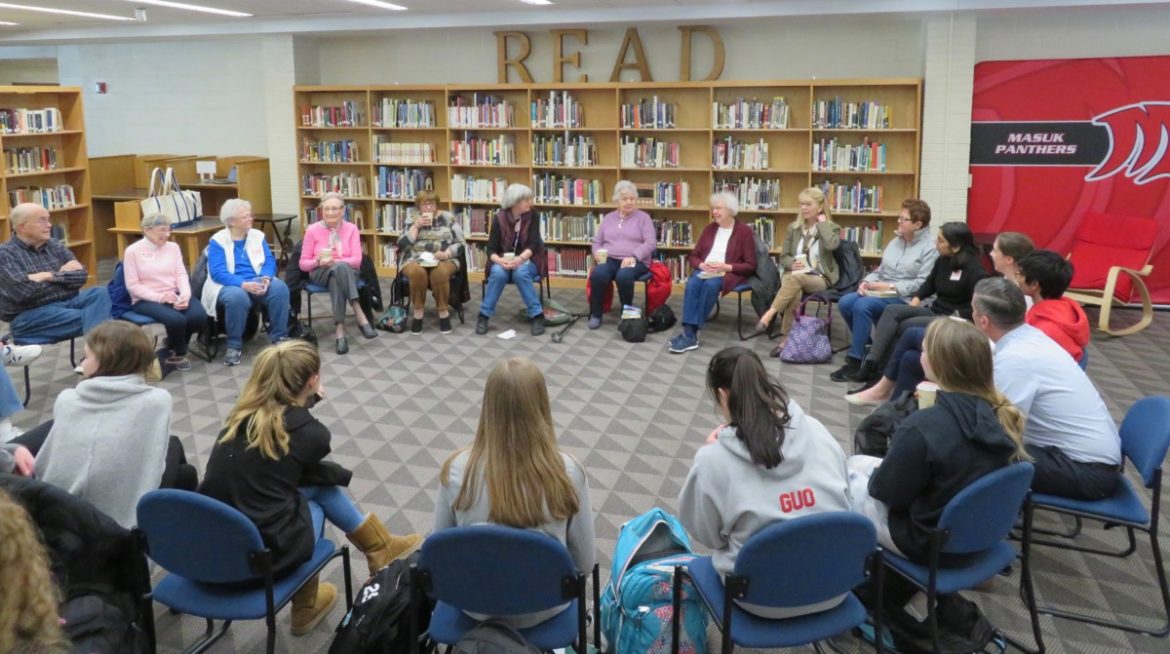 Student and Monroe Senior Center book clubs get together for a discussion in the Masuk media center last Thursday.

MONROE, Conn. — Michael Crowley talked about TV shows to illustrate generational differences during a conversation with a group of senior citizens inside the Masuk High School media center last week.

“I grew up with ‘Laverne & Shirley’ and ‘Happy Days,'” said Crowley, an instructional leader for English-language arts at Masuk. “Kids are exposed to more existential things like ‘Black Mirror.'”

Last Thursday, the book, “Elsewhere,” by Gabrielle Zevin, brought teenagers and members of a Monroe Senior Center reading group together, as they discussed the adventures of 15-year-old Liz Hall, who died and ended up in a place called Elsewhere, where nobody ages and time moves backwards, until its inhabitants are reborn as babies on Earth again.

Lauren Guo, a junior who read “Elsewhere” a few years ago, chose the book for the book club meeting. “It was better when I was young,” she said. “I wasn’t as critical of the book back then. As a kid, I thought it was exhilarating, because it was a possibility of the future.”

Everyone sat in a circle, including 10 students, six Masuk staff members and 20 senior center patrons. 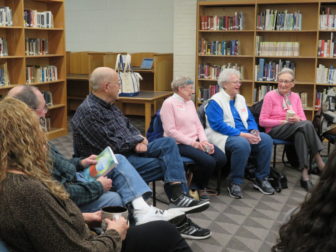 The discussion on “Elsewhere” by Gabrielle Zevin is in full swing.

“I like the book in that it gave a different perspective,” said Meghan Braiewa, a junior, who is the leader of the Masuk Book Club. “My family’s religious, so it’s great to see a different idea. I also thought it was cool.”

“Do you like the idea of going backward in age?” Braccio asked.

“No. I’m working toward college and would like that opportunity,” Braiewa replied.

Nancy Kennedy, who was also with the seniors’ group, made everyone laugh when she joked how a more commonly held Christian belief of praising the Lord for eternity could get boring after 500, 600 years.

A connection is made

Last Thursday’s joint book club discussion was the second one. Crowley said the first was on, “Looking for Alaska,” by John Green.

“I don’t think we do this often enough,” he said. “They actually share a lot of opinions on the subjects and there are differences within the generations. It also brings out a culture of literacy. We share more similarities than differences.”

“The students were wonderful,” Gosselin said, adding it was great hearing the different perspectives.

Kathleen Ducharme, a librarian at the high school,  said, “I think this is a wonderful event, because in a normal life setting it appears seniors and high school students are just miles apart from each other in many ways. But when you bring them all together through a book, all of those differences and barriers are gone. They’re all talking about their experiences with that book and there are common threads that bring them together.”

“I think it went really well, because the contrasting ideas we contribute and the older generation does,” Guo said. “We see the book differently and you can come to an understanding of where the other side is coming from.”

“It’s just so rewarding,” she said. “Their humor, their acceptance, you just know how thankful you should be — and they put things in perspective and challenge your thoughts.”