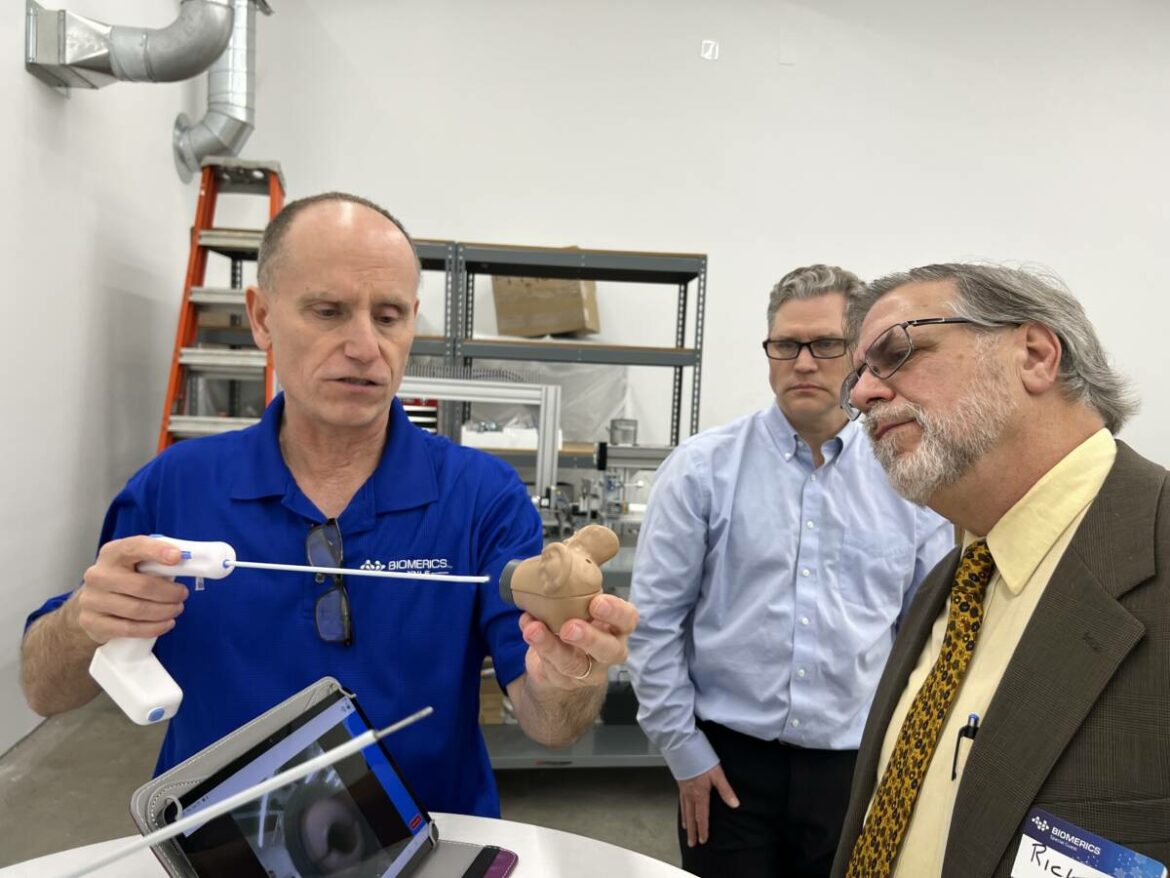 George Buzel, project manager of the Durado, demonstrates how to use the medical device during a tour of Biomerics NLE, 246 Main St., Friday afternoon.

MONROE, CT — George Buzel held a Dorado, a medical device shaped like a gun, in the research and development area of Biomerics NLE at 246 Main St. He inserted the narrow metal tip into a plastic model of a uterus and looked at a monitor, which showed video of the inside of the model. This allows doctors to steer the device, while looking for polyps or other abnormalities.

“A doctor doesn’t have to put as much pressure on the cervix, which causes discomfort for the patient,” said Buzel, project manager of the Durado.

This is just one example of the medical tools Biomerics develops for its partners. The vertically integrated medical device manufacturer has grown dramatically over the past few years, allowing it to expand its facility on Main Street. 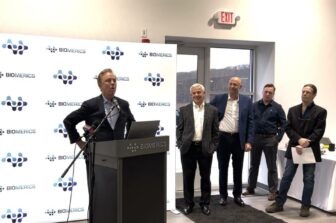 On Friday, the company celebrated its updated facility with a ribbon cutting ceremony. The guests included Gov. Ned Lamont, First Selectman Ken Kellogg and Alexandra Daum, commissioner of the Connecticut Department of Economic and Community Development.

“This is a celebration of 30 years of hard work and setting ourselves up for the next part of our journey with this new building, and the support has been amazing,” Rich Rosselli, president of Biomerics east operations, said from behind the podium.

Northeast Laser & Electropolish was founded in 1992, opening in a building on another property owned by Sippin Commercial Properties, before moving into the back of a 62,000 square foot building on the Sippins’ property at 246 Main St., its current location, in 2000.

The company had been involved in the medical device industry for 25 years when it merged with Biomerics in 2019. This was like adding “rocket fuel” for the company’s growth, according to Rosselli.

Biomerics NLE kept things level that first year, during the COVID-19 pandemic, before its profits grew from $20 million to $35 million in 2020-21, then to $58 million last year, Rosselli said.

This period was marked with a “great reputation” with its customers and the low turnover of its workforce at under 10 percent, while hiring 79 new employees. To meet increasing demand, Biomerics took over the entire building at 246 Main St., adding over 21,000 square feet to its space.

Rosselli said Biomerics is like a family. Though there was not enough room for everyone to attend Friday’s ribbon cutting ceremony, the company’s longest serving employees were invited. Rosselli credits them with establishing the culture that makes people enjoy working there.

The front of the building at 246 Main St. had also been leased by Maltose Express and Veracious Brewing Company, and Warehouse Wine & Spirits, the latter which relocated to Century Plaza at 535 Monroe Turnpike — another Sippin Commercial Real Estate property — to make way for Biomerics’ expansion.

During Friday’s event, Rosselli thanked the Sippins for their role in allowing Biomerics to stay in Monroe.

“Every time we needed a space, it was ‘Gary, Dave, Mark, where can you put us? How can you get us more space?'” he said of the Sippin brothers, “and they came through every single time.”

“They have been the most amazing partner in this journey with us,” Rosselli said, “and they put up a huge investment in this building with the trust that we’re going to be successful and be here a long time, and we’re going to live up to that part of the deal. We wouldn’t be here without them.”

“We’ve enjoyed a 30-year partnership with Biomerics NLE, who has grown from a small startup to one of Monroe’s largest employers with this new 62,000 square-foot R&D manufacturing facility,” said David Sippin, CEO of Sippin Commercial Properties. “The property and business will be a major contributor to Monroe’s tax base.”

Infinity Group, an architectural firm based in Hartford, designed the renovation and expansion.

Biomerics’ expansion in Monroe is not over. The company is planning to add more R&D space at 200 Main St. next door within a couple of months, according to Fulvio Damia, a production supervisor at Biomerics, who served as master of ceremonies Friday.

Biomerics has 350 employees at its three domestic micro metals locations (around 200 in Monroe) and more than 2,000 globally. Damia said the Monroe expansion is part of a plan to update all of its facilities.

‘A great day for Monroe’

First Selectman Ken Kellogg, who had attended the swearing in ceremony for Connecticut’s new Kid Governor Ellie Mendez, a Monroe Elementary School fifth grader, earlier in the day, said, ” this is a great day for Monroe.”

After thanking Lamont and Daum for attending Biomerics’ event, Kellogg said, “and governor, we’ve got great people. We’ve got great businesses. We’re on the map.”

The first selectman spoke of the town’s efforts to the promote economic growth in Monroe, praising William Holsworth, the community and economic development director; members of the Monroe Chamber of Commerce and the Monroe Economic Development Commission, as well as Ray Giovanni, who leads both. 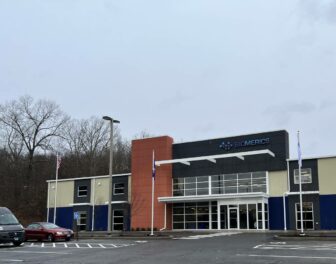 “It is truly an honor to be here and help celebrate the success of Biomerics,” Kellogg said. “We are incredibly proud to have Biomerics here in the community.”

“Consistently among our top employers, Biomerics is providing just outstanding, excellent local job opportunities for highly skilled biotechnic engineering manufacturing devices, literally used to save lives,” he said. “You’re all saving lives here in the town of Monroe. Thank you.”

Kellogg shared his goal of offering “more robust” incentives to businesses to invest and remain in Monroe, making the town more competitive, while fostering growth of Monroe’s commercial grand list.

He said he wants to enhance the tax abatement program for businesses who invest over $500,000 in Monroe, and particularly for investments of over $5 million.

Daum said her office and the Lamont administration will assist Biomerics with any future expansion projects.

“You guys are on the front line of health care,” Lamont said. “You’re taking advantage of Moore’s law and miniaturization and what that means in terms of robotic surgeries, providing better health care for people and saving us some money along the way. It is transformative and I hope each and every one of you know you’re doing something incredibly important.”

The governor, who also visited Sikorsky on Friday morning, spoke of the trends in manufacturing, such as computerization, and praised Biomerics for its close relationship with Fairfield University’s engineering program.

The main entrance to Biomerics opens up to a spacious lobby, where the company’s blue logo is prominently displayed at the front desk. A flat video screen is on the wall above it. Glass walls look into offices and a conference room on the first and second floors.

After the ribbon cutting, group tours of the 62,000-square-foot facility were given, which included the roughly 50,000 square feet of manufacturing space. Areas included micro-machining, laser cutting and marking, laser welding, electro-polish and passivation, and an engineering lab for research and development.

Damia recalled when the company had “one little room with two lasers,” while starting out.

“The future looks bright,” Rosselli said. “I’m so thrilled to open this facility. Our first facility was the size of our board room.”