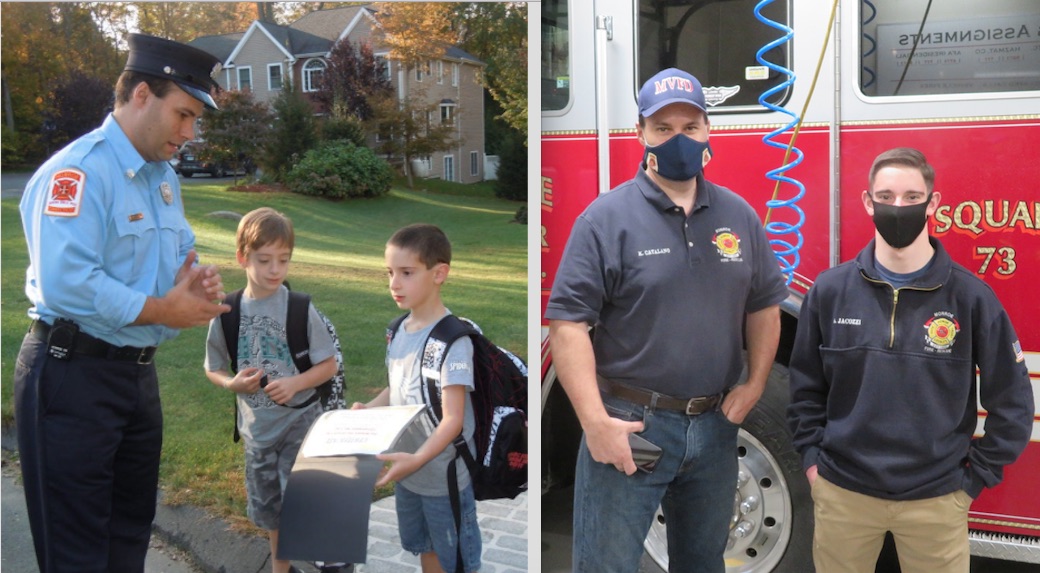 MONROE, CT — Twin brothers Adam Jacozzi and Anthony Jr. were seven-years-old when they stood at the end of their driveway on Sweetbriar Lane one fall morning in 2011, waiting for a fire engine to arrive and take them and their friend Kenny Schneider to school.

The ride aboard the Quint 200 was a raffle prize the Jacozzi family won at the Monroe Volunteer Fire Department’s open house.

“I want to be a firefighter,” Adam said during an interview for a story on Monroe Patch, before the truck arrived.

On Monday evening, he stood inside a bay of the firehouse on Shelton Road with fellow juniors, brother and sister, George and Kendyl Roelofsen, and Deputy Fire Chief Kevin Catalano, the firefighter who drove the kids to school a decade ago.

Jacozzi, who is studying to be an emergency medical technician, said he wanted to be a firefighter for as long as he can remember.

“I wanted to do something in public service and this gives me the ability to,” he said, adding, “I have family members in the field.”

Jacozzi’s brother, Keith Torreso is a police officer in Norwalk and he has a cousin who is a firefighter and paramedic in West Haven.

Firefighting is often a family affair. The Roelofsens’ father, also George, is a firefighter in Killingworth.

“I wanted to do it because he was in it for a while,” George, 17, lieutenant of the juniors, said of his father. “He had all his friends from there. They’re like a second family.”

“I wanted to do it before he did it,” said Kendyl, 14. She said she noticed how her father and brother enjoy serving. “Being an impatient person, I joined as soon as I could — two days after my birthday.”

Catalano said junior firefighters are usually age of 15 to 17, but if a teenager already has family members in a fire department, he said they can be as young as 14.

Jacozzi said he likes the camaraderie.

“I like having a second family,” he said. “We have a whole bigger group of friends here, people I consider family.”

Both Jacozzi and George want to become career firefighters one day.

Catalano said some of Monroe’s juniors have gone on to became career firefighters at paid departments in Westport and Greenwich, and one joined the FDNY. 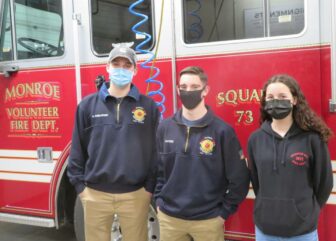 On Sunday afternoon, a Volvo SE and a BMW 528xi were involved in a two-vehicle-crash at the intersection of Elm Street and Monroe Turnpike. Catalano said junior firefighters took part in the emergency response, sweeping up debris and cleaning any fuel spills, while helping to reopen the roads to traffic.

Town firefighters also responded to two barn fires recently. George was on one of those calls, cleaning hoses. Catalano said the work of the juniors allows the department to put equipment back in service faster after a call.

“Juniors get firefighters’ gear,” he said. “They wear blue helmets, so we can identify them. They train with us. All the equipment on the truck, it’s their job to know where everything is.”

The junior firefighters are minors, so they are kept out of harm’s way. They cannot fight fires, use power equipment or climb ladders. But Catalano said they get as much hands on experience as possible.

When firefighters need equipment during a call, the juniors know exactly where to get it and make sure they have it quickly. Catalano said they also help to set things up. For instance, at night they may set up lighting.

Every Sunday, the juniors come to the firehouse for training at 7 a.m. Last weekend, a session was held at the Fairfield Regional Fire School.

“We try to keep the station clean,” George said. “We’re always cleaning. It’s something that you take pride in.”

“It has not only given me a bigger friend group, it gave me a chance to get my foot in the door at other fire departments,” Jacozzi said of being a junior.

“It gets them involved in the community at a young age,” Catalano said of being a junior firefighter. “It teaches them skills, purpose and structure. We get to see them grow and mature.”

Most junior firefighters join through the Masuk Fire Brigade, led by David York, a long time firefighter and former chief of the Stevenson Volunteer Fire Department in town.

“We can always use new members, but we definitely find keeping the junior corps fresh is our best source for new members,” he said. “If we can keep six to 10 juniors at any one time, that’s probably a good number for us.”

Before Catalano worked his way up to deputy chief of the Monroe fire company, he joined Long Hill Fire Co. No. 1 in Trumbull as a junior firefighter at age 16. He recalls taking steps to become a member a few days before his 16th birthday, so he could join without delay.

“Like Kendyl, I started as soon as I could,” he said, “and never stopped.”

2 thoughts on “Before he was a junior firefighter, Jacozzi won a fire engine ride at age 7”