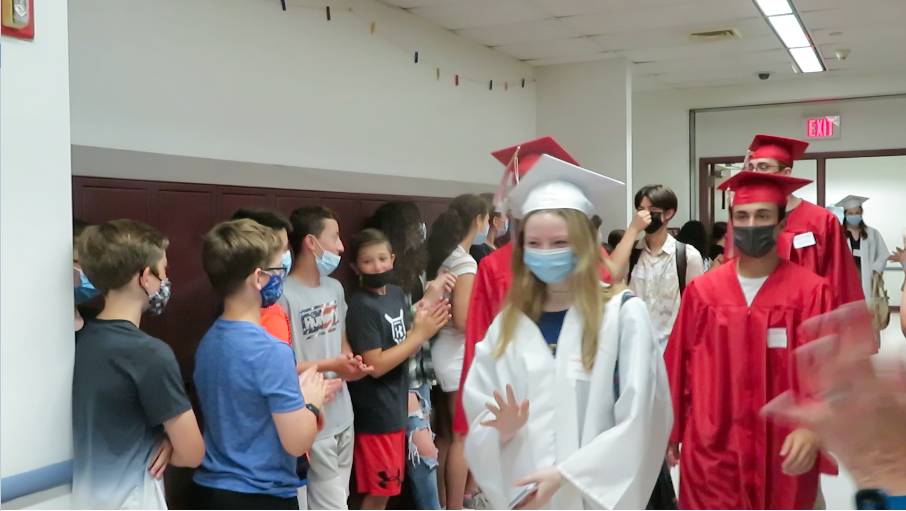 MONROE, CT — Masuk High School’s band played, while leading the Parade of Graduates Monday morning. Seniors, wearing red and white caps and gowns, visited the hallways where, for many of them, it all began: Jockey Hollow Middle School and Monroe, Stepney and Fawn Hollow elementary schools.

The parade went through the STEM Academy wing of Masuk, before buses took the Class of 2021 to the other school destinations. At every stop, children clapped and cheered for the graduating seniors, often seeing an older sibling among them.

Masuk Principal Steve Swensen brought the idea for the Parade of Graduates here from his former school at Windsor Locks. He said 70 to 75 percent of Masuk’s senior class went through the school system in Monroe, making for memorable visits to their old schools.

Swensen said the Parade of Graduates also gives the younger students something to aspire to.

Superintendent of Schools Joseph Kobza sat on a wall outside Masuk’s front entrance before the parade got underway. “I think this is the start of a really great tradition,” he said. “I know the kids are excited at the elementary schools.”

Kobza said the same goes for the teachers and administrators he spoke to, including retired Monroe Elementary School principal, Debra Kovachi, who went back to her school Monday morning to see many of her former students again.

After the parade, Kobza said, “you know it’s a success when you see kids crying tears of joy.”

‘Every student is my kid forever’

At Jockey Hollow, sixth graders and their teachers stood against the walls of the hallway upstairs, anxiously awaiting the arrival of Masuk’s senior class.

“It’s great. It’s fantastic,” said Evelyn Ramos, a paraprofessional of 28 years. “I would love to see them. It makes me feel older.” 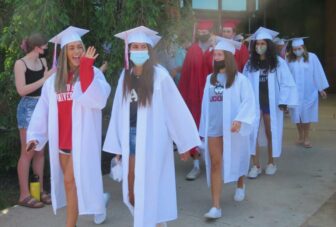 The Class of 2021 marches out of Masuk’s STEM Academy doorway, heading for the bus and the start of their tour through the lower schools.

Gretchen Conte, a sixth-grade teacher, said the Parade of Graduates gives the younger children a rare opportunity to see the older kids, other than attending a game or another high school event.

“This gives us an opportunity to see them and the end results of all the hard work they have done from kindergarten to their senior year,” Conte said, “just the chance to acknowledge them. To show we care about them and to see their faces, because every student is my kid forever.”

Moments later, a tone went over the PA system and a woman’s voice announced, “the Masuk graduates are arriving.”

The school band could be heard, before the parade of students emerged from the stairwell. Children clapped and cheered and some smiling seniors exchanged high fives and greetings with their former teachers. 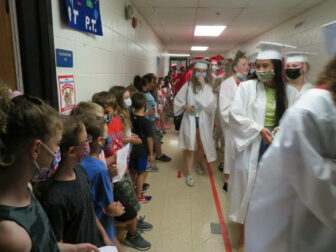 Later that morning, Jill Silvestro, a second grade teacher at Fawn Hollow Elementary School, had her class prepared for the seniors’ arrival.

“It’s so nice to see how much they’ve grown over the years, and how successful they are,” Silvestro said. “I can’t wait to see them.”

When the band was one member short, Elizabeth Daly, an administrative assistant at Fawn Hollow, who was in a high school band growing up, played the bass in the parade with her daughter, Erin, a Masuk student who plays the clarinet.

Fawn Hollow Principal Leigh Ances said, “it’s a special day, certainly for the graduates, but it’s also very special for the younger children because they get to see what’s ahead for them. I feel like one of the things that makes Monroe special is its school community.” 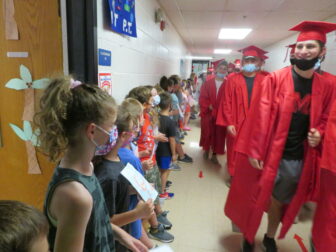 Masuk seniors gathered in their school gymnasium for a commencement rehearsal early Monday morning, moments before the Parade of Graduates got underway. Sisters, Emily and Abigail Bowen, who attended Stepney and Jockey Hollow growing up, were among them.

The Bowens were not only going back to their old schools, they were going to see their younger brother and sister at Stepney.

“It’s exciting and it’s definitely weird that our younger siblings are there right now,” said Emily.

“I have a little cousin in the fifth grade at Stepney, Bryson,” Grey Simons said. “I went to Stepney. There are a lot of mixed feelings.”

Simons said she thinks the Parade of Graduates is a great idea and wishes Masuk started the tradition sooner. She looked forward to seeing her old teachers and catching up.

Ariana Abordo has a brother who will be a fifth grader at Stepney next year. “I like it,” Abordo said of Masuk having its first Parade Graduates. “At my old school, they did it every year.”

Abordo went to Chaparral High School in Temecula, Calif., before her family moved to Monroe.

Alexander Patrick grew up in Monroe and went to Stepney. He had mixed emotions about going back to his old school. “Some things I want to suppress,” he said. “I want to remember the good times.”

Joan Suarez moved to Monroe from Bridgeport as a sophomore. He was among the seniors who did not grow up in town and could decide which elementary school to visit.

“I’m going to Stepney, because my two siblings go there,” he said of his sisters who are in kindergarten and first grade. “They can’t wait to see me. They talk about it a lot.”

Colin Lange went to Fawn Hollow and has a brother, Quinn, who is in the first grade there. “I like that we’re going back to our middle and elementary schools — going back to our stomping grounds before we graduate,” he said of the parade, “so it will be nice.”

Daniel Verrastro planned to go back to Fawn Hollow. “I think this is amazing,” he said. “This is a brand new tradition and I think it’s fantastic to be honest. I have a brother in the fourth grade. He cannot wait. He knows my friends too. It’s lots of familiar faces for him.”

Josie Maguire started her Monroe school career as a Fawn Hollow Elementary School first grader. Her brother, Owen, is in the fifth grade there now. “It’s going to be weird going back to the old place. I think it’s really cool and my brother, today he said, ‘I’m going to wear my sister’s college apparel.'”

Maguire will attend the College of Charleston in South Carolina in the fall.

Hannah Sawyer went to Stepney, dating all the way back to her kindergarten days. She has a sister, Kenny, in the fourth grade there.

“She’s really excited,” Sawyer said, adding of the Parade of Graduates, “I think it’s super cool. I think they should continue the tradition. I haven’t seen my teachers in a while. It will be great to see them before we go off.”

Neha Samuel started high school at Masuk when her family moved to town. She chose to go to Stepney, where her sister, Natasha, a second grader, goes to school. “I don’t think she knows,” Samuel said of Natasha’s visit from her big sister. “It’s going to be a surprise.”

See the full parade contingent, and all the graduates’ faces, in this video: