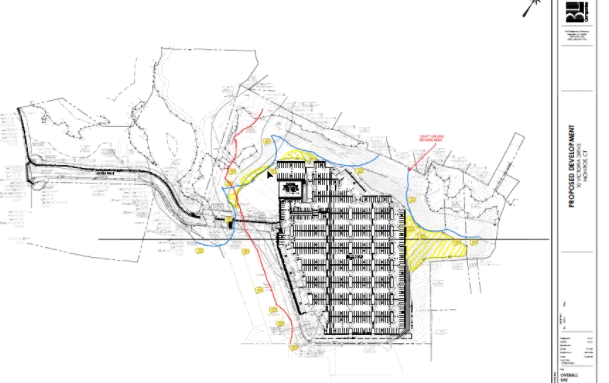 Yellow areas of this map shows where the unauthorized cutting of trees took place at 10 Victoria Drive.

MONROE, CT — An attorney for a developer who wants to build a commercial vehicle facility with a fleet of delivery vans at 10 Victoria Drive assured the Planning and Zoning Commission that the town will receive taxes for the Mercedes-Benz Sprinter vans.

During a hearing on Feb. 18, Leon Ambrosey, a commissioner, asked Attorney John Knuff if the town would get a list of all of the vehicles that will be stored on the property.

Knuff said his client can work with the town’s assessor. “We will make every effort to ensure that the declarations are filed, so the town will receive the taxes that it’s due,” he said.

While not all vehicles will be registered in Monroe, Knuff said there are ways around that to make sure town receives the motor vehicle taxes, adding the facility would generate substantial commercial tax revenue for Monroe.

There are two applications before the commission, one is a text amendment to allow the use in an I-3 zone and the other is a special exception permit application for the facility.

Because notices have not gone out to all of the neighboring property owners in time for the meeting, only the text amendment application was heard last week. That hearing was kept open.

The hearing for a special exception permit application for the construction of a commercial vehicle facility with a 10,000-square-foot office building and a parking lot for 400 vehicles will begin on March 4.

Knuff apologized for the delay and said the applicant is available to talk to anyone, including the neighbors, outside the context of the hearing.

The changing world of retail

Planning and Zoning Commissioners heard a presentation for a text amendment that would pave the way for a fleet of delivery vans to operate at 10 Victoria Drive. The site was approved for a Walmart years ago, before the retail chain decided not to move forward.

“That change perfectly summarizes how dramatically the world has changed, going from a true bricks and mortar retail store to a use that facilitates the delivery of goods and supplies that are purchased online,” Knuff told the commission at its meeting on Feb. 18.

At a prior meeting with the Planning and Zoning Commission’s Regulations Subcommittee in August, Knuff declined to name the business that wants the commercial vehicle facility on the Monroe property. But he did say it would start with 400 vans and do deliveries for the company’s new facility in Trumbull. Amazon has a new distribution center in Trumbull.

Knuff said a text amendment allowing a commercial vehicle facility in an I-3 zone presents an opportunity for both the town and property owners to develop parcels that previously had been used for big box stores or other uses for which there are no longer markets.

He noted how a commercial vehicle facility needs a lot of land and the I-3 has a minimum lot size of 10 acres.

There is no sewer line on Main Street, the main thoroughfare to Victoria Drive, and Knuff said the facility would not require a large septic system.

Other potential uses would have a higher sewer demand, such as corporate offices and medical offices — and, aside from medical, there is little demand for office or industrial uses, according to Knuff. A multi-family residential use is not allowed in the zone, he added.

Knuff said the text amendment proposal is consistent with existing town regulations in the industrial district with the same landscaping and lighting requirements.

Among two changes, it would allow a commercial facility to abut a residential zone and require a 100 foot minimum buffer, with no waivers or exceptions of any kind.

Currently, commercial vehicle facilities are only allowed in an I-2 zone. Though it allows fueling and maintenance on site, Knuff said his client is not proposing to do either.

He said this would spark the local economy, by turning the delivery drivers into customers for gas stations, mechanics, coffee shops, delis and other establishments.

“It also minimizes intrusions on any neighboring properties,” Knuff said.

Though Knuff declined to into specifics on the operation of the facility until the March 4 hearing, he said there would not be significant impacts on traffic, because drivers will avoid going out during rush hour. He said the business does not want its van drivers sitting amid slowed and stalled traffic.

The text amendment is consistent with Monroe’s Plan of Conservation and Development’s goal of diversifying the town’s tax commercial base and alleviating the burden on residential property owners, according to Knuff.

He said it is also consistent with the Comprehensive Plan, which consists of the town’s zoning map and regulations.

“I view it as a very minor modification of your existing regulations,” Knuff said.

Robert Westlund, a commissioner, asked Knuff if they plan on using all 400 parking spaces right away. The attorney said they will start with a couple hundred and work their way up.

Westlund expressed concerns over fuel leaks into the Pequonnock River that is nearby and wanted to make sure fueling will be offsite. Knuff reiterated that there would be no fueling or maintenance there, adding his client has an administrative approval from wetlands.

Knuff also said the development window is a bit smaller than what Walmart was approved for.

Nicole Lupo, a commissioner, asked where drivers’ personal vehicles will be parked. Knuff said it is “pretty much a one-for-one” with drivers parking their cars and leaving in a van.

Schultz also said the POCD recommends the creation of zoning initiatives, which will promote economic development around the Victorinox Swiss Army facility and the Corporate Drive Industrial parks, the only locations with I-3 districts.

After the hearings and reviews, he said the commission will have to determine whether or not the text amendment will significantly impact residential properties and traffic on roads, and whether it is consistent with the POCD.

The application will also be reviewed by the Naugatuck Valley Council of Governments and MetroCOG.

2 thoughts on “Attorney: Monroe to receive all tax revenue for fleet of delivery vans”