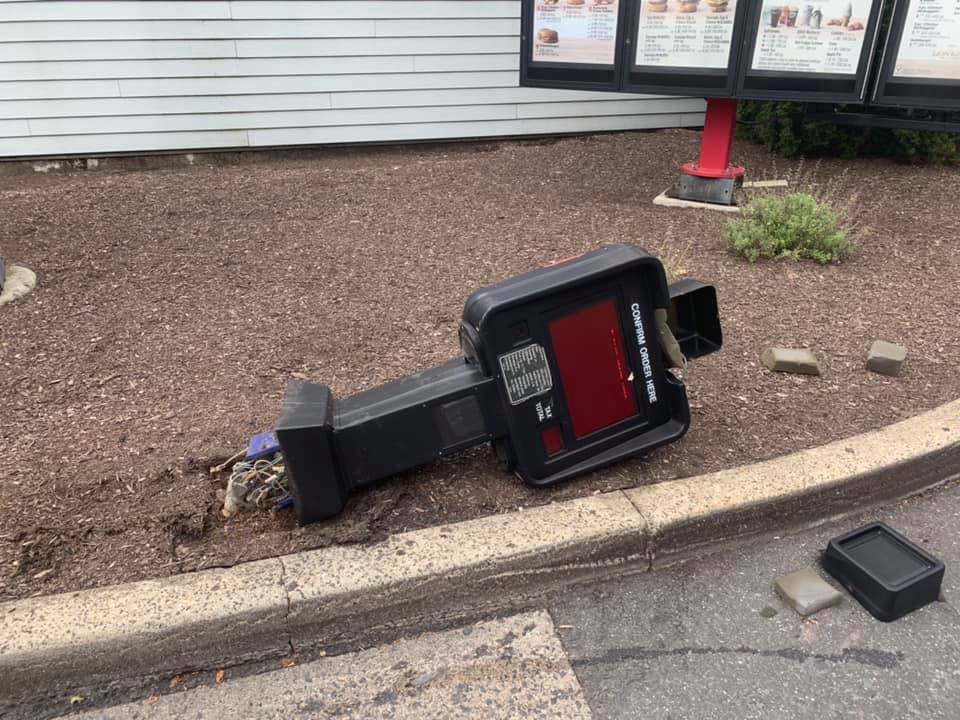 An employee shared this photo of the damaged sign and speakers from a crash at the McDonald's drive-thru on the Monroe CT Residents Facebook page.

A local man was arrested on a warrant, charging him with evading responsibility Friday, for allegedly crashing into and severely damaging two intercom systems outside McDonald’s on Aug. 4.

An employee of the 390 Monroe Turnpike restaurant told officers a green pickup truck with a trailer, driven by a white male with blonde hair down to his ears and glasses, hit the intercoms and took off.

Witness statements and a police investigation led to officers applying for a warrant for the arrest of the 18-year-old driver, who was charged and released on $2,500 bond for an Aug. 27 court date.

Police said he told officers it was an accident when his boat trailer hit the intercoms.

That ‘burglar’ was a bear 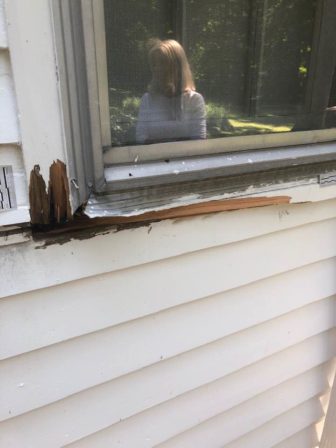 A window was damaged by a bear on Willenbarb Road. Contributed

A woman reported an attempted break in at her home on Willenbarb Road Monday night, after noticing damage to her bathroom window.

Police said the base of the window was ripped off, bird feeders were disturbed and flower beds were dug up.

“We believe it was a bear,” said Lt. Stephen Corrone.

Animal Control Officer Ed Risko wrote a post about the incident on his Ed Acu Facebook page, saying  the bear may have tore into the window because it smelled ants or termites.

In reference to a bird feeding house outside, Risko reminded residents to stop leaving food out, which has the effect of feeding bears and encouraging the animals to frequent people’s yards.

Risko said the bear was heading back toward Summit, Guinea and Hattertown roads.

A man allegedly shoplifted items from the Rite Aid on Main Street Sunday night, before fleeing the scene on his scooter, only to be stopped by police while heading toward Newtown.

Collins Michael Verstegen, 55, of Newtown, was charged with criminal mischief and sixth-degree larceny, held on $295 bond and brought to court Monday.

At around 6:30 p.m. on Sunday, a manager of Rite Aid reported seeing someone spend hours at the store, before putting items under his shirt and fleeing the scene.

Police said Verstegen stole $278 worth of merchandise, including a Windows 10 Tablet, a baseball cap, a hooded sweatshirt, a small pack of earrings, a navy blue belt, an MSA 30X Sound Amplifier and a Bluetooth headphone.

A 32-year-old Pepper Street man was arrested on a warrant charging him with a weapons violation on Aug. 15.

Zachary P. Schultz was charged with second-degree reckless endangerment, improper storage of a loaded firearm and possession of a controlled substance. Held was held on $10,000 bond for an Aug. 23 court date.

On July 16, officers responded to a complaint around 9:30 p.m. about a suspicious vehicle parked on Boulder Ridge Road for about 40 minutes without the engine running, but with the headlights on.

When the officers found the vehicle, they tried to contact the owner from the registration information to no avail, according to the report.

Police said the doors were unlocked and the keys were in the ignition. An officer opened the door to retrieve the key and saw, in plain view, a firearm in the interior compartment of the driver’s side door, according to police.

The gun was fully loaded with a round in the chamber and with a full magazine, police said, adding a subsequent search led to officers finding the owner’s wallet with Schultz’s identification inside and two pill bottles with no prescription labels.

The bottles contained one multiple 20 milligram amphetamine and dextro-amphetamine, both are controlled substances that must be in a properly marked container and held by the right person, police said, adding there was no proof that Schultz had a prescription.

Police said Schultz was not home when officers went there that night and he did not return phone calls after that, before officers applied for the warrant.

On Monday, a Hidden Knolls woman told police she learned someone opened a credit card in her name in June, adding she ended up getting the card, which was never activated.

Her credit line was canceled with no loss of money and she was advised to contact the credit bureaus for credit monitoring and fraud protection, according to police.