MONROE, CT — A man told police he was walking his dog along the Rail Trail Monday afternoon, when he let his pet defecate on the grassy side of the trail. Another man confronted him about leaving it there, sparking a verbal altercation.

The man allegedly threatened to punch the dog walker and to call police.

When the dog walker continued to walk along the trail, he noticed the stranger was no longer behind him, police said. This worried him, because the other man had parked in front of him in the parking lot on Cutlers Farm Road, police said.

Police said the dog walker returned to the parking lot to find the left passenger side door of his Chevy Silverado had been keyed. Police do not know who keyed the truck.

One hospitalized after Route 110 crash 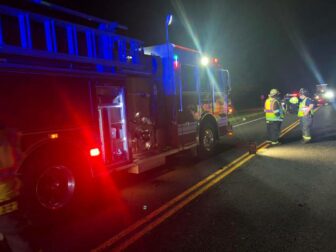 Firefighters respond to the scene of the one-car-crash on Route 110 Monday night. The photo is from the Monroe Volunteer Fire Department’s Facebook page.

A passenger was hospitalized after firefighters extricated her from a Hyundai Sonata after the driver crashed into a utility pole on Route 110 late Monday night.

A police officer on patrol was parked at the entrance to Whitney Farms Golf Course when he heard a loud crash on Route 110 (Shelton Road) around 10:39 p.m., police said.

When the officer drove to investigate, he found a tire and numerous car parts strewn on the roadway near the intersection of Richmond Drive. A Hyundai Sonata had crashed into the pole and a male driver and a juvenile female passenger were standing by the wreckage, according to the report.

A woman was trapped inside the vehicle, so town firefighters extricated her from it and Monroe Emergency Medical Service personnel evaluated everyone at the scene. The Stratford woman was taken to a hospital.

Police said the driver, a 23-year-old Bridgeport man, told officers they were going home from the Shelton Carnival before the accident. Police are still investigating the cause of the crash.

Police responded to several complaints of vehicles being entered this week.

On Tuesday, a Sheep Meadow Drive man told officers someone entered his vehicle when it was parked in his driveway, sometime on Monday, and stole a leather bag containing a laptop.

On Tuesday night, a Gay Bower Road man told police his home security camera showed someone entering his vehicle, though he does not believe anything was taken. While investigating the incident, a neighbor’s package was found in the man’s yard, police said.

In the same area, a Cedar Lane resident told police he saw a man in a gray Hoodie get out of a gray Honda and try to enter a vehicle outside his home, before finding it was locked.

The suspect got back into the Honda and drove off, police said.