MONROE, CT — Students taking advantage of the free school lunch program can help Monroe public schools clear a $146,000 deficit from its plate, by increasing the amount of federal reimbursement for every meal they eat.

“Families will be doing us a huge service if they have their kids participate in the school lunch program,” Superintendent of Schools Joseph Kobza said. “If we can start averaging somewhere around 1,800 lunches a day, we can erase that deficit by the end of the school year.”

Reimbursements from a federal grant are $1.89 for breakfasts and $3.51 for lunches in the National School Lunch Program. Though Masuk High School is not enrolled in the program, Kobza said its students are now eligible for the free lunch program.

Other than equipment and maintenance, Monroe public schools does not budget for school lunches, because its vendor, Sodexo, usually breaks even.

But the COVID-19 pandemic made the district shift from hybrid learning to remote learning this year, leading to significant drops in cafeteria sales and participation in the national free school lunch program, which receives the federal reimbursement.

Kobza said Sodexo still has overhead costs for packaging, materials, food and labor, creating the deficit with costs the school district is responsible for.

Kobza and other administrators met with representatives of Sodexo on Friday afternoon. “We’re working closely with Sodexo to try to find creative ways to increase participation as the year moves forward,” he said.

The superintendent updated the Board of Education about the situation at its meeting on Monday.

The program currently is running at a $146,000 deficit, but Kobza said Alan Dean, district manager of Sodexo Education School Services, believes $14,000 in COVID-related expenses could be addressed through the Coronavirus Aid, Relief, and Economic Security (CARES) Act.

“He’s hoping to save us about $100,000 in fees for the year,” he said. “We’ve been talking with them on different mitigation strategies. The biggest hurdle we’re facing right now is participation in the lunch program.”

David Ferris, a board member, said he has been getting feedback from students and staff about the quality of hot lunches, adding he heard lunches are good at Masuk, but not at other schools.

“I don’t want to see the district have liability if people aren’t buying because of the quality,” Ferris said. “Is there a good way to survey students in school to see what the factors are? I don’t want to be held liable if there is a quality issue.” 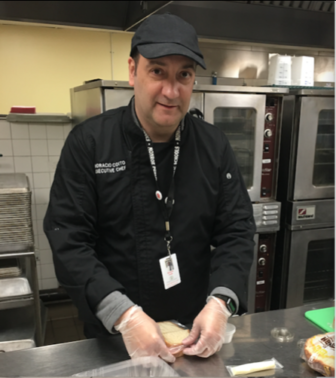 Dean called into the Board of Education meeting, which was held in the Masuk media center and broadcast live on YouTube.

He said Sodexo is addressing the deficit in two ways, reducing daily expenses as best it can and mitigating contractual costs and fees.

Dean said there were layoffs and general manager, Horacio Coito, and one hourly employee are the only ones left. “We are shrinking, really to bare bones,” he said.

“Food cost is running only 20 percent of what we were doing last year at this time,” Dean said of cost savings he and Coito found.

Dean is working to reduce the contractual costs and fees to the district.

“We’re going to do everything in our power to bring the financial exposure to the least possible amount that we can, given the world that we’re in,” he said. “Nobody asked for this, but we’re all in it together and we’re all figuring it out as we go and we certainly don’t know what the rest of the year will bring.”

Dean said everyone will work together to get through this difficult year in one piece.

When Kobza was principal of Masuk, he said Coito always did a good job of putting together surveys to find what students favorite meals and a la carte items were.

“Is there a similar type of survey to make sure we’re meeting the students’ needs and wishes and is there a way to do that at the younger grades?” Kobza asked.

Dean said Coito did one at the high school just before the schools closed in favor of distance learning. When students are back in the buildings, he said surveys can be done for the middle and the elementary schools.

He said the main problem this year is during hybrid learning, buildings are only attended by about 50 percent of students a day, leading to less traffic at the cafeteria.

“A lot of those add-on sales aren’t there, because kids don’t have the ability to move throughout the school,” Dean said.

At Jockey Hollow Middle School, Dean said students eating at the library limits participation and snack sales. Participation in the lunch program is also down at the elementary schools with no snack sales, he added.

“Our sales are running about 35 percent of where they were last year at this time,” Dean said.

He said Sodexo’s starting point with kids and operating days is about half of its business in a normal year. Dean expects Monroe’s students to be in-and-out of the schools in the coming months, because of the pandemic.

“That’s where the opportunity is to garner more meal counts for distance learners,” he said. “It’s free and we really need to get the community to come down and take advantage of those meals. Certainly, in a community like Monroe, there are very few opportunities to have free meals for everybody.”

If more families take advantage of it, Dean said the district and Sodexo can mitigate some of the financial exposure. He said one thing to look into is whether there are more convenient times for lunch pickups to increase participation.

“We really want to encourage everybody to participate in the lunch program,” Kobza emphasized on Friday. “People will be doing the town a huge service.”