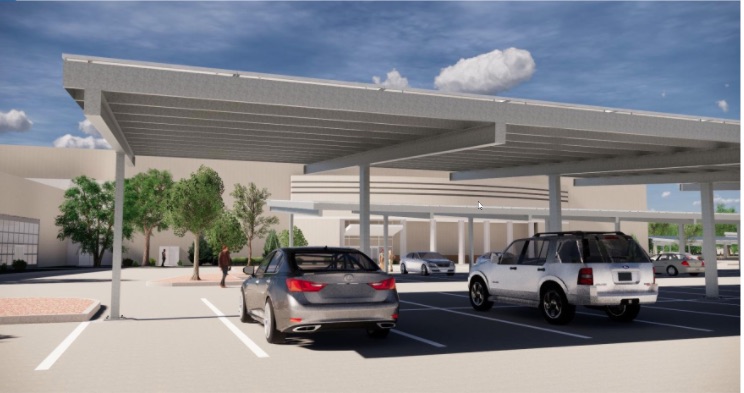 US Green Technologies showed the Planning and Zoning Commission this computer rendering as an example of what a typical car port looks like.

MONROE, CT — Aquarion Water Company plans to expand its parking lot at 200 Monroe Turnpike with 12 new spaces, in a project featuring a solar panel roof for its two-story-building and solar panels on a carport.

The Inland Wetlands Commission unanimously approved the expansion of the parking lot, landscaping and lighting Wednesday night, and the water company received an agent approval for construction of the solar carport, which will cover 23 existing parking spaces.

Last week, the Planning and Zoning Commission held a hearing on the site plan, before tabling it to its Feb. 4 meeting. Mark McGinley, of US Green Technologies, Inc., in Madison, presented the plan.

“We’re all doing what we can for the environment these days and this is gonna offset close to 70 percent of the energy presently being used by this facility,” McGinley said. “It’s gonna produce many kilowatt hours of clean renewable energy. Aquarion Water Company is very conscious of the environment, as you could well imagine, and we believe it will be a positive project for the town of Monroe.”

The building, known as 200 Connecticut, is on a property surrounded by wetlands. It is in a limited office retail (LOR) district and is close to the Trumbull town line. The proposal includes landscaping, stormwater management and lighting improvements.

Last Thursday, Andrew White, a professional engineer for Tighe & Bond, 1000 Bridgeport Ave. in Shelton, made a presentation on the landscaping and drainage plan to the Planning and Zoning Commission.

White said a 12-space parking lot would be constructed along the northwest side of the front entrance with 11 regular spaces and one handicapped space. A new sidewalk is proposed across the frontage of the property.

The plan includes landscaping in front of the building and a rain garden in the wetlands. “Root systems of these plants reduce the amount of runoff from the site,” White said.

Two 14-foot-high light poles are proposed, which is under the 20 foot maximum in the LOR zone, according to White.

He said soil erosion and sedimentation control will be provided.

McGinley said solar arrays would be installed on the rooftop of the building and on a carport that would cover 23 parking spaces in front of the building.

“The majority of the modules will be mounted in racks in a landscape position with five degrees of tilt,” he said, adding the racks used are ballasted and engineered for wind and snow conditions.

The roof mounted system would account for about 60 percent of the energy production for this project and the carport would provide around 40 percent, according to McGinley.

“The carport will be in the front, south part of the parking lot, almost directly out of the front door, covering 23 spaces,” McGinley said. “It will be seven columns going across the existing island between the parking spaces.”

He said the clearance on the low edge of the carport will be 14 feet high, allowing trucks to pass by.

“It’s a cantilevered system, so there are no corner posts, which makes it easy for snow removal and plowing,” McGinley said.

He said the carport roof is not watertight, so spacing between the modules will allow rain to pass through and drain on the property as it always has, using the existing storm drains.

Domenic J. Paniccia, a commission alternate, expressed concern over how the structure would handle wind. McGinley said all of US Green Technologies’ projects are constructed to meet local and state requirements for both wind and snow load.

Robert Westlund, a commissioner, asked if the plan includes any bollards in front of these parking spaces. McGinley said bollards are not needed.

Town Planner Rick Schultz said the Architectural Review Board had asked if a conduit for electric vehicle charging is part of the plan and US Green Technologies said it is.