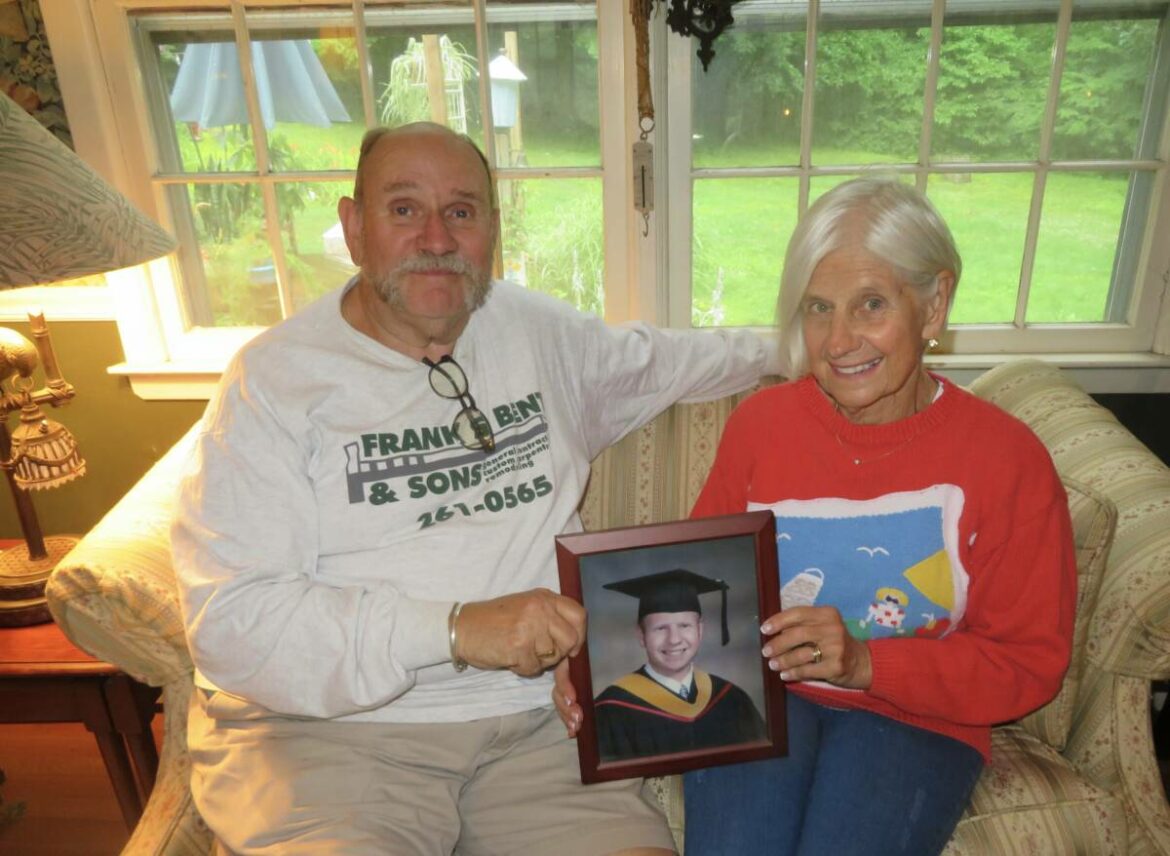 The memory of Frank and Johanne Bent's son, Joshua, is near and dear to their hearts. The couple holds his college graduation photo in their living room Wednesday.

MONROE, CT — Michael Slama experienced illness and surgical procedures from heart disease for most of his life and by 2007, his battle appeared to be all but over. In the hospital, he celebrated his wedding anniversary with his wife on a day in which he was given his last rights.

“He was expecting to die,” said Frank Bent, of Monroe. “All of a sudden doctors came in and said, ‘we have a match. We have a heart.”

Slama received a life-saving heart transplant from Bent’s son Joshua, 27, who died in a car crash in Massachusetts on Memorial Day weekend. 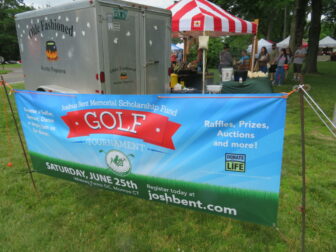 The 14th annual tournament is scheduled to be held this Saturday and proceeds benefit Masuk High School students pursuing careers in architecture. The fund also provides financial aid for students in need at the Wentworth Institute of Technology — Joshua’s Alma mater.

The golf tournament has raised well over $350,000 over the years, benefitting graduating seniors at Masuk, as well as students from Stratford, Trumbull and Fairfield, according to Bent.

To register for the golf tournament, visit JoshBent.com, fill out the paperwork and pay upon arrival Saturday morning. The $175 donation ($700 for a foursome) includes golfing, golf carts, fees, refreshments and snacks throughout the afternoon, lunch and dinner.

The event will also feature raffles for gift baskets and silent auctions. On Wednesday afternoon, two rooms in the Bents’ home were filled with donated items.

“We have Mike Riccio Sports memorabilia. We got it all,” Bent said. “Come to Whitney Farms at noon. We’ll take you on as a walk-on.”

Frank and Johanne Bent had two sons, Joshua and Matthew. Joshua graduated from Masuk in 1998 and went on to study architecture at the Wentworth Institute of Technology.

Bent said Joshua excelled at everything he did, while making the honor roll in high school and the dean’s list in college.

While going to college, Joshua worked part-time at Franklin Covey Office Supplies. One day he taught a customer how to use Palm Pilots he bought for his company, Burt Hill Riddleman Architects.

When Joshua told the man he was pursuing a degree in architecture, the customer offered him an internship.

Bent said his son worked at the firm for six months, before doing a second internship at The Architectural Team, Inc., which had younger architects and a more casual dress code.

“He loved it,” Bent said. “He had a key, so he could go there and do architectural drawings while going to school. When he graduated Sunday, he had a full-time job on Monday.”

Bent said The Architectural Team does not normally hire interns, but made an exception when it came to Joshua. 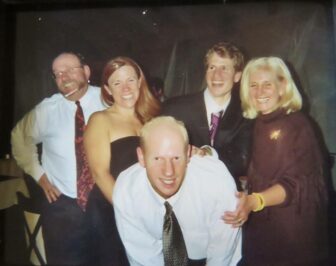 The late Joshua Bent is leaning forward In this old family photo. Behind him, from left, is his father Frank, sister-in-law Nicole, brother Matthew, and mother Johanne.

Bent remembers his son as “happy-go-lucky” with a great sense of humor, and as someone who loved making others happy.

“That was his goal, helping people,” Bent said. “He enjoyed working with people at work and school. He would listen to their problems and help them out. He was a fixer. He didn’t say, ‘this is what you should do,’ they would come to the solution together.”

Bent said he and his wife find it gratifying that Joshua chose to become an organ donor, and that his decision has literally saved lives.

“We’re so grateful for what he did and who he was,” Bent said.

Johanne said the annual golf tournament has become a reunion for supporters, who enjoy eating dinner together and chatting with their friends, at an event that includes the scholarship recipients and their families.

“It’s a wonderful memory of Josh,” Johanne said of the fundraiser. “That makes me happy. He was a partying kind of guy, and sometimes I feel like he’s on my shoulder partying with me.”

Bent said it has given him the opportunity to hear more stories about his son.

Matthew and his wife, Nicole, have two children, Atticus, 12, and Lyle, 9, who are too young to have gotten to know their Uncle Josh. Joanne said their grandchildren point at their uncle’s photos and ask about him when they visit.

When their granddaughter, Lyle, was five-years-old she had a dream about her uncle. “Josh was giving her everything she wanted,” Johanne said of the dream, “and she never met him.”