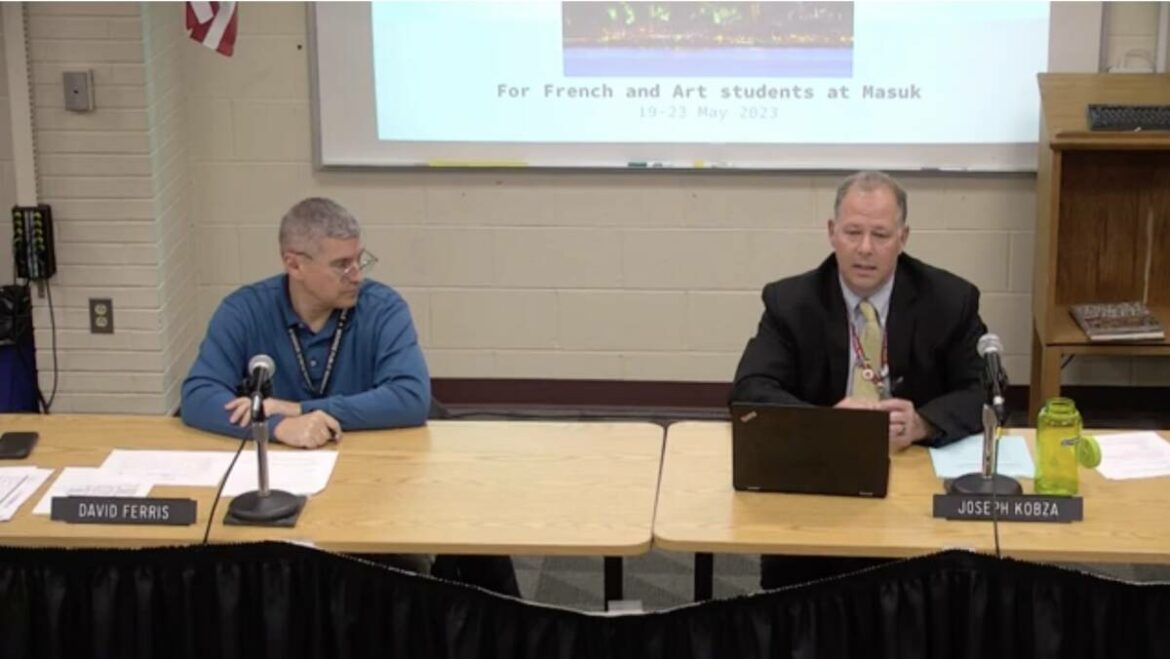 Superintendent of Schools Joseph Kobza, right, talks about a shortage in substitute teachers during Monday's Board of Education meeting, as Chairman David Ferris looks on.

MONROE, CT — Principals at Monroe’s public schools are struggling to hire substitutes to cover classes when teachers are out, so the Board of Education unanimously decided to increase the pay for subs at its meeting Monday night.

A daily substitute covers classes for shorter stints, while a permanent substitute is assigned to one building and covers whatever classes the principal assigns them to. Daily substitutes are paid $95 per day and permanent subs earn $105 a day. The rate for both will now be $115 per day, taking effect after the holidays.

Superintendent of Schools Joseph Kobza said administrators spoke to candidates who started doing paperwork to teach in Monroe, or went through the whole process, only to take jobs elsewhere.

“Anecdotally”, the district found it was because other towns pay more, according to Kobza.

“The bigger issue is that we’re not getting substitutes at these rates right now,” he said of the $95 and $105 per day rates. “Other districts around us … Trumbull most recently has upped theirs to $120.”

The superintendent expressed his hope that raising the rate will entice aspiring substitutes who live in Monroe to stay in town.

A nationwide teacher shortage has increased competition among school districts to fully staff their buildings. Nationwide approximately 360,000 fewer people are working in public education than before the pandemic, according to August 2022 data from the Bureau of Labor Statistics of the U.S. Department of Labor.

The national teacher shortage is also making it harder to find substitutes. Kobza estimates two-to-three more substitute teachers are needed at each of the town’s three elementary schools.

During Monday night’s Board of Education meeting it was also revealed that, even when everyone is healthy among Monroe Elementary School’s staff, it still has three openings for positions yet to be filled.

“Principals are running around trying to get everything covered,” Kobza said. “It’s difficult.”

When a class cannot be covered at Masuk High School, Kobza said those students go to the library or cafeteria, “which is not what we want kids to be doing.”

When a substitute cannot be found at Jockey Hollow Middle School or one of the elementary schools, Kobza said educators are pulled from other areas, such as reading staff, taking them away from the work they’re supposed to be doing.

Meeting in the middle

While presenting the problem to the Board of Education, Kobza noted how the district will have to increase its rate for daily subs no matter what, because the minimum wage will rise to $15 per hour.

After reviewing the situation with Finance Director Ronald Bunovsky Jr., Kobza initially decided to ask the school board for an increase to $110 per day.

But Dennis Condon, a board member, noted how much lower it was than neighboring Trumbull, and fellow board member, Dr. Alan Vaglivelo, suggested going to $115.

Condon later made a motion to increase the rate to $115 at the district’s discretion, based on availability, and board member Jeff Fulchino seconded it.

Chairman David Ferris asked Bunovsky if the increase would hurt the district financially. Bunovsky said the district could cover it, adding it could lead to more candidates for openings.

Ferris said it will be good to get positions covered. “We need to be competitive at the very least,” he said.

Chrissy Martinez, a board member, asked Kobza if Monroe’s rate for substitute teachers is the same for certified and non-certified teachers.

“We’ve never differentiated rates,” he replied. “Most don’t, but during our research I did see a few places that did. It was interesting, because I haven’t seen this before. But it’s the same rate.”

Bunovsky said the district will include the new $115 per day rate, while building the budget for next year.