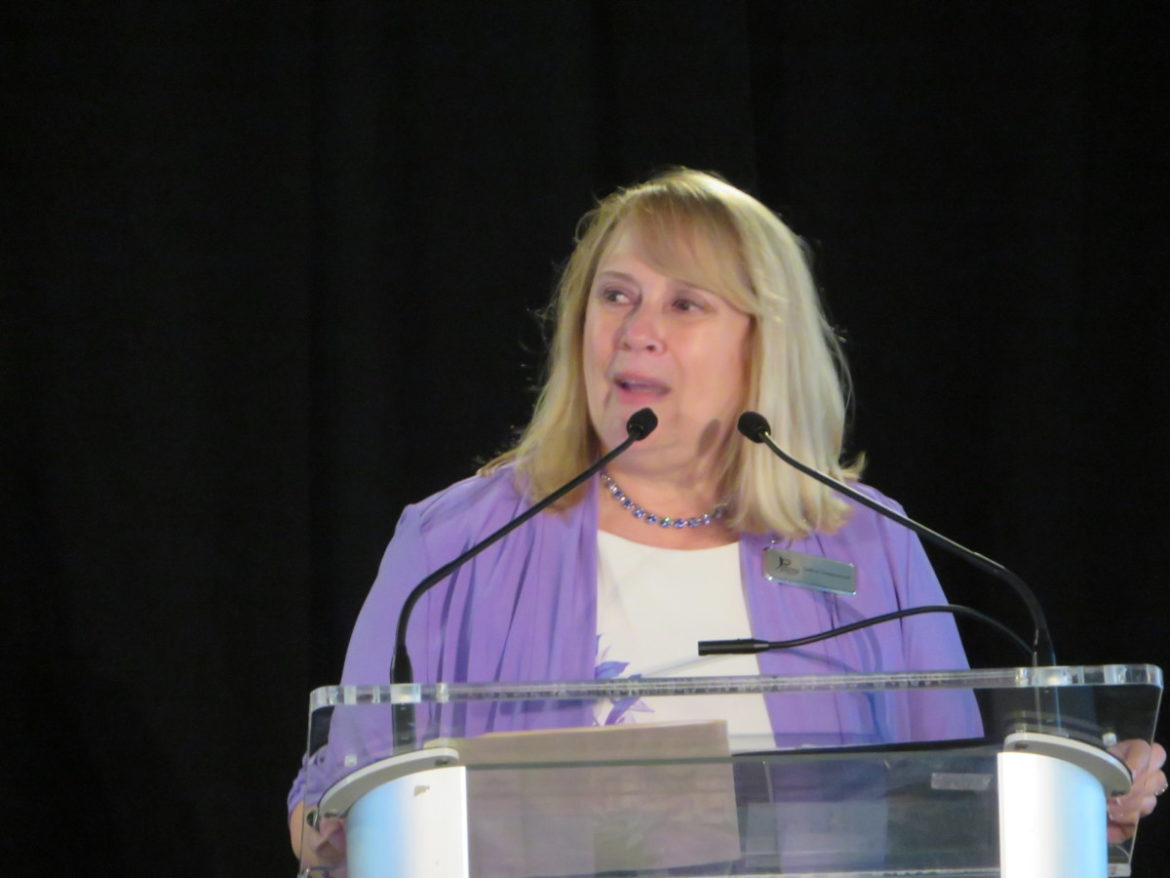 Debra A. Greenwood, president and CEO of the Center for Family Justice, speaks at the annual Speaking of Women luncheon at The Waterview in Monroe Tuesday.

The interview was also displayed on TV monitors for the packed audience, which included local business professionals, politicians, police officers and volunteers. 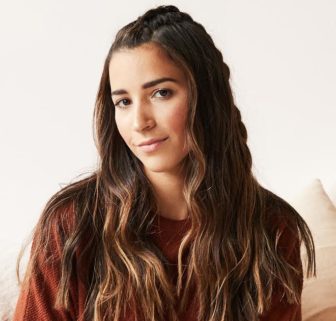 Aly Raisman, an Olympic gold medal winning gymnast, was the keynote speaker at The Speaking of Women luncheon at The Waterview in Monroe Tuesday. Contributed

Raisman was not the keynote speaker for her Olympic achievements. Rather it was for her bravery in speaking out publicly, after being one of the many victims sexually abused by former Olympic team physician Larry Nassar.

“It is so important to support a survivor when they come forward, because if they’re not supported it feels like they’re being abused all over again,” Raisman said.

She said education and open discussions about the problem of sexual, domestic and child abuse is important.

Proceeds from Tuesday’s fundraiser benefit the Center for Family Justice, which provides support and services to all victims and survivors of domestic violence, sexual violence, human trafficking and child abuse. The nonprofit serves the towns of Bridgeport, Easton, Fairfield, Monroe, Stratford and Trumbull.

The center, located at 753 Fairfield Ave. in Bridgeport, also educates the community on how to break the cycle of violence by building relationships, empowering communities and mobilizing bystanders to speak out about abuse and violence.

Greenwood also praised the men and women in law enforcement, who respond to 911 calls for domestic disturbances when emotions run high and weapons are sometimes involved.

Kathy Maiolo, board chair of CFJ, said the organization increased programs for Monroe by 230 percent, as well as providing a 26 percent overall increase in services for clients affected by domestic violence and sexual assault.

“Our clients matter,” she said. “We’re transforming lives and that matters. You’re here today because you know it matters. We want our clients to know they matter. Our clients are always at the forefront of the decisions we make. We won’t stop letting them know that hope starts here.”

Joyce Fenterstock, who has a long history of supporting victims of intimate partner violence and abuse as a volunteer and an advocate, was honored with the 2019 Speaking of Women Distinguished Service Award.

She said “despite the amazing work the center does” the problem still persists. As Domestic Violence Month approaches this October, Fenterstock asked everyone to commit themselves to play an even bigger role in raising awareness.

A video on Camp HOPE was shown. Children who are victims of domestic violence and sexual abuse enjoy summer recreational activities, including hiking, swimming, sailing, jet-skiing, obstacle courses, arts and crafts and evening campfires at Camp Hi-Rock, on a tranquil private lake in the Massachusetts’ Berkshires.

Camp HOPE is run by The Center for Family Justice in partnership with the Coastal Connecticut YMCA.

Ethan, 17, a Fairfield Prep senior, was among the campers featured in the video. He spoke about his experience at the luncheon.

He said victims of abuse often lose their sense of self worth and feel shame and guilt. “Camp HOPE inspired us to be more than we thought we could be,” Ethan said. “Our futures are bright.” 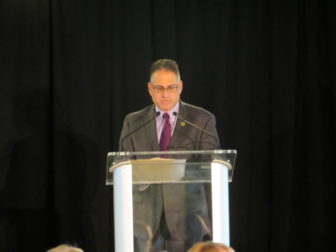 Monroe First Selectman Ken Kellogg was among the men who participated in the Speaking of Women luncheon at The Waterview Tuesday.

“Most offenders are men, but most men aren’t offenders,” MacNamara said. “Women are not going to solve this problem alone. We all have to work together.”

“In the fight against domestic violence and sexual assault, the presence of men matters,” he said, before looking around the dining room and adding, “it’s important that there are men here. We need to be there to be present, supportive and to speak out.” 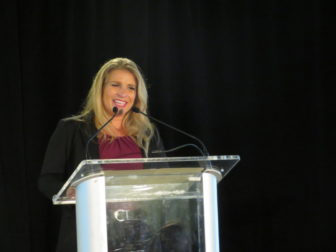 Anna Zap, co-host of “The Anna and Raven Show” on Star 99.9, was master of ceremonies at the Speaking of Women luncheon at The Waterview in Monroe Tuesday.

Raisman called for more education about abuse for everyone who works with children at youth organizations and schools, as well as parents and children.

“You don’t want to scare them, but you want children to understand it,” she said. “Even if you don’t tell mom or dad, it’s important to tell somebody.”

As in the case of Nassar, Raisman said abusers sometimes have many victims, so coming forward and reporting the abuse can help others by putting a stop to it.

“Abusers are very good at making you feel like they love you,” Raisman said. “Just because somebody says they love you, it doesn’t make the bad things they do to you okay.”

Raisman warned against adults trying to get alone time with a child, taking an excessive number of photos of a child and giving gifts, all behaviors that can be red flags.

When the Olympic sex abuse scandal was in the news, Raisman said a lot of people wondered aloud, “why are the athletes just speaking out now?” But she said those people were not listening because some spoke out as early as 1997.

However, in cases where a victim comes forward 20 years later, Raisman asks people to understand how difficult it can be for victims to speak out, adding that person may have told someone in the past only to be shot down.

Unfortunately, Raisman said victim shaming is part of our culture. She used the example of a young woman sexually assaulted on a college campus being judged for wearing a short miniskirt and having too much to drink.

“It’s 100-percent not her fault,” Raisman said. “Women should be able to wear whatever they want anytime of night and not worry about being assaulted. They are not asking for it.”

Of her own abuse, Raisman said some people say, “what do you expect? You were wearing a leotard.”

She said a “family friend and a nice guy” brought up the news of a sexual assault and, without knowing the accused, said, “I know he didn’t do it.”

Raisman asked the friend if he was in the room and when he said no, she said, “so don’t say anything. You’re victim shaming.”

Raisman read an impact statement at Nassar’s sentencing last year, and filed a lawsuit against USA Gymnastics and the USOC claiming both organizations “knew or should have known” about the ongoing abuse.

But even though she has spoken out publicly, Raisman said she is only 25-years-old and it is not easy. She said triggers often bring back the trauma.

Raisman said she meditates, has a good support system and tries not to talk about the abuse every day and to live in the moment. On bad days, when she feels very tired and doesn’t want to leave the house, her therapist encourages Raisman to rest and watch a funny movie.

Raisman said she tries to take care of herself and to be comfortable with where she is in the healing process.

When people tell her stories of their own abuse, Raisman said she listens and tries to be supportive, while encouraging them to get help.

“There’s no maps,” she said. “What works for me, might not work for somebody else.”