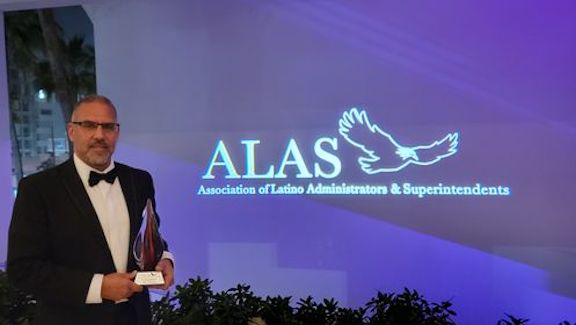 He and his wife, Chrissy, attended ALAS’s annual conference at La Concha Hotel and Resort in San Juan, Puerto Rico, from Oct. 5 to 7, culminating in an awards dinner, which was a black tie gala.

“It was an inspirational event, so many kindred spirits were there, including administrators from all over the country, sponsors and venders for education resources that support the work the association does,” Martinez said in a telephone interview.

Martinez works at Norwalk Public Schools as the education administrator for school counseling and social services for grades K-12. 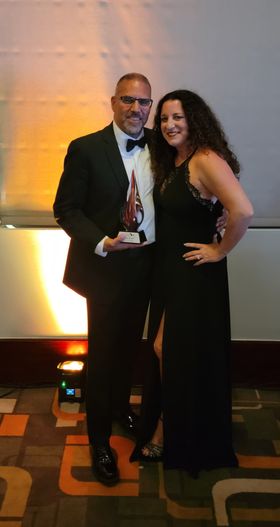 “I supervise the school counseling program and support staff, which is social workers, school counselors and school psychologists,” he explained. “I’m the mental health guy, anything to do with social emotional learning, the crisis team and counseling. I’m the care coordinator for mental health.”

Martinez and his wife have been together for 10 years and married for four. The couple has four children between them.

George, 19, is a Monroe volunteer firefighter, daughter Kendyl, 16, year is a junior at Masuk and a junior firefighter. Julian, 11, is the youngest, and Martinez’s oldest son, Jimmy, 23, lives with his mother.

James Martinez once served on the Monroe Board of Education, from 2017 to 2019.

Of her husband receiving the ALAS Administrator of the Year Award, Chrissy Fensore Martinez, who has had a long career in special education, said, “Jim is one of the people I respect most in the field of education and I’m very proud of him and the work he does for kids. He’s a child advocate, so he always has the needs of kids at the forefront of his mind. He’s deserving of this recognition.”

Martinez said his late parents had a strong influence on his life. Anastacio and Valentina Martinez grew up in Puerto Rico, where they fell in love and married, before moving to New York City from the U.S. territory in the 1950s.

James Martinez attended city schools, where he said many students saw education as “something the lucky could get.”

“My parents made the difference — a major impact,” he said. “They were basically the models. They taught me how to serve others. My mother loved children and was a para-educator in my school in New York City. My parents were involved in church and serving others.”

“Winning this award was so important,” Martinez said of the ALAS honor. “My parents met and got married in Puerto Rico, so it was very special to receive the award there. I really felt them over there. I dedicated my award to them.”

Life in the Bronx

Martinez grew up in the Bronx, in the shadow of the old Yankee Stadium. He remembers watching baseball games from the L Train platform with other children and going to school.

“I was 12-years-old when I knew I wanted to be an educator,” he said. “I always had a connection with kids. I was always involved with youth groups and anything to do with mentoring kids.”

When he was in seventh or eighth grade, Martinez said he and another student volunteered to be classroom monitors, leading second graders through indoor recess, while teachers took their lunch breaks.

“My first language was Spanish,” Martinez said. “Between ‘Sesame Street’ and school, I picked up English and I remain bilingual. It’s a benefit and a blessing to have that, because the work I do can contribute to two populations.”

Martinez’s first teaching job was at his alma mater, Cardinal Hayes High School in the Bronx. “It was built in 1941,” he said. “Its claim to fame is Regis Philbin and Martin Scorcese graduated from there.”

Having graduated from city schools, Martinez is committed to helping others to succeed.

“The motivation, there’s a difference between our children growing up in Monroe to me in South Bronx — it’s like polar opposite lives,” Martinez said. “I just want to give kids, especially in urban districts, a chance to transcend all that.”

Martinez was eventually hired as an assistant principal, then as the principal of Fox Run Elementary School in Norwalk, where he served for 12 years.

Three years ago, Martinez used his counseling degree and past experience in school counseling to transition to central office for Norwalk Public Schools, where he serves in his current role.

Boots on the ground

Aside from the way Martinez performs his day-to-day responsibilities, one of the things that stood out to ALAS was his efforts to bring Norwalk High School students back to school following the COVID-19 lockdown.

Martinez said some students felt anxiety to return to a building full of peers and staff members, while others dropped out to work and help their families, after parents lost their jobs during the pandemic.

Then there were the students who came back to school. Educators had to help them to re-engage with their normal routines.

“I led a district-wide attendance and engagement team and worked closely with community outreach workers and providers to support students in need of more mental health support,” Martinez said.

“It was literally down to boots on the ground,” he said. “I was with counselors and social workers, going to students homes and trying to get them to come back to school and re-engage.”

Martinez helped start a twilight academy, so high school students who worked during the day, or who felt less anxious being in a smaller group environment, could attend classes at night. The district also provided mental health support as needed.

Sadly, educators could not get some students back into school, but Martinez said a higher percentage of students successfully re-engaged.

“The priority was to give them an opportunity to re-access education,” he said. “It was more rewarding and inspiring to do that work, because the success rate was pretty high. It was a team effort. It was just a pure honor to be in a role where I could coordinate that.” 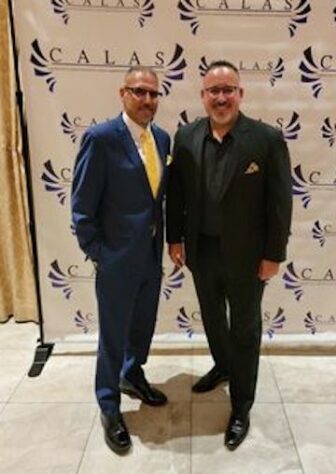 James Martinez, left, stands beside Dr. Miguel A. Cardona, secretary of the U.S. Department of Education.

On Sept. 1, Martinez received a letter from Dr. Maria Armstrong, executive director of ALAS, informing him that he was chosen as this year’s Administrator of the Year recipient.

“ALAS is proud of your bold and unwavering leadership by placing the health and well-being of students and staff above all else,” Armstrong wrote. “Your leadership, commitment and voice as an advocate for the social, emotional and academic well-being of students and staff is evident in your participation as an ALAS member and is a testament to the aligned vision, mission and goals of ALAS.”

ALAS is committed to providing a perspective to all aspiring school and district administrators including superintendents through programs, services, advocacy, and networks rooted in Latino experiences and culture.

ALAS has nearly 8,000 members across 18 state affiliates with several more states soon to be a part of the ALAS Familia. Our Vision, Mission, and Goals are to provide leadership at the national level that assures every school in America effectively serves the educational needs of all students with an emphasis on Latino youth through continuous professional learning, policy advocacy, and networking to share practices of promise for our students and the communities where we serve.

Martinez said ALAS is also the Spanish word for wings and the symbol of the organization is an eagle soaring to higher levels.

Dr. Miguel A. Cardona, secretary of the U.S. Department of Education and the former commissioner of education in Connecticut, is a prominent member of ALAS.

Martinez said he wanted to go to ALAS’s conference in Puerto Rico, but did not think he could go. Then after learning of his nomination for the award, his school district strongly supported his making the trip.

“I’m very humbled and honored,” Martinez said. “The most meaningful part of the experience of receiving this recognition for me is a validation of what my parents instilled in me. Just the characteristic of wanting to serve others, especially the youth. It’s just a validation of all the years in education that I was recognized for doing the work I always wanted to do.”

“The thing I most love about the work that I do is to be a part of contributing to the success stories of all students, but aligned with the vision of ALAS with an emphasis on the Latino population,” Martinez said.