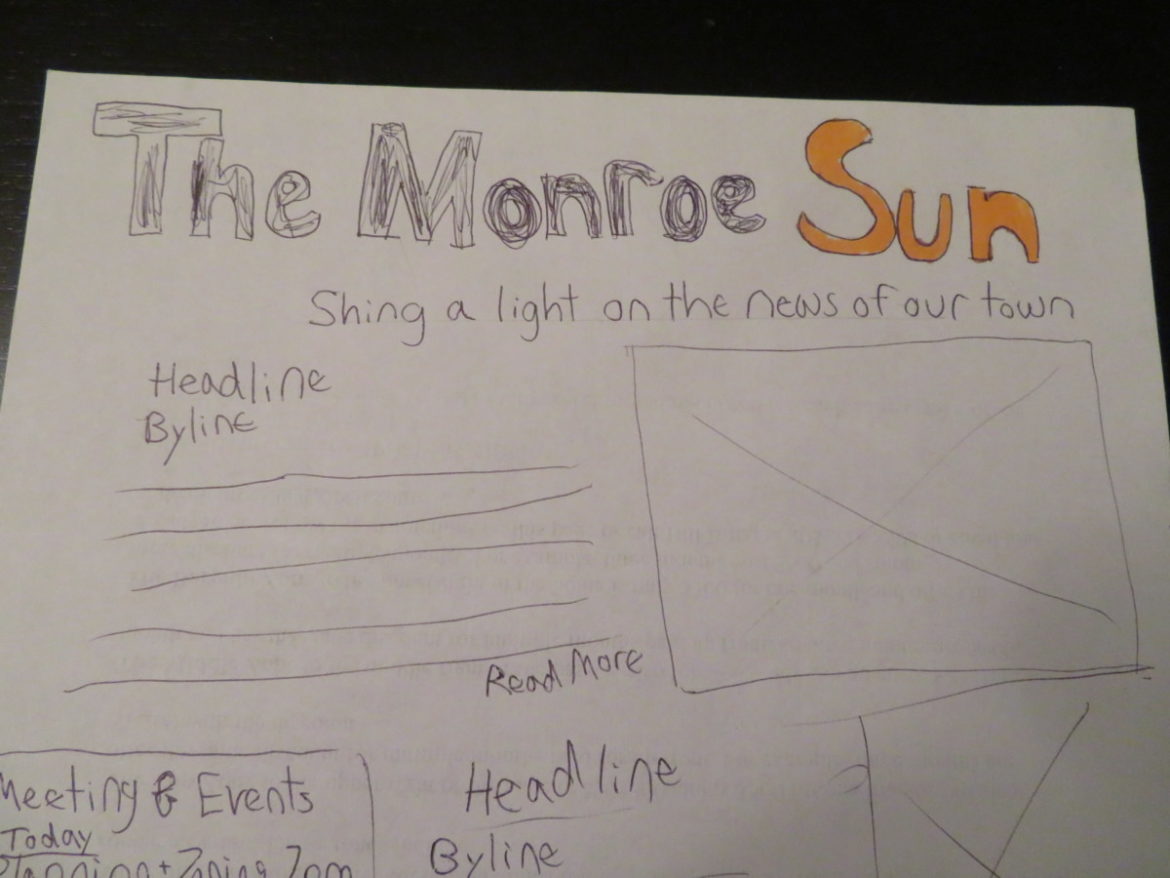 Before The Monroe Sun was a website it was a concept on paper.

MONROE, CT — Today The Monroe Sun celebrates the first year of its existence as an online publication dedicated to covering the town. It’s been quite a year, covering a municipal election, the annual budget, feature stories on notable residents and now we’re weathering the Covid-19 pandemic together.

I want to thank everyone who’s visited the site, commented on stories and shared posts with their friends. I also appreciate the assistance from local politicians, educators, town employees, volunteers, police and firefighters who share news and information, as well as the citizens who sent me story ideas. 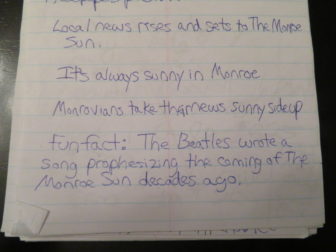 Had a little fun with slogans for The Monroe Sun in the planning stages. None of these ideas were ever seriously considered!

A shout out to Karen Coffey and Barbara Fahr of the Monroe, CT Residents Facebook page for helping me promote my articles. Karen has also written schedules of town events (when we had them!) and shared amazing photos.

Thank you to my wife Jennifer for allowing me to pursue my dream of starting my own news site covering the town I grew up in and for suggesting The Sun as the name.

I chose the Largo theme from WordPress, then hired Dana Rockel of Rockel Design, who set up and hosted the website, navigating through any online glitches.

Here’s a nice tweet from Matt DeRienzo, who was vice president of news and digital content for Hearst Connecticut Media at the time.

Before working to get the website up and running, did I report and write news to populate it? Of course not, I wrote a script for an online movie trailer to promote the venture!

“The Rise” tells the story of how the town became a news desert when it lost its hometown paper, The Monroe Courier. A reporter was found among the ruins and a new website was born.

Thank you to Jennifer for shooting video during the times I was “acting,” and for a cast that included my brother-in-law Ben Procaccini and my niece Kylie, who acted the heck out of the first scene.

Special thanks to my friend, and Monroe resident, Victor Malindretos, for getting permission to use an ambulance and playing the role of the lead EMS crew member. Easton EMS volunteers Carolyn Kearney and Matthew Hull, who had no idea they would be in a video that day, were great sports. 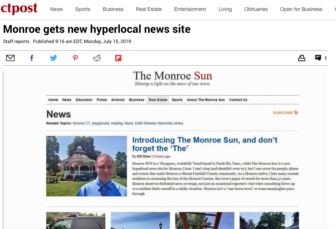 When the Sun debuted on July 15, 2019, I had no idea it would receive the media attention it did.

Thank you to the Connecticut Post for its article, and to Phil Hall of the Fairfield County Business Journal, who wrote an online article, then took the time to visit my home for an interview and photo for the print publication.

Aaron Johnson, who I had worked with as a reporter at the Republican-American newspaper in 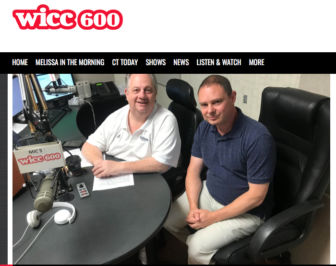 Waterbury, had joined WICC 600. Aaron invited me to appear on the radio show, “Connecticut Today with Paul Pacelli.”

I was nervous, but Paul was such a nice guy, who put me at ease.

I also want to thank everyone who “liked” and followed me on Facebook, as well as those who took the time to write a nice review!

One of my main goals is to provide local news for free, so the advertisements and donations The Monroe Sun receives are that much more important.

I sincerely appreciate the generous donations The Sun received from 13 residents since it launched last July, many with inspiring messages of support!

Ray Giovanni, president of the Monroe Chamber of Commerce and chairman the Monroe Economic Development Commission, has promoted The Sun to people in the local business community from day one. The EDC has also purchased ads to promote its events.

A special thanks to the businesses and organizations on the growing list on The Sun’s Our Supporters page.

Sippin Energy Products, Intrinsic Health Source and Local Ann Aesthetics are businesses run by families and residents who genuinely care about their community and donate to worthwhile organizations and causes.

I am also proud of The Monroe Sun’s partnership with The Center for Family Justice, whose staff members and volunteers assist victims of domestic and sexual violence and child abuse, while educating the public and leading prevention efforts.

Well, after one year The Sun is still going strong. Looking forward getting past 2020 and seeing what next year will bring!

8 thoughts on “After one year, The Monroe Sun is still shining”