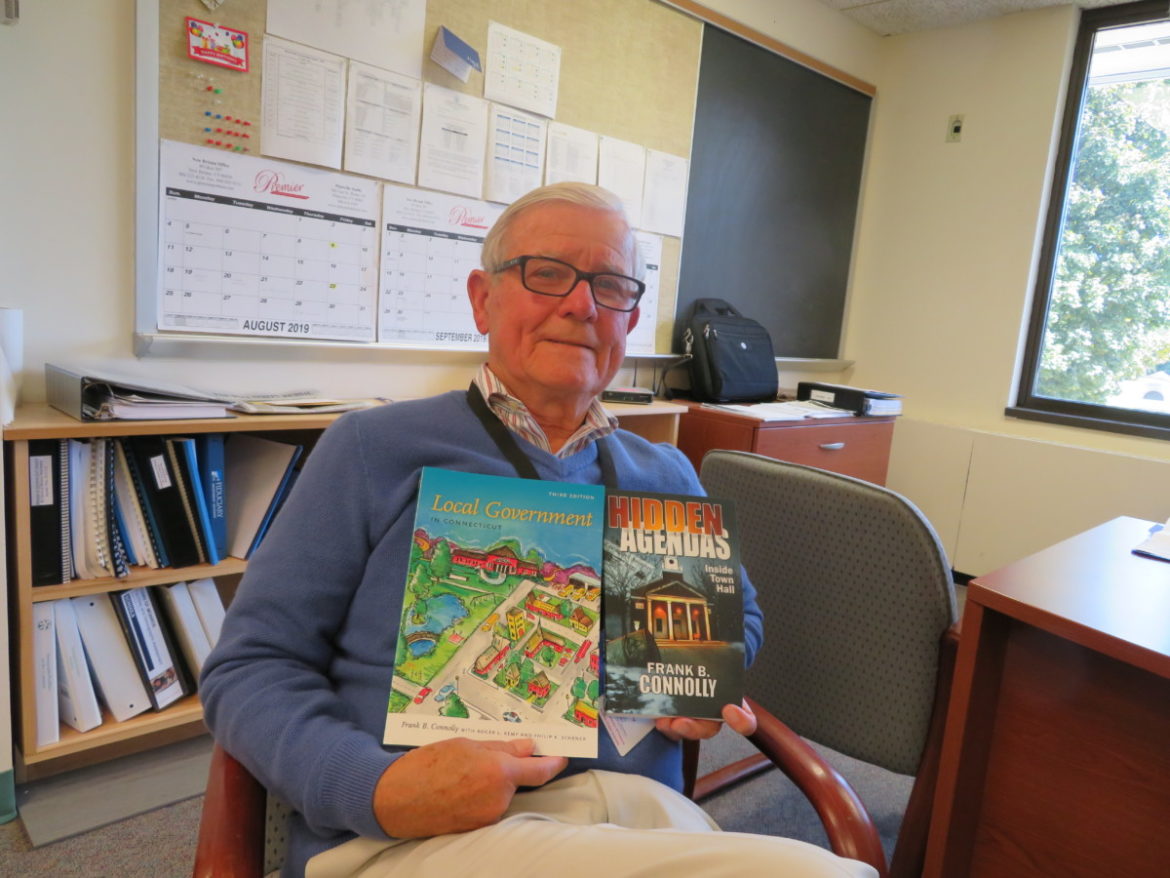 Frank B. Connolly brings deep experience as interim finance director for Monroe public schools. Connolly worked for eight school districts, as well as having run municipalities over a 25 year period as the town manager for Coventry, Newington and North Branford.

As a young man, he lived in the jungle of Gabon, Africa, for two years with the Peace Corps, where he lived on plantains, hot peppers, and elephant and monkey meat.

“It really was a wonderful experience in my life — learning and changing my outlook on things,” Connolly said during an interview at Central Office, though he winced at the thought of eating elephant, which he compares to chewing on leather. “It gives you a perspective on the value system and what is real in life.”

“I did traveling in Africa and it really gives you an appreciation for the political stability of our government and the financial stability of the U.S.”  he said. “We have one of the plainest currencies in the world. It’s the least colorful, but the most stable. It’s the world’s standard. I remember coming home from the Peace Corps, walking up and down the aisle of the grocery store, and looking at the marketing marvel of the U.S.”

Connolly is also the author of two books, the widely used textbook “Local Government in Connecticut,” now in its third edition, and the novel, “Hidden Agendas: Inside Town Hall.”

“It’s fiction,” Connolly said of “Hidden Agendas.” “It’s based on some of the shenanigans I’ve seen over the years in local government.” Then he added with a grin, “the names have been change to protect the guilty.”

He’s trying to avoid that scenario in Monroe. Since being hired by Monroe public schools on May 10, Connolly has worked to make the district’s finances more transparent and easy to understand.

He and Terri, his wife of over 50 years, both grew up in New Haven. The couple now lives in Portland and has five children and six grandchildren.

In addition to his work at school districts in the state, Connolly teaches public administration at the University of New Haven’s graduate school as an adjunct professor.

Connolly came to the district at a time when there was a more than $1 million hole in the 2018-19 budget from unanticipated special education costs and a high number of claims in the school system’s self-insured health care plan.

“He’s been a tremendous asset to us on many levels,” Superintendent of Schools Dr. Jack Zamary said of Connolly. “He’s incredibly knowledgeable, having experience in both municipal government and with boards of education. He’s really professional and has brought us a wealth of good ideas.”

Connolly, who is under contract through January, plans to help with the hiring process, then to assist the new finance director through the transition once a long term hire is found. This includes payroll, budgeting, the administration of state and federal grants, labor contracts, accounts payable and billing.

“We handle the business of education,” Connolly said of the position.

The keys to the castle 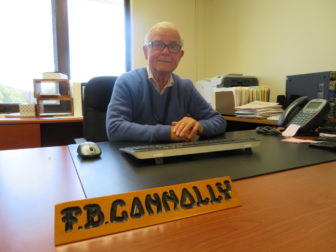 Frank B. Connolly has been the interim finance director for Monroe public schools since May 10.

Connolly and Zamary recently sat at a round table in Connolly’s office to go over budget documents.

“We’re trying to reformat the budget so it’s more understandable, both to the Board of Education and the public at large,” Connolly said. “With the new format, in about 10 minutes one can understand the budget and the shifts taking place. At the same time, there will be a lot of detail.”

Budget sheets will show a line item’s current amount, actual expenditures for the prior year, the adopted budget, the proposed dollar change and percentage, and a bottom line with totals.

“This is an Excel spreadsheet,” Connolly said. “The backup will be our financials. A three page summary will equal what’s in the Excel spreadsheet. It’s followed by what we call ‘the keys to the castle,’ how to read it.”

The budget will explain what a program is and what building it is held in. Each expense, such as life insurance, will have a numerical object code to make it easier to find line items for it within the budget.

The superintendent will present his budget proposal for 2020-21 on Dec. 16, but Connolly already walked Board of Education members through the new budget format at a recent board meeting.

First Selectman Ken Kellogg said town officials had great communication with Connolly, while closing the deficit in the school board’s 2018-19 budget together.

“My finance director has only said good things about him and that he worked in a collaborative way,” Kellogg said. “We appreciate his professionalism and transparency.”

“Frank’s been doing a lot of great work,” Board of Finance Chairman Michael Manjos said. “When he first started it was supposed to be interim, but we’re keeping him on as long as possible because he’s making positive changes, getting to the bottom of problems we’ve had and presenting the information in a way that’s more transparent and easier to follow and understand.”

Board of Education Chairwoman Donna Lane said the school district was lucky to find someone of Connolly’s caliber for the interim role.

Lane said Connolly spent a “very exorbitant amount of time” going through special education and making sure budgets are being done properly for the board, going through policies and making recommendations, working with Sodexo in overseeing food services, and overseeing all aspects of transportation.

“He really has jumped in and got his hands around everything,” Lane said, adding board members are pleased with changes to make the budget easier to understand.

Lane said board members will not only see what the superintendent proposes for Monroe’s public schools, but the administrators’ initial requests and what they submitted. “You’re going to see the whole, entire package,” she said.

“We’re just sorry to see Frank is only an interim and wants to go back to his retirement,” Lane said.

Connolly graduated from Notre Dame High School in New Haven, earned his undergraduate degree from Providence College in Rhode Island, a Master’s of Science degree in education and social studies from Southern Connecticut State University and a second Master’s in city planning and public administration from the University of Virginia.

His first job was as coordinator of the community development program in North Branford, a place he ended up coming back to 20 years later when he became the town manager.

After being a town manager for 25 years, Connolly served as school business manager in Stonington for six years before retiring.

Since then, he has worked on an interim basis for boards of education in Killingly (twice), Thompson, Stonington, Rocky Hill (twice), Tolland, for Jumoke Academy in downtown Hartford, Ansonia, North Haven and now Monroe.

“Each board of education is different,” Connolly said. “You have a commonality of duties and the wealth of the communities and how they’re run. I would say Monroe is one of the best in regards to relations to the town. The working environment here is very good and there is a good dialogue with the Board of Education and the town.”