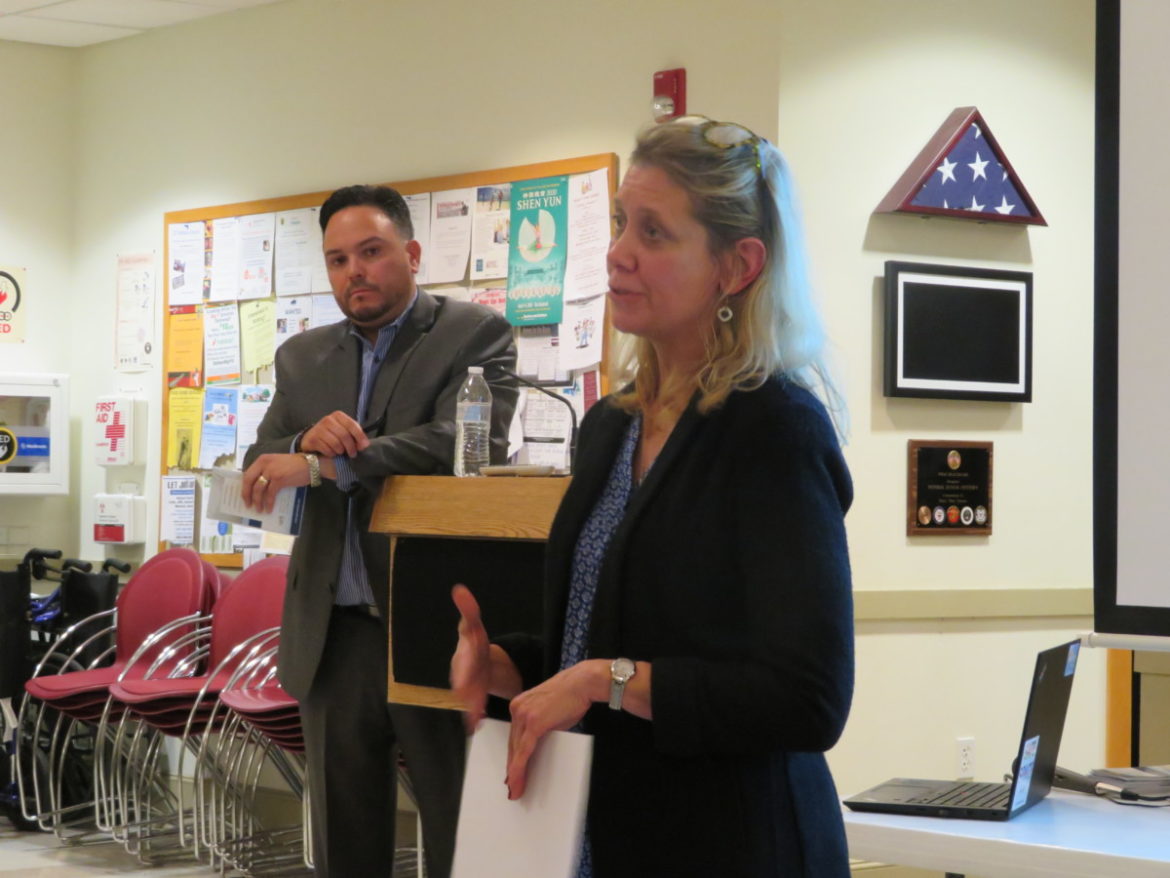 Loved ones of those who commit suicide sometimes say it came out of nowhere, but Connie Crowell, the program director for Alcohol and Drug Awareness of Monroe, says there are always signs.

The 14 people attending an ADAM program at the Monroe Senior Center Wednesday night learned how to read the signs of trouble, start a conversation and connect those at risk to the resources they need.

“You don’t need specialized expertise, but tonight we’ll teach you to ask the important questions,” Crowell said. “The ‘S’ word, the suicide word, is hard to talk about.” 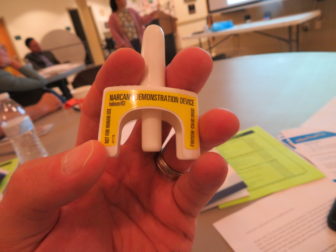 Everyone attending the Alcohol and Drug Awareness of Monroe (ADAM) program at the Monroe Senior Center Wednesday evening went home with a Narcan nasal spray kit.

Crowell and Carlos Reinoso III of ADAM led the QPR course, then Giovanna Mozzo made a presentation on opioid addiction and Naloxone (Narcan), a life saving drug that can reverse an opioid overdose.

Mozzo also gave a demonstration on how to administer Narcan nasal spray, tilting the person’s head back, holding the spray container with your pointer and middle fingers, and inserting the nozzle into one nostril before pushing the plunger.

The Connecticut Office of the Chief Medical Examiner released statistics on accidental overdose deaths in the first six months of 2019 and there were 544, according to Reinoso, who said the projection is for that number to double by the end of the year. 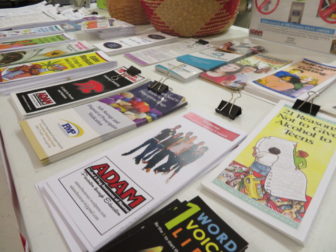 A table inside the Monroe Senior Center Wednesday night offered a wealth of information on suicide prevention and drugs and alcohol addiction.

Crowell and Reinoso showed a video with three vignettes. In one, Cameron, 17, a star high school football player, was on a team about to win a state championship and he earned a college scholarship with his play.

Reinoso noted how young people often seem like they have it all. “Despite the fact he had a full scholarship, he said he wished he could find a way for all the pressure to go away forever,” Reinoso said. “It’s everyday people in everyday situations.”

Another vignette was about an older man named Walter, who lost Madge, his wife of 52 years. He said his life is empty and he feels like he is more of a burden on his family.

The third vignette was of a woman whose husband was a respected businessman in the community. She was also well-liked, but then she was arrested for DUI. She thought she tarnished her family name and should end it.

He said people from all walks of life can feel depression, pressure and anxiety.

Reinoso and Crowell shared suicide myths and facts. Among them, a myth is that suicidal people keep their plans to themselves. A fact is most suicidal people communicate their intent within a week of a suicide attempt.

“It’s a myth that by mentioning the word suicide, you’re putting it in the person’s head,” Crowell said. 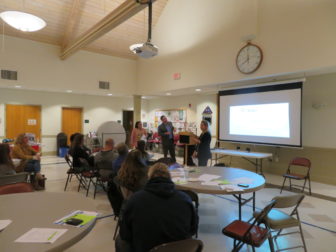 Direct verbal clues are when a person says things like, “I wish I were dead,” “I’m going to end it all” and “if (such and such) doesn’t happen, I’ll kill myself.”

Indirect verbal clues can be, “I’m tired of life. I just can’t go on.” “My family would be better off without me,” and “pretty soon you won’t have to worry about me.”

Some behavioral clues could be acquiring a gun or stockpiling pills, co-occurring depression, moodiness and hopelessness; giving away prized possessions, a sudden interest or disinterest in religion, drug or alcohol abuse, a relapse after a period of recovery and unexplained anger, aggression and irritability.

Some situational clues could be being fired or expelled from school, a recent unwanted move, loss of a major relationship, death of a loved one or the diagnosis of a serious or terminal illness.

Police Det. Nicole Buckley, who attended the course, said, oftentimes people contemplating suicide will post something on Facebook. She encourages anyone who sees a troubling post to call police, who will do safety checks and try to get the person the help they need.

Among tips shared on how to ask someone if they are contemplating suicide was, “when it doubt, don’t wait, ask the question.”

If the person is reluctant, be persistent. Talk to the person alone in a private setting. Allow the person to talk freely and have your resources handy: a QPR card, phone numbers, a counselor’s name and any other information that may help.

A less direct approach could be asking, “have you been unhappy lately?” “Have you been so very unhappy lately that you’ve been thinking about ending your own life?” “Do you ever wish you could go to sleep and never wake up?”

Crowell said asking the question is the first step to getting the person to open up and talk to you, so it is important not to come off as judgmental. “It’s more important to ask the question, listen and go from there,” she said.

The QPR course says to try to make someone contemplating suicide feel hopeful, offer to go with them to get help and ask them to promise not to kill themselves until they’ve found help.

“Your willingness to listen and to help can rekindle hope, and make all the difference,” according to the course presentation.

The best referral is taking the person directly to someone who can help.

For an immediate crisis, dial 2-1-1 and choose option 1. Or dial 911 and ask for a crisis intervention trained officer. If it is not a crisis, refer the person to a local agency or support group.

Local resources include TheHubCT.org; PreventSuicideCT.org and the American Foundation for Suicide Prevention: AFSP.org. Online resources and training can be found at SPRC.org.

Those attending Wednesday’s program went home with a Narcan nasal spray kit. There was also a table of pamphlets with information on suicide prevention and drug and alcohol addiction.

Edward Gratrix said his biggest takeaway from the event was the direct ask of the suicide question. “Before this, I wouldn’t consider doing it,” he said.

“I was surprised how many deaths there were in Monroe, even four,” Mike Ganino said of suicides. “I think tonight was a great start in enlightening parents and kids.”

Gloria, Ganino’s wife, said all nurses and counselors in the Monroe school system will have QPR training. “I’m a nurse at Fawn Hollow,” she said, “so I’m excited to share this with my coworkers.”