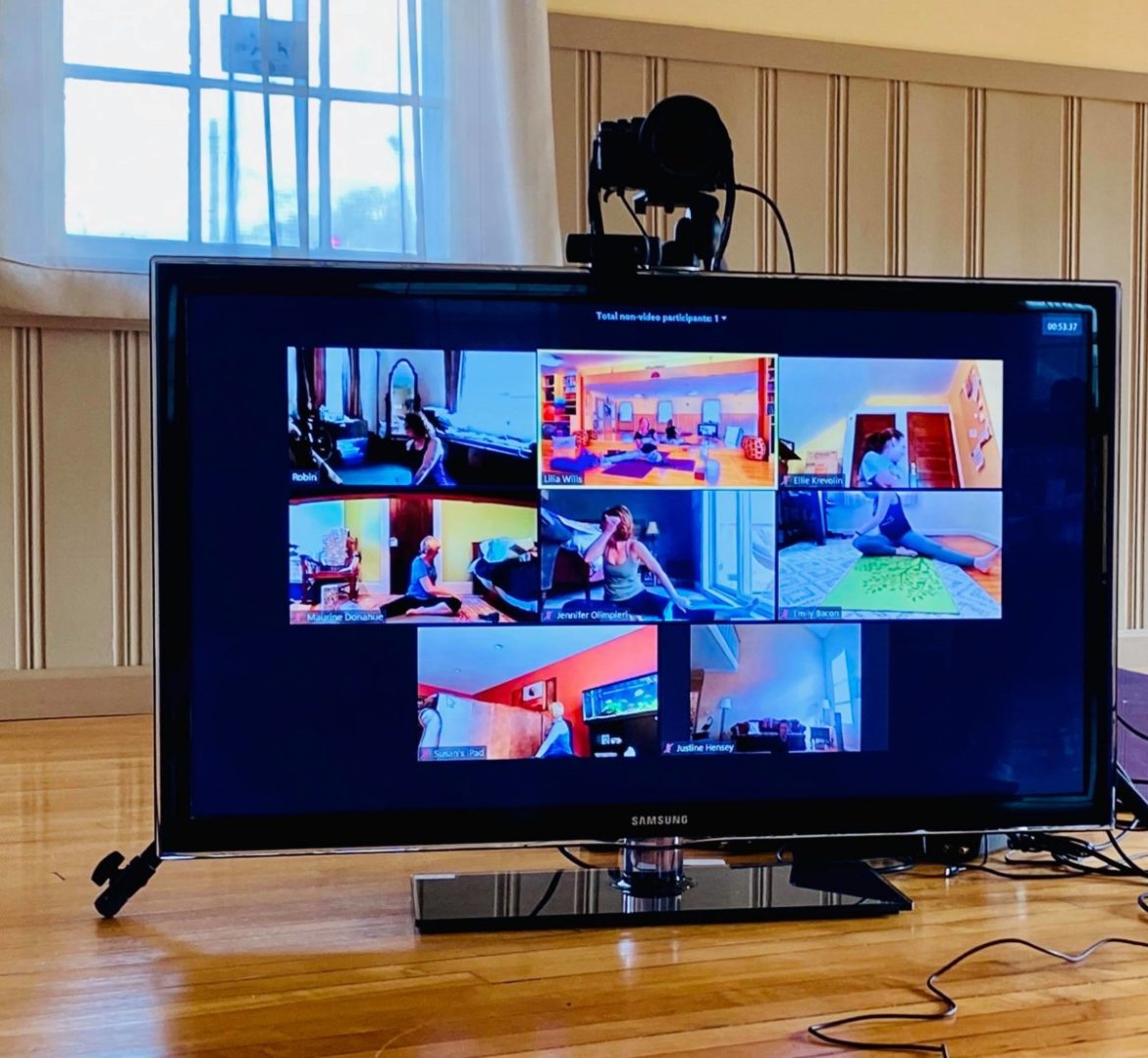 Bliss Yoga has gone the route of many other businesses by using Zoom to operate virtually amid the global pandemic. Contributed

MONROE, CT — Lilia Wills sat in the lotus position on a purple mat inside her Bliss Yogo studio on Main Street one recent afternoon, while waiting for her students to log into an online class via their computers and iPads.

Social distancing in the age of Covid-19 may prevent in-person gatherings but, like many businesses, Wills relies on Zoom to stay afloat. Soon the video images of women dressed in T-shirts, tank tops, jogging and yoga pants appeared on the screen. After Justine Hensey signed in, they were ready to go.

“It’s been a little bit of a struggle to be honest,” Wills said of adjusting to the technology. “Sometimes the audio doesn’t work.”

Wills’ husband Charlie, an electrical engineer, helped her to set everything up and most of Bliss Yoga’s clients chose to use wifi to stay with their programs.

“My clients are very amazing,” Wills said. “If there is trouble with Zoom, I compensate them and check them out of class. It’s great. I see an opportunity to do more virtually.”

For convenience, Bliss Yoga offers a Mind Body phone app allowing students to sign up and pay for classes, cancel classes when they can’t make it, and to track their sessions on the go.

However, Wills said she misses seeing her clients in person and giving hugs.

Wills was born in Moldova, which was part of the former Soviet Union. She applied for religious asylum and was selected to be an exchange student in the United States in 1993.

Her biological parents died and Wills was adopted by Karl and Lorinda Pernek. Karl owned a custom cabinetry business in Monroe for 40 years.

“They are amazing people. I love them dearly,” Wills said

She went on to earn a bachelor of arts from Southern Connecticut State University and a Master’s degree in teaching English to speakers of other languages from Fairfield University.

Prior to teaching yoga, Wills taught in the Monroe School system and for Valley Regional Adult Education.

She and her husband Charles, a Masuk alum, have a daughter, who is a student at Masuk High School.

Wills first got into yoga and meditation at age 19, when she was suffering from severe TMJ, a clenching of the teeth and jaw.

“I’ve been practicing yoga more than half my life,” she said. “I get calmness. I’m type A intense. It keeps me calm and injury free.”

Wills is an avid hiker and runner, having participated in events like the Spartan Beast and the 55K Antelope Canyon Ultra. She credits yoga and meditation with preventing injuries to her muscles and limbs.

When her daughter was a baby, Wills pursued a career as a yoga instructor, completing nine months of intense training on weekends. She became a Yoga Alliance Certified teacher in late 2009.

Wills offers classes for mommy and me, teens, prenatal, partner, group and private, birthday and special events, date night yoga, stand up paddle board yoga, meditation and yoga for runners. She has also led sessions for people suffering from PTSD.

Wills had taught classes in several places over the years, including in Fairfield, before opening her own studio at 160 Main St. in Monroe six years ago. She founded Bliss Yoga eight years ago.

The small business has been a sponsor of community events in town, like Sprint for Monroe, and is a supporter of local charities and causes like the Monroe Food Pantry.

“I chose to open Bliss in Monroe, because I wanted to share my passion for yoga and well being with my local community, my daughter’s school and all the schools in town,” Wills said.

Bliss Yoga’s clients include men and women, but women made up the entire group in a late afternoon session on Monday, May 4.

“It is wonderful to be able to participate together, but it does not compare to being in the studio,” said Jennifer Olimpieri. “My Internet is shaky, I think because of the wind.”

“I live in New Haven. It’s good to see everyone’s faces,” Maurine Donahue, a teacher in Monroe, said of seeing others’ on Zoom. But she said she looks forward to coming to classes in person when she can.

“I’m a teacher,” said Emily Bacon. “I would come home with no energy for anything else, so being at home now, this has kept me sane. I haven’t had a migraine since doing this. It’s kept me calmer and I hope to see everyone in person after this.”

“I think everyone would like to be in person for the connection piece, but this is a close second,” said Justine Hensey. “It’s great to have the option to do this at home.”