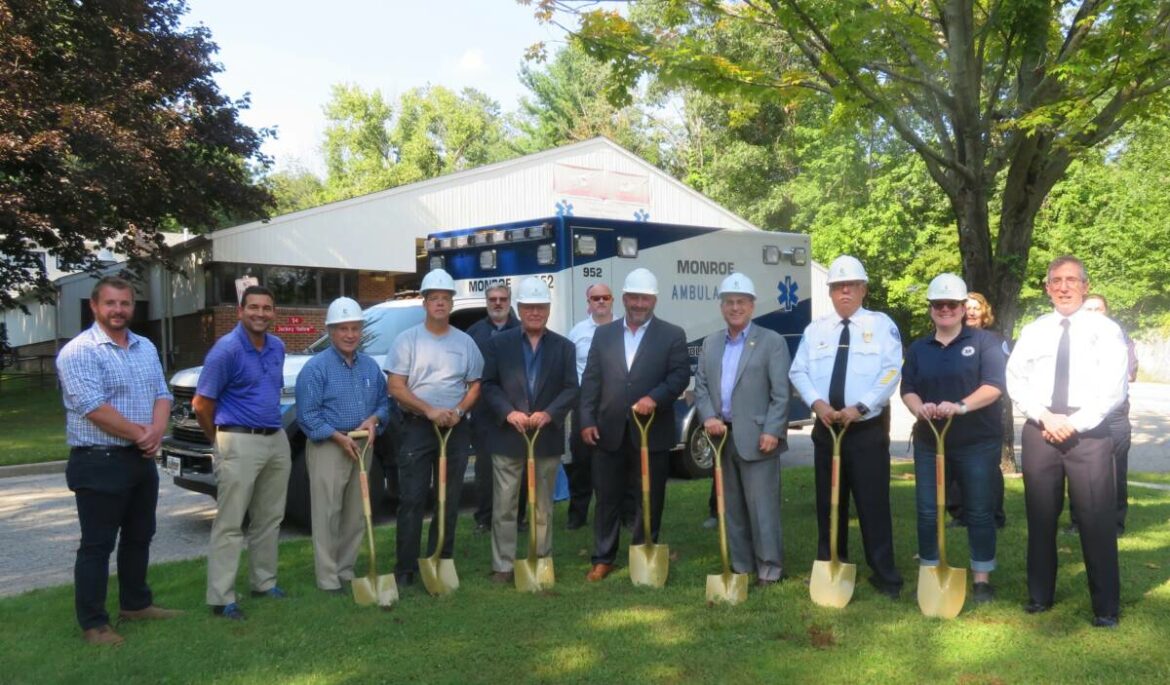 MONROE, CT — Town officials and Monroe Volunteer Emergency Medical Service members basked in the afternoon sun at EMS headquarters Monday, with some wearing white helmets and holding golden shovels for the groundbreaking ceremony marking the start of construction for the building project to update the old facility at 54 Jockey Hollow Road.

“It is amazing. This has been well over 10 years,” EMS Chief Don Smith said of the planning and approval process. “To see it start, I’m thrilled. We are looking forward to moving into a facility that will serve us for another 50 years. It’s a great day. I look forward to having a ribbon cutting for the grand opening when the building is finished.”

The Monroe EMS used to work out of the electric room of the police station on Fan Hill Road, before moving to its current location at the Jockey Hollow Firehouse in 2001.

Over the years, Smith said the ambulance service has seen an annual call volume increase, rising from 900 to 1,500 calls. The EMS, which has between 45 and 50 members, has outgrown its facility. 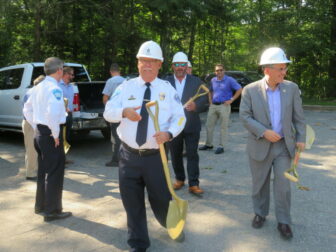 There is no office space and the classroom, which doubles as volunteers’ dining room, is too small. There is no restroom upstairs and there is an unworkable shower on the lower level, so volunteers have to go home to shower and change, according to Smith.

Aside from providing an adequate training room, sleeping and showering facilities, office areas and other things the EMS needs to function, the number of parking spaces will increase from 20 to 64.

Smith expressed his gratitude to all of the town officials and volunteers on the EMS Building Committee for their hard work. “It’s nice to see we’re valued here,” he said. “We’re not here for the glory. It’s neighbors helping neighbors.”

“We’re just really pleased and glad to have community support for this vital project for the town,” said First Selectman Ken Kellogg. “This project was never about being grandiose. It’s about serving the needs of the community. This is really going to provide an appropriate facility at an adequate cost. Thank you to everyone who supported this project.” 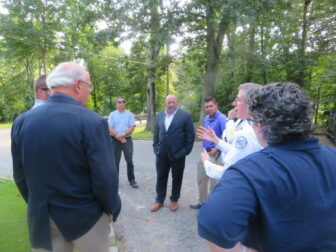 John Kwasniewski, of Burlington Construction, the project manager, said the estimated completion date of the project is Sept. 23, 2022.

The first selectman credits former State Rep. J.P. Sredzinski with securing the grant. Sredzinski could not make Monday’s groundbreaking ceremony, but his successor, Rep. Tony Scott, R-112th, was in attendance.

“I want to thank J.P. for all of the work he did and the fruits of his labor will be seen for many years with this building,” Scott said. “It took many years to get to this point, but it goes to show how our town perseveres.”

Jacunski Humes Architects designed the project, in an effort led by the EMS Building Committee, which was created around three years ago.

“These are the people who supported the community during recent trying times,” he said. “Our volunteers, who selflessly work throughout the night, will have a great facility to meet their needs. I’m just very proud I was chosen to serve on this committee, where I was surrounded by knowledgeable, talented people. Today is a very good day for the EMS services of Monroe.”

Brenna, an EMS volunteer of 17 years, is also chairman of the EMS Commission. He glanced at a group of EMS members standing by him, smiled and said, “we’ve all been waiting for this day for a long, long time.”

Brenna said he is pleased that a lot of the work for the project will be performed by local contractors.

Andrew Stepanoff lives in town and has served as an EMS volunteer for 15 years. As an engineer, he said he was impressed at how building committee members worked to get contracts signed quickly, before inflation for materials and labor hit.

“Monroe is a great family oriented town,” Stepanoff said. “It’s fiscally conservative and the building is being built to that philosophy.”

Striving to be good neighbors 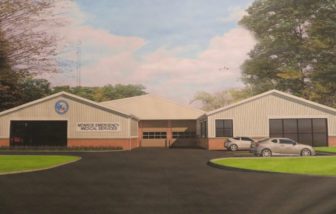 The architectural firm Jacunski Humes’ computer rendering of the renovation and addition to the EMS headquarters on Jockey Hollow Road.

Kwasniewski said he plans to meet with the superintendent Tuesday, so they can familiarize themselves more with the building before construction begins within a few weeks.

“We want to make sure it’s weather tight before the winter,” he said, adding it will allow interior work to be done during the colder months.

Kwasniewski said electrical, alarm and plumbing systems must be kept running throughout the project, because the EMS will continue to use the building during construction.

“It’s really working shoulder-to-shoulder with these guys,” he said. “It’s a phased project.”

The Jockey Hollow Firehouse is nestled in a residential neighborhood, so town officials tried to work with area homeowners throughout the process. One night in January of 2020 the building committee hosted a neighborhood meeting to answer questions and listen to any concerns.

Kwasniewski expects that communication to continue during construction. He said a letter will go out to neighboring residents, and he may meet them in person, giving out his business card.

“If there are any questions or concerns, we’ll be available to them,” Kwasniewski said.

He said his construction company tries to restrict noisy work to after 8 a.m., adding they do not work on weekends, unless there is a specific deadline to meet or a weather event.

“Jobsite cleanliness is important, especially in front of the building, so people across the street don’t see a mess,” Kwasniewski said. “This is not a huge construction lot, so organization is critical.”