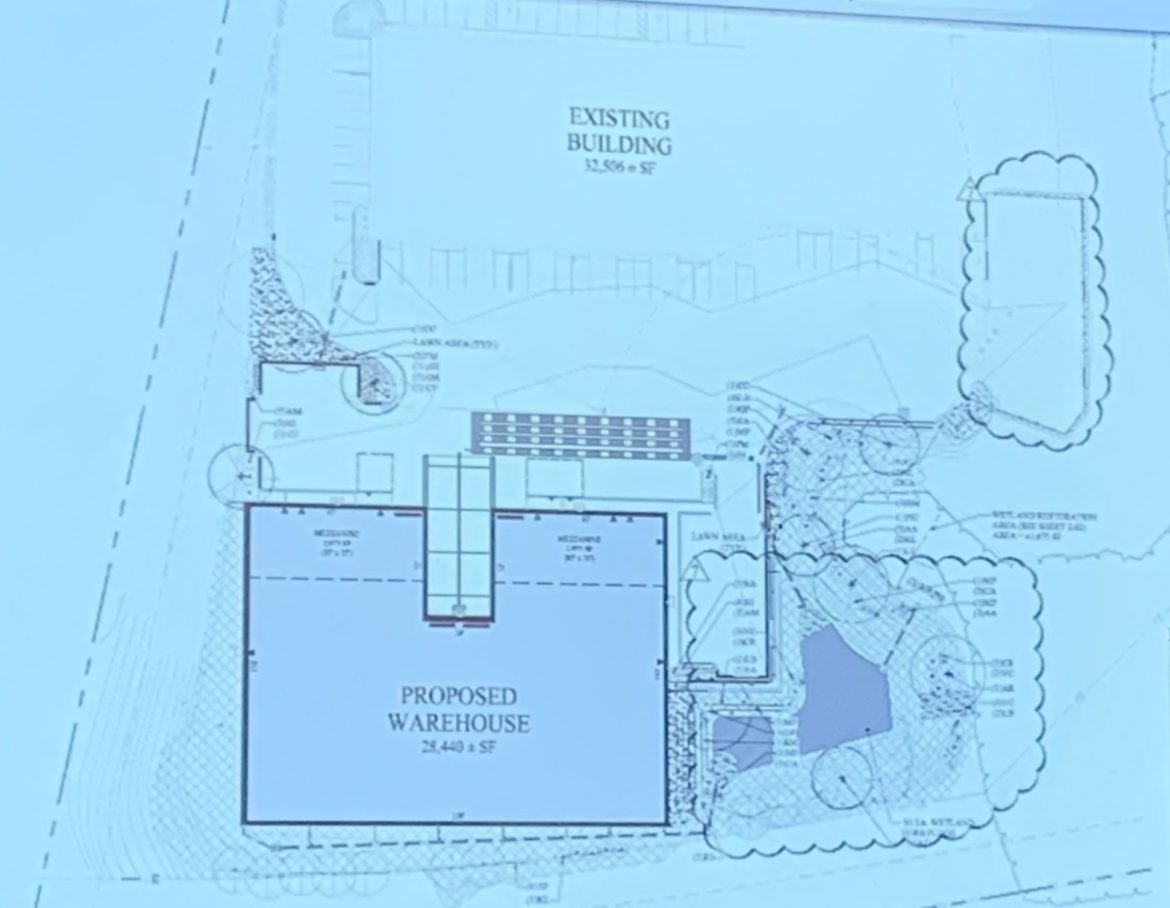 The plan for a new warehouse at 17 Enterprise Drive was shown during Thursday's Planning and Zoning Commission meeting.

Planning and Zoning Commission members will decide on a proposal to construct a 28,440-square-foot warehouse with a 5,950-square-foot office mezzanine at 17 Enterprise Drive.

On Thursday night, the commission directed land use staff to draft an approval to vote on at a future meeting.

Vice Chairman Michael O’Reilly wants to ensure guidelines are followed to protect a conservation easement and Chairman William Porter said that would be a condition of the approval commissioners will vote on.

The application is for the second phase of a previously approved project. The warehouse would be built behind an existing 32,506-square-foot warehouse, which still needs a certificate of occupancy.

The owner of the property, J & S Industries, LLC, is seeking special exception permit and site plan approvals for the new building.

Thursday’s Planning and Zoning Commission hearing was reconvened from Dec. 5 and the project already has an approval from the Inland Wetlands Commission.

Cyr said the former town sanitarian suggested that, because the septic is large enough, the new septic could be tied into the existing one, subject to State Public Health approval, according to meeting minutes from Dec. 5. The new building would have four bathrooms.

At Thursday’s meeting, commission alternate, Robert Westlund said, “I drove by the site and could see Dumpsters and containers in the back,” adding he was concerned all of it would not fit in the storage area.

Cyr said the owner plans to reduce the number of containers on the site.

Shade trees would be planted in front of the new warehouse and Cyr agreed to have a sidewalk along one side of the building.

Leon Ambrosey, a commissioner, said he had was concerned over the safety of having a handicapped parking space so close to a delivery zone in front of the building. Cyr agreed not to have the parking space there.

A timber guardrail is proposed along the driveway, which would lead to a parking lot with a total of 34 spaces. Cyr agreed to move a Dumpster to reconfigure the parking.

During the Dec. hearing, Cyr told the commission green giant arborvitaes standing between 10-to-12 feet tall would be planted, screening the building from view along the Rail Trail nearby, though the rooftop would be visible.