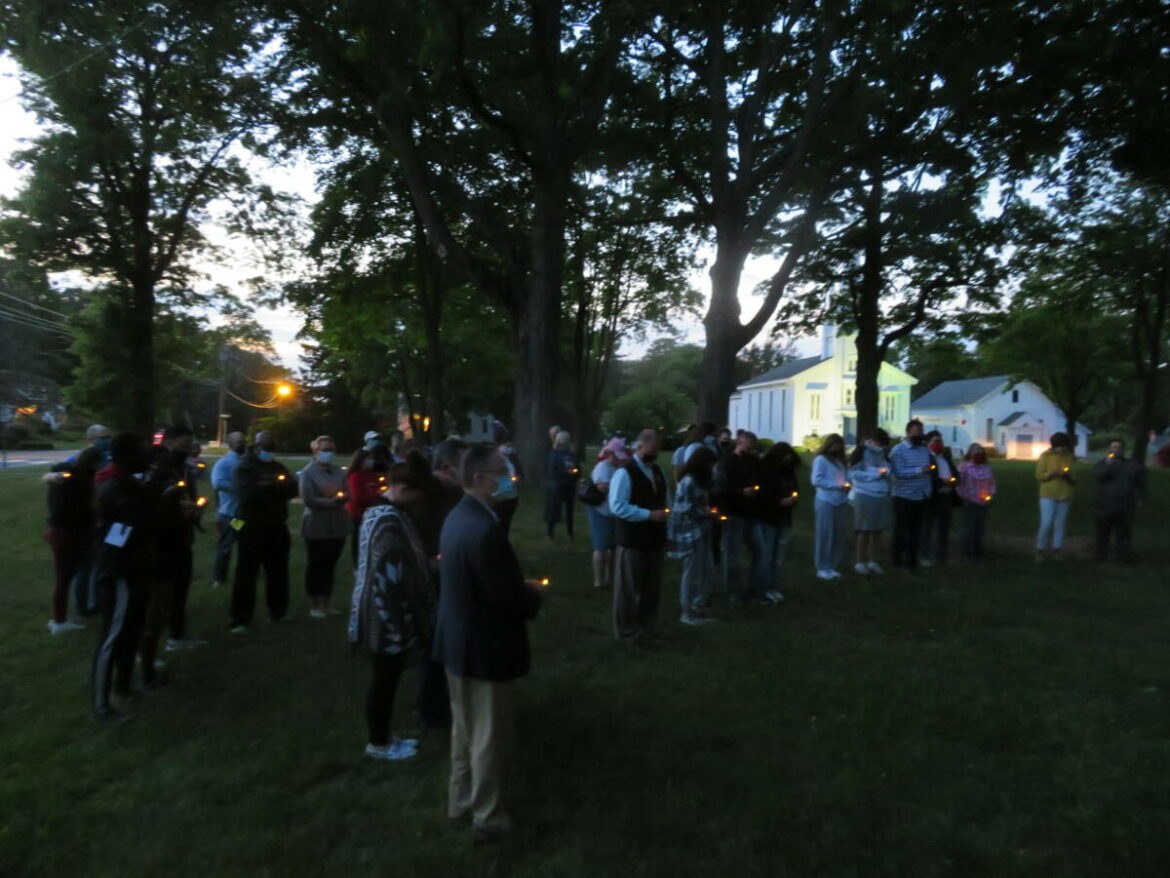 A crowd holds battery-powered vigil candles during a four minute and 23 second moment of silence at A Peaceful Gathering on the Green Tuesday night.

MONROE, CT — A Peaceful Gathering on the Green was held in Monroe last year, when townspeople showed solidarity against the actions of Minneapolis police officer Derek Chauvin, who kneeled on the neck of George Floyd for over nine minutes, as the African-American man lay handcuffed on the ground, frantically telling officers he could not breathe.

This spring, Chauvin was convicted of the murder of Floyd and on Tuesday, A Peaceful Gathering on the Green was held a second time, this time with a broader focus on acceptance of all cultures and the goal of equality for all. 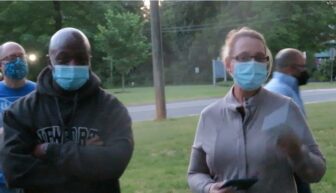 Carrie Lampley, right, started PEACHIE. She is standing with her husband, Brian, left, at A Peaceful Gathering on the Green Tuesday. Brian Lampley spoke at the event last year.

“We all stayed in touch after last year’s gathering,” she said. “It’s not just about police brutality, but other things: equality, diversity and inclusion with a focus on educating our own community.”

“This is who we are,” said Jennifer Aguilar, a town council member who introduced speakers Tuesday. “This is us coming together as a community and as a community we can stand with each other, learn from each other, love each other and accept each other. I honestly think Monroe is a beautiful, accepting community, but I’m not blind to the fact that more work needs to be done.”

Jason Maur, a fellow town council member, said there have been some positive changes, such as the Monroe Police Department and the Legislature working to include more officer training in deescalation and diversity, state legislation declaring racism a health crisis and Monroe planning its second annual Pride Flag raising on June 5.

But Maur also noted how the town has seen examples of bigotry, adding more work needs to be done. He said PEACHIE is a new movement.

“PEACHIE will concentrate on all forms of equality, including race, gender, age, economic and otherwise,” Maur said. “Please come join the conversation and become part of the solution.”

“It’s important for us to be here in solidarity for this great cause,” First Selectman Ken Kellogg said, thanking volunteers for organizing the gathering and the new community group.

The Rev. Jennifer M. Gingras, pastor of Monroe Congregational Church, led a prayer asking God for “the wisdom, courage and love to create a world where every person can breathe freely the air of equality, without fear or prejudice.”

Superintendent of Schools Joseph Kobza, who grew up in Monroe and graduated from Masuk High School, said he was struck by how much more diverse the community has become since he was a student.

“I think that’s an awesome thing,” Kobza said. “Our diversity makes us stronger and will continue to make us stronger. I’m proud of that.”

He also expressed pride in the work of the Board of Education to promote diversity in school curriculum, though Kobza conceded more can be done.

In English classes, Monroe’s public schools are striving to include more diverse authors and, while the state of Connecticut will require a black and Latinx curriculum next year, Kobza commended the Board of Education for approving a course called Diverse Voices in History in time for this year.

“It serves to highlight the achievements of a lot of folks who are kind of underscored in the traditional narrative of history,” Kobza said of the new course. 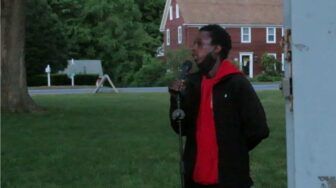 Sana Sarr shares experiences of his short time living in Monroe during A Gathering on the Green Tuesday.

Sana Sarr, who is originally from The Gambia in West Africa, is a longtime youth soccer coach in town. He had lived in Bridgeport before he and his wife bought a house on Camelot Drive in Monroe last October.

On Tuesday night, Sarr shared two stories of his experiences in town at the Peaceful Gathering on the Green — one good and one bad.

One day, when Sarr took a walk with his two sons, he recognized some boys he had coached who were playing in their yard, so he stopped to chat with them.

“I speak with them and all of a sudden a car pulls up, parks, a woman sticks her head out and yells, ‘boys, go inside,'” Sarr recalled. “The boys continue doing what they’re doing. I look at the lady and she says to me, ‘well, it’s dinner time. They need to go inside and have dinner.'”

“Maybe she is the neighborhood police, who goes around telling the kids to go inside, and maybe to other people that may not be significant,” Sarr told the crowd. “But with my background and, you know, history and everything I’ve dealt with in this country, I knew that there was more to it than somebody driving their car, stopping at every yard and saying to kids, ‘go inside.'”

Of a more positive experience, that did not start out that way, Sarr recalled waking up one winter morning to find his mailbox post broken in half and tossed aside and his garbage can knocked over, with trash on the street.

“I just moved into this neighborhood, and was probably the only one with my skin color on the street,” he said. “What’s going on?”

The police were called and an officer asked Sarr if he knew anyone who would do this to him. Sarr said maybe someone from another town. “In Monroe, I would expect someone to leave doughnuts or cake or a treat — not vandalism at my house,” he told the officer, making him laugh.

The police officer snapped photos at the scene and was about to leave, when they decided to look inside the mailbox. There was a note that said: Hey, I’m sorry. My car slid yesterday. It skidded. I lost control and that’s when I hit your mailbox and your garbage too.

The driver left his phone number. Sarr called him and the young man came by with his mother. When he saw Sarr fixing his mailbox, he called out, “Oh, Coach Sana!”

“It was somebody I coached,” Sarr said with a smile.

Sarr said he shared the contrasting stories to illustrate that incidents of racism do exist beyond what people see in the news. But he said people should not always jump to conclusions that an incident was racist or an example of something else that is happening in society,

At the same time, Sarr said people can’t dismiss every story they hear, while thinking the victims are making up stories or being overly suspicious or sensitive.