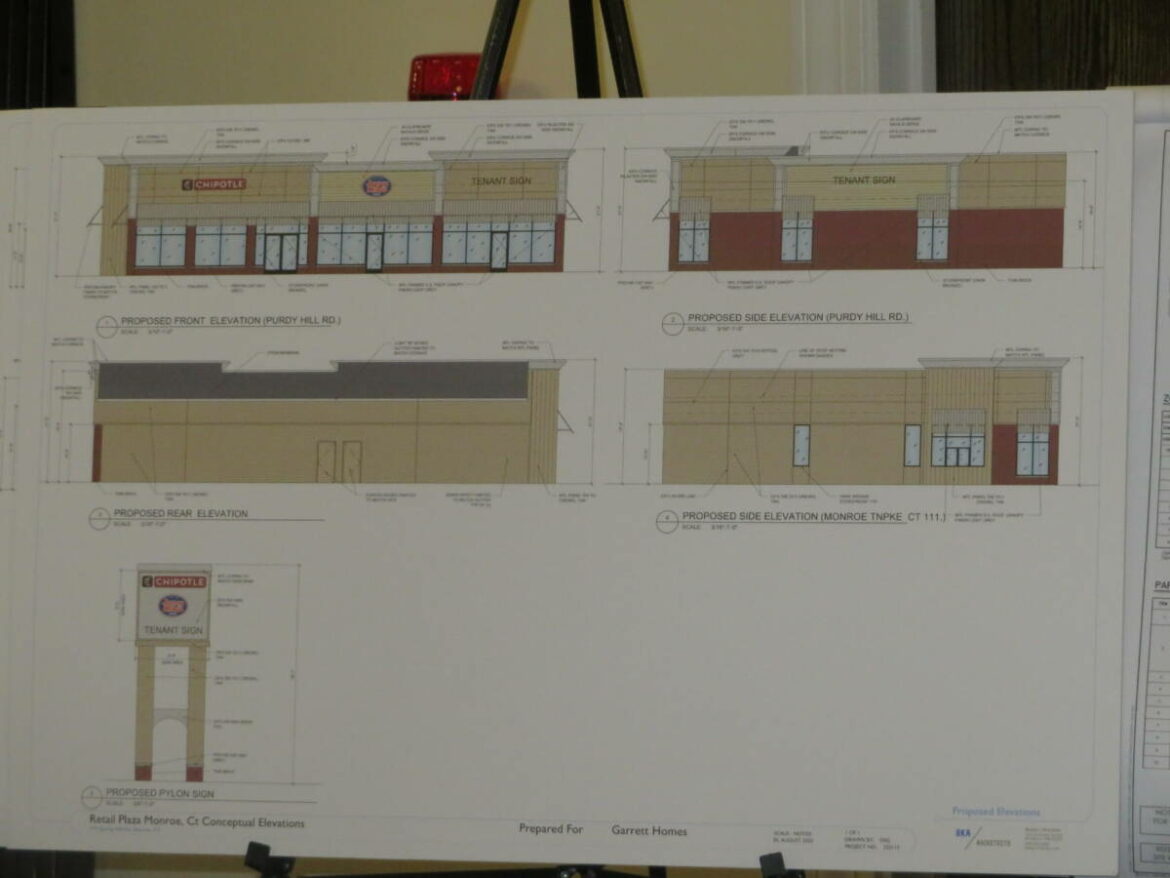 Architectural Review Board members expressed a more favorable view of this architectural design for a new commercial building on Purdy Hill Road.

Colors for Chipotle, Jersey Mike’s and a third tenant in the 5,320-square-foot building were different for brand identity. Chipotle was in repose grey, Jersey Mike’s in a darker Morris Room grey and the third space in a white hyacinth.

The Chipotle would have a drive-thru and there would be patio seating for the restaurant and Jersey Mike’s. The building would be built across the street from the Walgreen’s pharmacy on Monroe Turnpike.

At Tuesday’s ARB meeting, board members said they wanted something less boxy, with more character.

“The design seems very basic,” said Alayna Falco, a board member. “In order to fit in with the town of Monroe, can you do something to soften the building? We have the Goodwill across the street with a little more interest in it. We like Cape Cod, Victorian designs of buildings.”

Falco acknowledged how national chains strive for more modern building designs. “It’s not that it’s not great, but for Monroe it would be nice to see some more interest and softening,” she said. “Trying to make that strip more cohesive would be good for Monroe.”

“We went through this with McDonald’s,” said Cathleen Lindstrom, a board member. “New models are very sleek. It’s a trend, but we don’t want a box.”

Russo, who represented McDonald’s for its recent renovation, was prepared and had brought an alternative design to Tuesday’s meeting.

Matt Eucalitto of Garrett Homes, the developer, got up from the table inside the Monroe Town Hall Annex and walked up to a set of plans showing the Chipotle in a crewel tan, the Jersey Mike’s in a Navajo beige and the third space in a crewel tan.

“We drew up another one that’s a little different with a trim and a cornice,” he said, of the alternative design, which has red brick at the base.

The building would have vertical windows and a flat roof with a minimal slope.

Russo is with Russo & Rizio LLC, Attorneys at Law in Fairfield. The architect of the project is Douglas Grunert of BKA Architects, Inc., based in Brockton, Mass., and the engineer is Tim Houle of BL Companies, an Easthampton, Mass., firm.

Though the address is 375 Spring Hill Road, Town Planner Rick Schultz said access to the property, across the street from Walgreens pharmacy and Goodwill, would be from Purdy Hill Road.

On Tuesday, Schultz said he and Assessor Justin Feldman came up with a new address: 143 Purdy Hill Road, which would need approval from the Planning and Zoning Commission.

Grunert said the building’s materials are a mix of metal panel and stucco. Chipotle would have a set of double doors and the other two storefronts would have single doors. Each business would have an egress door in the back.

Lighting for the site would be Dark Sky complaint.

Traffic on the site 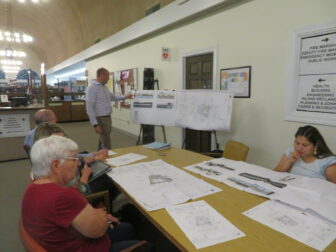 Douglas Grunert, an architect with BKA Architects, Inc., shows Architectural Review Board members the proposed design for a building on Purdy Hill Road with Chipotle, Jersey Mike’s and a third tenant during the board’s meeting at Town Hall Tuesday.

“It’s a site that does present some unique challenges, with frontage on Purdy Hill Road with the entrance and exit for this multi-tenant building, with some frontage on Monroe Turnpike,” Russo said.

Lindstrom said she wants to make sure the entrance is wide enough, so the driveway can accommodate SUVs and other large vehicles.

Russo said the driveway would be three lanes, 12 feet each, a total of 36 feet curb-to-curb. “That’s in general compliance with state regulations: one lane to go in, one straight and left and one right turn only,” he said.

The building would have 58 parking spaces, which Russo said meets Monroe’s minimum requirements.

A drive-thru would go around the back of the building and to the left side, where the Chipotle would be. Russo said it would be online ordering only, with pick up at the window.

The drive-thru would have two lanes, allowing those who forgot their wallet, or did not know it is mobile order only, a means to get out of line. Russo also said the outside lane would accommodate emergency vehicles.

“So there’s no merge like McDonald’s,” William Holsworth, the town’s director of Economic & Community Development, said.

“With the apps, people are ordering online,” Schultz said. “It’s the sign of the times.”

If an order is not ready, Houle said there would be three open spots for drivers to park and wait for their food to be brought out to them, without holding up the drive-thru.

The building would have awnings and Eucalitto said the patios could be made with stamped concrete. He said the umbrellas are generally a solid black or red, without advertising on it.

There would be onsite sewage and a propane tank would be buried. Grunert said the mechanicals on the roof would not be visible from the front of the building, but could be seen from the back.

Lindstrom asked Schultz if it is common for mechanicals to be visible from the back of a building. He said it is, but screening can be done if it is visible to neighbors.

The minimum lot frontage is 150 feet, but this building would be setback 289 feet.

The landscaping plan includes rows of lower growing shrubs in front of the parking lot coming in from Purdy Hill Road to soften the parking lot and the building behind it, according to Houle.

Houle said some trees would be planted in strategic locations along the driveway and on islands. Varieties proposed include Autumn Blaze Maple and Japanese Zelkova.

Grass and shrubs are proposed against the building with more plantings on an island between the two patios.

The developer will keep an existing stonewall and maintain as much of the existing tree line behind the property and on the Spring Hill Road side as possible, according to Houle.

Schultz said he showed the neighbors the buffer and they were pleased.

Holsworth noted how signage for the building would face Purdy Hill Road, which is a secondary road, rather than Monroe Turnpike, which is a primary artery. He said the developer may want to consider proposing signage on Route 111.

Holsworth also asked the developer if he considered taking advantage of incentives to add electric vehicle charging stations to the site, adding the owner could charge drivers who use it to pay for it.

“We haven’t considered that,” Eucalitto said. “We’ll talk to people to see if there are good spots for it or not.”

Eucalitto said the third tenant will “probably be a national chain, someone who will be there a long time.”

He will need a site plan approval for the new building from the Planning and Zoning Commission. Schultz said there are no wetlands on the property.

“We’d like to start by October, early November, and be ready by spring,” Eucalitto said of the construction schedule.

Overall, the ARB seemed pleased with the architectural plan.

“I think plan B is going to be okay,” Lindstrom said.

2 thoughts on “A Chipotle building design? ARB members opt for Plan B”