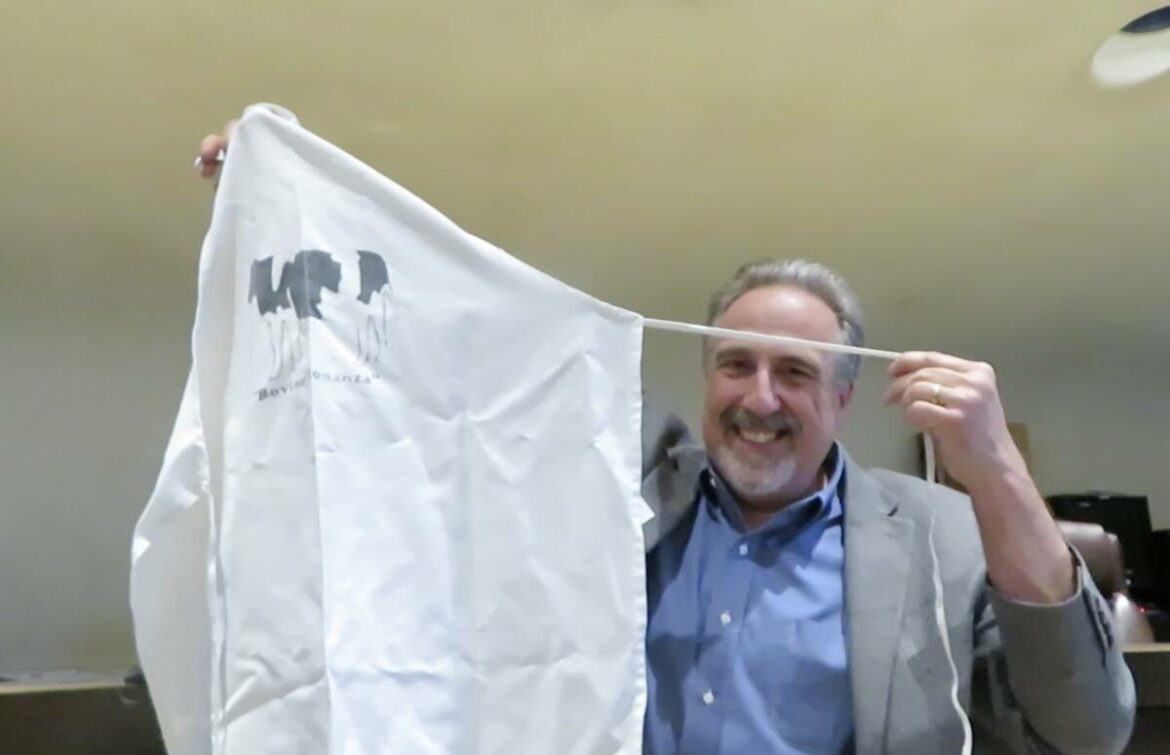 Michael Ganino, vice chairman of the Monroe Playground Foundation, holds up the first item pulled from a 30-year-old time capsule Tuesday: an apron with the phrase "Bovine Bonanza".

This story is dedicated to the memory of late Kids Kreations Playground building committee members Carol Wright and Bill Reilly.

MONROE, CT — A crowd surrounded a time capsule on the floor inside Town Hall’s Council Chambers Tuesday evening. It had been buried at the construction site for the Kids Kreations Playground at Wolfe Park 30 years ago, and curious onlookers attending Tuesday’s unveiling ceremony — in-person and via livestream — were eager to see its contents.

Keith Romano, who is doing the site work for the new playground, wielded a hand tamper, which he used to crack open one end of the capsule. 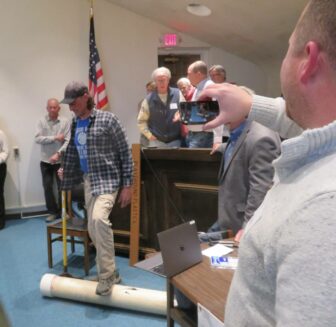 Keith Romano uses a hand tamper to crack open a 30-year-old time capsule that was buried at the construction site for Kids Kreations Playground at Wolfe Park in 1992.

The white capsule with children’s names scrawled on the outside was lifted up onto a table in front of the dais, where Michael Ganino, vice chairman of the Monroe Playground Foundation, the nonprofit building the new Wolfe’s Den Playground, reached inside …

The first item he pulled out was a white apron with a cow print on it. Beneath it was the phrase, “Bovine Bonanza.”

Most of the contents consisted of 1992 drawings and notes from school children. Ganino held up one drawing by Scott Coventry of volunteers washing nails for the playground.

“This is from Jessica Shaw,” Ganino said, holding one child’s letter. “‘Thank you for helping build Kids Kreation. Kids of Monroe will play on it for years. Wolfe Park will be a happier place because of all you did.'” 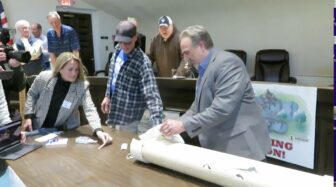 Alice Pulliam, left, and Keith Romano stand at the table while Michael Ganino, right, vice chairman of the Monroe Playground Foundation, pulls contents out of the time capsule.

Ganino held up drawings and photos and read letters aloud. There was occasional laughter and excitement when a familiar name was heard.

One boy wrote a letter saying he was going to be a police officer when he grew up. He would be 6-foot-4, live in Stratford and have four kids, who he would take to the playground.

Contents of the capsule also included giant posters children had made and an old issue of the Monroe Courier, the town’s hometown newspaper, which was shuttered in October of 2018. 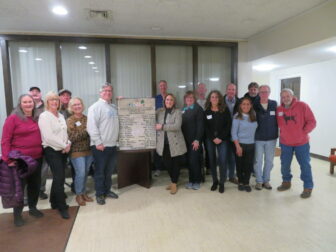 Members of the 1992 Kids Kreations Playground building committee pose with the restored plaque engraved with their names.

Dan Keene, chairman of the Monroe Playground Foundation, said a push is underway to raise the remaining $60,000 needed for The Wolfe’s Den Playground project, which will be built where the old wooden playground once stood.

Volunteers will be needed for a community build, scheduled for May 10. Aside from the excitement of the opening of the capsule, Tuesday night’s event was a recruiting effort.

Two members of the original 1992 building committee died over the years, Carol Wright and Bill Reilly. Of the 18 surviving members, 15 attended Tuesday’s event. Alice Pulliam, who was the committee chair, encouraged fellow members to volunteer as a group of alums.

A volunteer plaque listing the names of the Kids Kreations building committee was recovered when the playground was taken down. Pulliam restored it,  and the plaque will be displayed at The Wolfe’s Den. 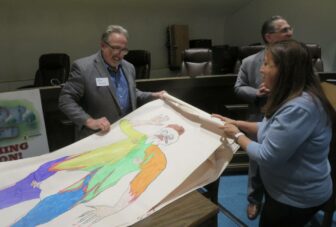 Michael Ganino, left, and another volunteer unfurl a giant poster that was stored inside the time capsule at Wolfe Park for 30 years.

Keene said the restored plaque and some pieces of the old playground will be part of a display to memorialize Kids Kreations.

He asked the original committee members to stand up for a round of applause. Then the current volunteers received a standing ovation. 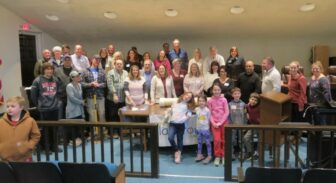 Members of building committees for the Kids Kreation playground, built in 1992, and volunteers for The Wolfe’s Den, which will replace it, pose for a group photo at Monroe Town Hall Tuesday.

“This was truly a project of love,” Pulliam recalled. “Hundreds of hours of dedication, thousands of hours on the phone. We didn’t have the internet,” she added, as laughter filled the room.

Original building committee members said they were touched by the way volunteers chose to honor their past efforts.

“How incredibly kind of them to include us, Pulliam said, “because it’s such an emotional experience for all of us.”

“That they will put that sign up means so much to us,” Jeanne Puglisi, another 1992 committee member, added.

Marie D’Ostilio said the Kids Kreations Playground project came about from a playgroup she was part of with other mothers, whose children were enrolled at Kiddie Campus, a preschool at United Methodist Church.

D’Ostilio, Pulliam, Nancy Pompa, Alice Berry and Nancy Reilly took their kids to the playground at Dickinson Park in Newtown.

“We thought, ‘wouldn’t it be nice to have one of our own?'” D’Ostilio recalled. 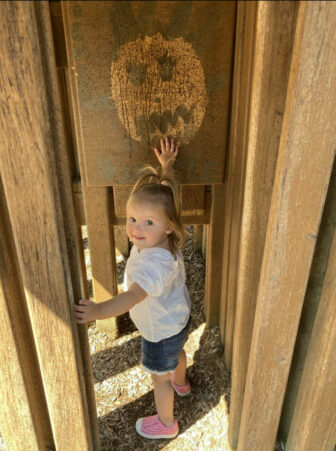 Reagan Carleton, 2, touches a painting her mother, Danielle, made when she was a little girl playing at Kids Kreations Playground at Wolfe Park. Soon she will be able to play at The Wolfe’s Den.

Danielle Carleton was five-years-old and her little brother was three when their mother, Nancy Pompa, served as fundraising chair for the 1992 building committee. They were young enough to play at the Kids Kreations Playground.

When Carleton was a little girl, she painted a face on a tower near the middle of the playground. She has a photo of her daughter touching it.

Reagan is also young enough to play at The Wolfe’s Den Playground once it is built.

“It’s definitely surreal to see something my parents created and have something my daughter can enjoy,” Carleton said. “When she’s little, she can relive my childhood, basically.”

Crista Whiteman, of Monroe, was age four when Kids Kreations was built. “I have an eight-year-old son, Camden,” she said. “He’s looking forward to the new one.”