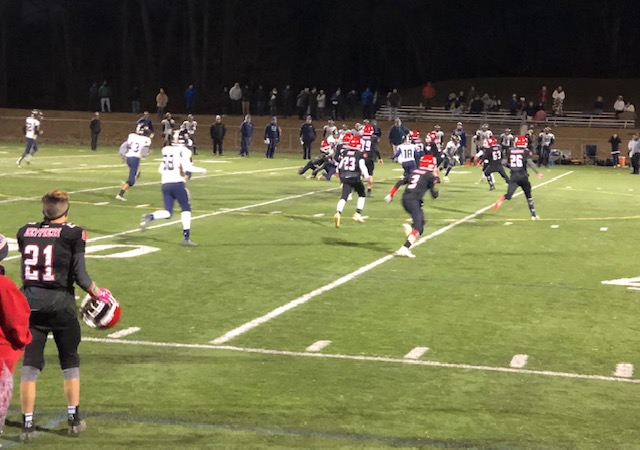 The Lions led three times in the first half, before falling to Newtown 52-24. Contributed

The Lions eighth grade team fought their way to the Shoreline Conference Bowl Championship game after winning only one game a year ago and Monroe had three leads in a see-saw battle in the first half, before the magic ran out on its Cinderella run. The Lions fell to the Newtown Knights 52-24 on Saturday, Nov. 16.

Despite the cold weather in Newington, the Lions got off to a hot start when Colin Hope  took the opening kickoff and returned it over 60 yards for a touchdown. Kicker, Matt Zeppieri, made the two-point conversion putting the Lions up 8-0.

Head Coach Joe Kobza hoped that would set the tone for the game, but Newtown answered right away, returning the ensuing kickoff for a score before a two-point kick knotted the game at 8-8.

Midway through the first quarter, Jason Champagne took a handoff from quarterback Rob Klein and fought off a pack of Newtown Knights en route to a touchdown run. Zeppieri’s kick put the Lions ahead once again,  16-8.

The stubborn Knights responded, this time scoring on a long pass and kicking the two-point conversion to tie the score at 16 at the end of the first quarter.

Newtown would take a 22-16 lead on a touchdown early in the second quarter, but with only two minutes left in the half, Colin Hope’s scoring run tied the game at 22-22. Zeppieri booted the ball through the uprights to give Monroe it’s third lead of the game, 24-22. 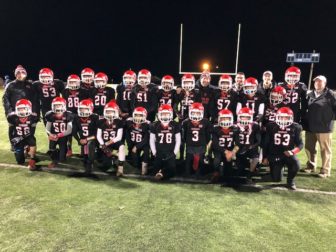 The eighth grade Lions team had a great season. Contributed

But it was all Newtown after that. The Knights regained the lead just before the half with a touchdown run and two-point kick.

Down 30-24 at the start of the second half, the Lions could not regain their momentum and were outscored 22-0 the rest of the way.

But Monroe had a tremendous turnaround over the past two years, going from only one win to earning a second place finish in the Shoreline Youth Football Conference.