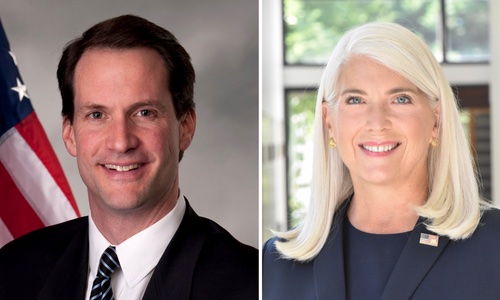 U.S. Rep. Jim Himes, D-4th Connecticut, is campaigning for another term in Congress. He faces a challenge from former Darien first selectman, Jayme Stevenson, a Republican who is also running on the Independent Party line.

Both candidates agreed to answer several questions on the issues from The Sun, which will be run as separate articles leading to Election Day on Nov. 8.

If someone in Congress proposes a bill to make abortion illegal nationwide, where
would you stand?

Stevenson: As a woman and a mother of five (including four daughters), I want these decisions to be made by a woman in conjunction with her doctor, and, if she so desires, her family and her God. There is nothing more personal than healthcare decisions. The government is inserting itself in a patient-doctor relationship and invoking control over a woman’s body.

I do however believe that abortion procedures are done safely with certified, qualified
medical professions and that young girls under the age of 18 should have the support of a caring adult for this medical and emotional experience.

Congress, for decades including the 14 years my opponent has served, has failed to
codify Roe v. Wade when it had a chance. Members of Congress instead weaponized the
issue to raise money and scare voters rather than working to secure the rights of women.

As a woman, I know we cannot afford to take these rights for granted. Even if it means
standing up to my own party, I will fight to ensure that abortion is safe, legal, and done
with the support of qualified medical professionals.

We are lucky that Connecticut remains a haven for those in need of critical healthcare services, but it is heartbreaking that so many Americans have been stripped of this fundamental right. As long as I am in Congress, I will keep fighting to preserve a woman’s right to make her own reproductive decisions.