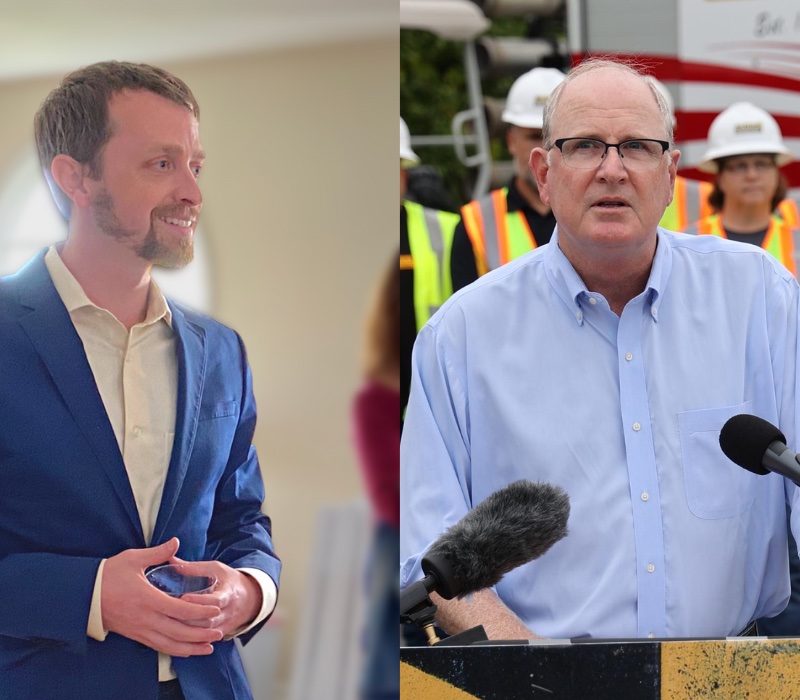 State Sen. Kevin Kelly, R-21st, has been active of late, attending events for Construction Appreciate Week and a World Alzheimer’s Awareness Month Press Conference. Meanwhile, his challenger, Democrat, Christopher Green penned a letter inviting the incumbent Republican to a debate on the issues.

The Monroe Sun compiled the letter and press releases from both candidates vying for the state senatorial district representing Stratford, Shelton, Seymour and Monroe.

One thing I have learned from knocking on thousands of doors and talking to hundreds of voters is that, despite the popular narratives in the media and on social media about increasing political divides, many of us fall somewhere in the middle. Residents love our state, but they see things that should be changed. They see room for improvement across both sides of the aisle. They want solutions and compromises, not mud-slinging and gridlock.

Most voters also want to make informed decisions with their vote; they understand who they elect impacts the quality of their lives. But with all the different levels of government, it can be difficult to keep up with who your state legislators are — let alone how they voted or where they
stand on key issues.

My name is Chris Green and I’m running for State Senate in the 21st District encompassing Shelton, most of Stratford, and parts of Seymour and Monroe. I’m running against State Sen. Kevin Kelly. While we have some common ground, there are important differences in our beliefs.

More than ever, it is important for public servants and political figures to embrace transparency and lead by example to show that this country has a path towards a brighter future through lively but respectful public discourse. I sent Sen. Kelly an email on September 2nd inviting him privately to work with me to arrange for this opportunity. As I haven’t heard back, I am making the same plea now, publicly.

Dialogue is the foundation of democracy. I invite Sen. Kelly to reach me at
[email protected] so we can work together to create an opportunity for the voters to make an informed choice on November 8th. Voters can find more information about my campaign at www.cgreen4senate.com.

Kelly on the trail 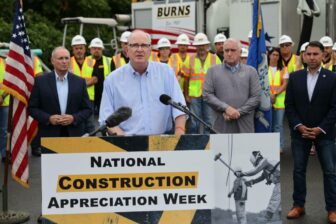 Sen. Kevin Kelly, the Senate Republican Leader, participated in a press conference with the Southwestern Connecticut Agency on Aging, service providers, advocates, and those living with Alzheimer’s Disease at Sunset Shores Adult Day Center in Stratford on Thursday, Sept. 22.

The event is meant to heighten awareness about Alzheimer’s disease and show support for the more than 6.2 million Americans living with it during World Alzheimer’s Awareness Month.

“Today we gather to recognize and thank the workers who construct the buildings in which we live, work and play; our roads and bridges that take us safely where we need to go; and the communications infrastructure that connects us all,” Kelly said.

“We can and must do all that we can to continue supporting the construction industry and the thousands of jobs it creates here in Connecticut,” he continued. “From strengthening workforce development to ensuring federal infrastructure dollars are invested in transparent, accountable, and transformative ways, there is more work that lies ahead to grow this workforce. Thank you to every worker who supports construction across our state.”

In Hartford, Kelly and House Republican Leader Vincent Candelora, R-North Branford, submitted petitions to the Secretary of the State’s Office calling for a special session to restore home heating oil assistance slashed by Washington to seniors and low income families, as well as expand relief to middle class families.

The legislators said they have been fighting to restore assistance to seniors and families who face significant cuts to home heating relief through the Low Income Home Energy Assistance Program (LIHEAP) as a result of Washington cutting state assistance. They have sought to increase assistance, calling for a special session in June, offering a committee level amendment to restore funding, before petitioning for a special session.

“Washington’s dysfunction has failed Connecticut seniors and our most vulnerable residents,” Kelly said. “Inflation is creating new hardships for middle class families unlike anything we’ve seen before. Good government works to solve these problems, not wait for people to feel the cold creeping into their homes before taking action.” 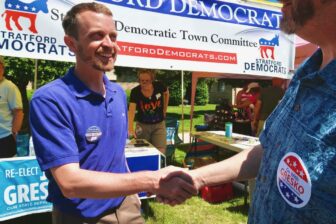 Christopher Green was endorsed by the Connecticut American Federation of Labor and Congress of Industrial Organizations (AFL-CIO).

“I am proud to be supported by the AFL-CIO, an organization that works tirelessly to protect the rights of their workers and all workers across the country,” Green said. “As a candidate, I unequivocally stand behind the rights of workers to organize to negotiate for fair compensation, benefits and working conditions.”

The Connecticut AFL-CIO is a federation of hundreds of local unions representing more than 200,000 active union members in the private sector, public sector and building trades.

“I am proud to live in a state that has supported workers and working class families by creating a paid leave program, is pushing the minimum wage toward a living wage and has banned captive audience meetings,” Green said, noting that his opponent voted against all three of these issues.

The minimum wage increase to $14 an hour and the ban on captive audience meetings both are going into effect July 1st. Green was one of 16 State Senate candidates in Connecticut to earn the endorsement. Gov. Ned Lamont and Sen. Richard Blumenthal were also among those endorsed.

“Now through November I am committed to working hard to get elected so I can continue to push for Connecticut to be a leader in taking care of its workers and their families,” Green said. 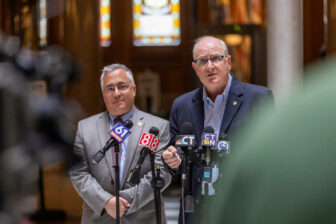 Kelly recently received the endorsement of the Connecticut State Fraternal Order of Police.

“I first must thank the brave men and women who work hard every day to make our communities safe. Thank you for putting others before yourself and helping us all during our greatest times of need,” Kelly said.

“Everyone deserves to live in a state where you and your family feel safe,” he said. “Safe walking down the street, driving in their car, or sleeping in their homes. I know far too many who do not feel safe today, and Connecticut must do more to not only respond to crime by addressing the symptoms, but to address the root causes of crime.”

“I’ve worked with law enforcement, youth advocates, community leaders, and public defenders to develop a holistic approach to address crime, justice, and opportunity,” Kelly said. “I will continue to fight for solutions that not only ensure law enforcement and our justice system have the tools they need to keep all people safe, but that also strive to end the cycle of juvenile injustice and a lack of opportunity that pushes people, especially young people, towards crime.”

Sen. Kelly was informed of his endorsement in a letter from Det. Sgt. John Krupinsky, president of the Connecticut State Fraternal Order of Police.

“It is with great honor that the Connecticut State Fraternal Order of Police announces that it has endorsed you for this upcoming election,” Krupinsky said. “There is no doubt that you will put the best interests of Law Enforcement and your constituents first. I believe you are the best candidate to move the safety and security of this state forward.”