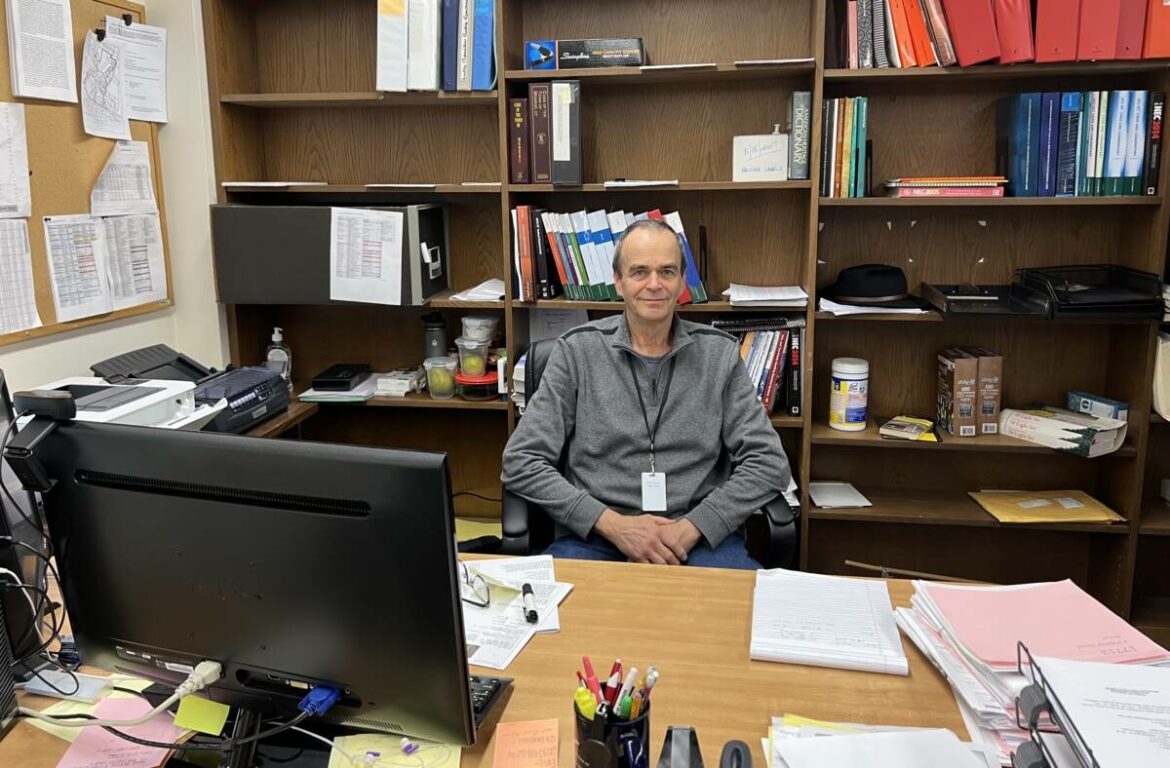 MONROE, CT — John J. Morris Jr., 66, has gone to building departments and waited for inspectors to arrive at job sites, while working as a contractor for decades. But for the past few years, he found himself standing on the other side of the counter.

Morris started his new career in Meriden in 2019, before being hired as Monroe’s new chief building official on Sept. 26.

“I love working with the people,” he said during an interview at Monroe Town Hall Tuesday. “I love going out and meeting the contractors. I’ve been doing the trades all my life.”

Though town officials cannot tell contractors what to do, Morris said he can give guidance on ways builders can follow the codes.

“I love when they say, ‘what do you want me to do?’ It’s not me. It’s the code,” he said with a smile. “I enjoy spirited conversations with the contractors.”

Morris said he also likes talking to homeowners about their projects.

Morris, who last worked as chief building official of Meriden, lives in Brookfield with Arlene, his wife of 39 years. The couple has two grown children, Christopher and Rachel.

Morris grew up in Stamford, where he graduated from St. Basil’s College Preparatory School. He went on to study business, but ended up going into construction. He worked in the field since 1978, eventually starting his own business, Morris Construction Co. in Brookfield, which he ran for decades.

His company started out building houses, before adding commercial development to its portfolio, doing retrofits — primarily for medical offices.

During his career in construction, Morris found relationships are just as important as using the right materials for the job. For example, he took the time to learn the building codes to ensure inspections by the local building inspectors went smoothly.

Demy Parpana Jr., Brookfield’s building official, got to know Morris well over their 18 years of interactions and when a class was coming up for aspiring building inspectors, he issued a challenge to Morris.

“You know it all. Take the class and take the test,” Morris recalls Parpana telling him.

Morris said his wife had wanted him to do something different for a long time, so he decided to enroll in the course.

Aside from a week off for Christmas, Morris attended classes at Rocky Hill Firehouse from 8 a.m. to 4 p.m. every Tuesday and Thursday, from Sept. 6 to May 15, the week of the test.

Morris applied for an opening as a building inspector for the city of Meriden and landed the job.

“I told my wife, ‘it’s a good fit,'” Morris recalled. “I liked the people I met. I liked walking in the building. Everything felt right.”

When Meriden’s building official left for another opportunity, the city asked Morris to serve as the interim head of the department, because he was good with people, Morris recalled.

When the next building official left in less than a year, Morris was asked to serve as interim again, but this time he refused. Morris wanted the position full-time.

“I knew the system, the building and the people,” he said.

On February 2, 2022, the city hired Morris as its new building official.

Morris said his commute to Monroe Town Hall is 20 minutes vs. an hour drive to Meriden.

“That’s saving roughly 10 hours a week,” he said of driving back and forth. Of Monroe, he said, “it’s very similar to Brookfield. It’s residential and you have commercial strips. In Brookfield it’s Route 7. It was like going home again.”

“I look forward to working with our new chief building official,” Town Planner Rick Schultz said. “He has settled in nicely with his department and will be an asset to the town.”

“I’m extremely happy to have John on board,” First Selectman Ken Kellogg said. “We had significant staffing issues in our Building Department that had caused delays and frustrations. The pool of state-licensed building officials has diminished, and like other communities facing retirements this created recruitment challenges.”

“Whereas previously I had brought in building officials from other towns to help out by working in Monroe on evenings and weekends, we now have a great, new team in place,” Kellogg said. “John is a welcome addition to lead our Building Department. He has hit the ground running, has addressed all of the previous backlog, and has taken steps to improve procedures to get things done more efficiently. He has not only the knowledge and experience, but I think our customers will find him to be someone who is very approachable.”

With most building departments, Morris said inspectors give contractors a window between 10 a.m. and noon to meet for an inspection.

“Then they sit there two hours,” Morris said of contractors being tied up, waiting for an inspection. “We’ve got it down to a half hour window.”

When a residential or commercial job includes pouring concrete, Morris said he will stop by to do the inspection at 8:30 a.m., while on his way to the office, so the work is not delayed.

He said inspections are typically between 8:30 or 9 a.m. and 12:30 p.m. Then it’s back to the office at Town Hall to answer phone calls and help people who come in. On Tuesday afternoon, Morris worked on a half dozen solar permits.

Since Morris began working in Monroe, he said the department started using an Outlook calendar, rather than scheduling appointments long-hand, making it easier to keep track of things.

An improvement was also made to speed up the issuing of building permits for roofing, siding and replacement windows.

Morris said the building official used to have to review and sign off on each permit, leading to tall stacks of pending applications.

But now, if the applicant comes in with a complete application, has Home Improvement Contractor (HIC) registration, a certificate of insurance and a proper description of the project, Administrative Assistant Amanda Donaghey can issue the permit.

Morris said this enables people to receive a permit within two days, if not on the same day they visit. “We showed her what she needs to type on the permit, so she can approve it on my behalf,” he said of Donaghey.

Morris said he’s enjoying the work and the people in Monroe.