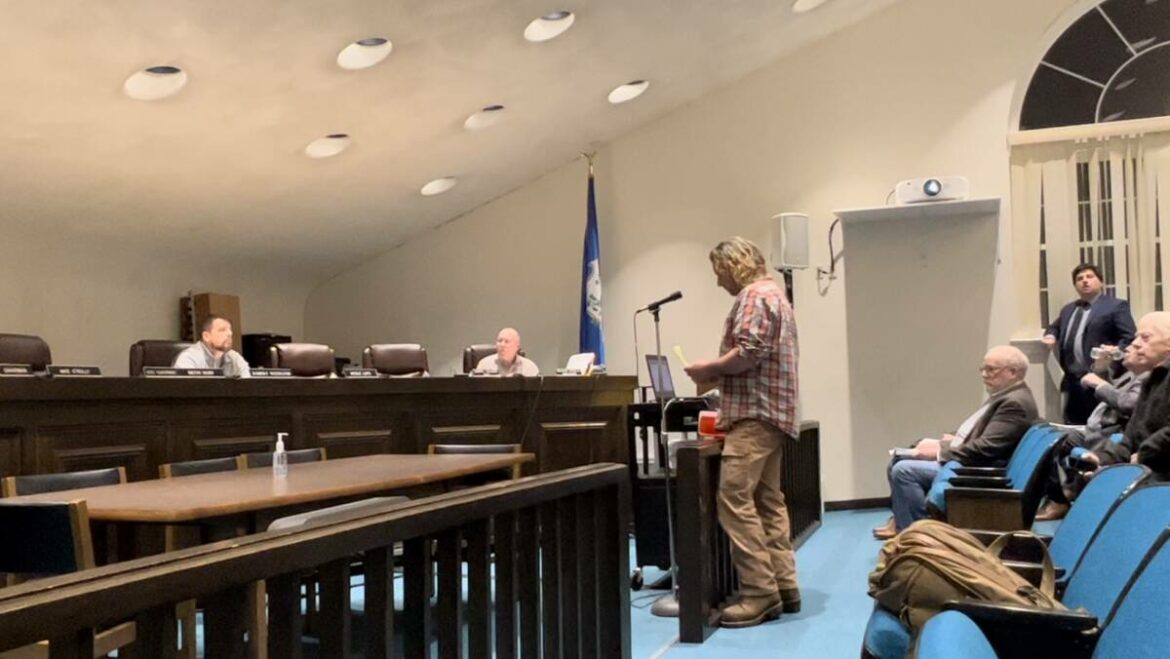 MONROE, CT — A foreclosure sale looms for Jason DuBac’s late parents’ property at 373 Spring Hill Road, on a portion of the street recently abandoned by the town, but the potential heir is not ready to give up on the chance to acquire it, nor on his fight against the road closure.

DuBac, who says the sale has been delayed, also wants to have a voice in the town’s decision to close that section of the roadway, which has a dead end near Route 111. DuBac took a road trip from Vermont, arriving at his childhood home on a rainy Thursday morning. His sister allowed him to walk the property ahead of the sale.

A brown raised ranch with three bedrooms stands on the 1.4-acre-property. As of Nov. 9, 2021, $276,628 was owed on the mortgage, plus accruing interest, fees and legal costs, according to a lawsuit brought by American Advisors Group to foreclose on the property.

“The land looks better than I remember and the house looks structurally sound,” DuBac said. “If I buy it, I’ll keep it myself.”

However, if the property is lost to foreclosure and there is any money left over in his parents’ estate to split between he and his sister, DuBac said he will donate all of his inheritance to charity.

“I don’t want their money,” said DuBac, who was long estranged from his parents. “It’s poison to me.”

DuBac said he would donate all of the money to Trina & Friends K-9 Rescue in New Rochelle, N.Y., where he adopted his German shepherd.

The Town Council recently voted to abandon that section of Spring Hill Road, allowing a developer to build a restaurant, or another potential business, on an expanded parcel at the corner lot at 255 Monroe Turnpike. Currently, a white boarded up house is there.

DuBac said he believes lost road frontage and being across from a business will have a negative impact on the property value of 373 Spring Hill Road.

He is upset that he was not notified about the proceedings when the town was deciding to abandon that section of roadway. But First Selectman Ken Kellogg told The Sun that DuBac is not listed as the owner of 373 Spring Hill Road on the latest grand list, so he did not have to be notified of the proceedings to abandon the road.

This position is backed up by the town’s attorney, Vincent Marino.

John DuBac died in 2017 and his wife, Elsie, died in 2020, but since then a family lawyer did not ensure legal paperwork was updated to show Jason DuBac and his sister as the new owners. The property is still in their late parents’ names.

The Probate Court in Trumbull told The Sun Elsie DuBac’s estate is still open. However, Jason DuBac’s father’s will is on file there and it shows his intention for all of his property and assets to be split equally between his two children, should his wife die before him.

Though he does not have standing as the current owner of the property at 373 Spring Hill Road, DuBac is attempting to poke holes in the town’s process of abandoning a portion of the road, to make officials restart it, so he can be included in the conversation before a re-vote.

On Thursday night, he spoke during the public comments portion of the Planning and Zoning Commission’s meeting inside the Town Council Chambers. He also intends to speak at this Monday’s Town Council meeting.

DuBac told the commission he is a legal heir of his late parents’ property, who has questions and concerns over the road closure. DuBac said he first learned about the issue when a friend shared a Monroe Sun article on Facebook on the week of Jan. 10.

“I’m disappointed I wasn’t contacted in this process,” he said. “I have been told this is Town Attorney Vin Marino’s opinion, that all the abutters were properly contacted. I disagree.”

From the record, DuBac gave the commission a letter from his sister, SueEllen DuBac, that read:

To Whom it May Concern,

We are in support of the Spring Hill Road discontinuance.

Though Suellen and Jason DuBac are listed as heirs in their late father’s will, neither is currently listed as owner of the property on the grand list.

Jason DuBac told commissioners that the record shows the town of Monroe sent out a certified notification to his “long dead parents” on Dec. 6, 2022.

“It was never signed and it was entered Jan. 13 2023 still unsigned,” he said. “I believe this was an unprofessional, futile attempt to contact the bare minimum of living people in order to rezone a property. This is still my opinion. Now actual facts.”

“I’d like to let the board know that you were not presented all of the facts or truths and were actually misinformed,” he said.

DuBac said he watched the YouTube video of the Monroe Planning and Zoning Commission’s July 7, 2022 meeting, when Town Planner Rick Schultz told commissioners the dead end portion of Spring Hill Road was never connected to Route 111 and that this commission never saw a need to connect it in the future.

DuBac said he believes his family’s portion of the street was connected to Route 111 as a through road when, around 1993, the town disconnected it and made it a dead end street, then reconnected Spring Hill Road to Route 111 at a different area, adding a traffic light.

“Would the board have recommended this part of Spring Hill Road to be discontinued for the second time had they known this?” DuBac asked. “This property had approximately 150 feet of road frontage and a dead end nearby. Due to this road closure, it will now be an interior lot, way less desirable and heavily devalued.”

“I am fighting for fairness and transparency,” DuBac said. “This process was started with a misinformed board.”

He asked the commission to review and fact check the history of the street, to rescind its municipal referral and start the informative process again.

Commissioners do not have to issue responses to things said in public comments and nobody did on Thursday.