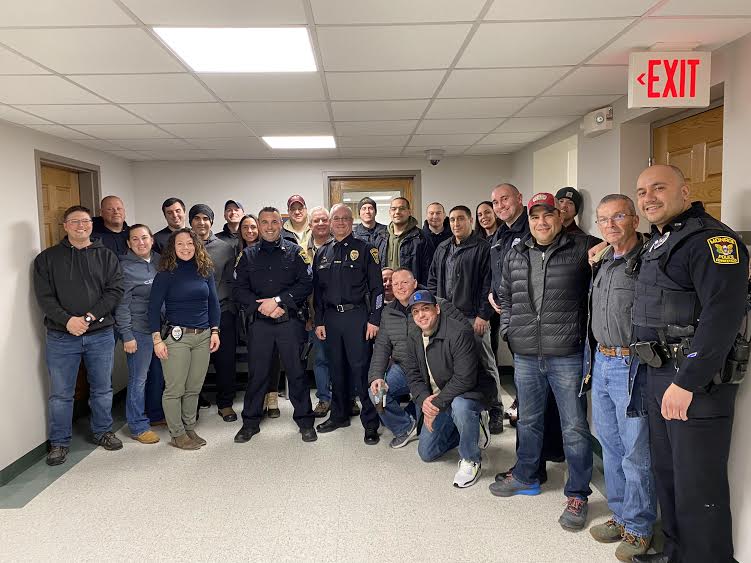 Police Capt. Keith White, standing to the left of the officers on one knee, enjoys the support of his colleagues after the Police Commission voted to offer him the position of police chief. White would be Monroe's fifth chief.

MONROE, CT — John Salvatore’s career as Monroe’s longtime police chief will soon come to an end with his pending retirement, and Monroe’s Board of Police Commissioners decided to look from within to find a new chief to step into the role and lead the town’s department into the future.

On Tuesday night, commissioners unanimously agreed to offer the job to Police Capt. Keith White, a 27-year veteran of the department who also serves as the town’s emergency management director.

Many local police officers attended the special meeting and reportedly gave White a standing ovation after the vote.

“I am honored to have been chosen and have the ability to finish my career here,” White said Wednesday. “I look forward to continuing to work for the town of Monroe in this new role.”

Though the commission offered White the position, he still must agree to terms of a contract with the town before the hiring becomes official.

“It will be completely seamless,” Salvatore said of a transition to White. “He has knowledge of every aspect of this police department’s operations. When I became chief, he was a detective, and he was the primary person I relied on in the Detective Bureau — and he continued to be a person we could always rely on no matter what rank or what assignment he had. I feel confident he will certainly be the same type of person in the role of police chief.”

Salvatore was hired as the fourth police chief in Monroe’s history in 1998, succeeding Robert Wesche. White had joined the department as a patrolman on Feb. 1, 1995.

Kellogg said the commission decided to see if there was a qualified internal candidate, before looking outside the department.

“Being part of the interview process and having worked with Keith since taking office, not only in his role as second in command but also in emergency management, I’m extremely pleased with the Police Commission’s decision,” Kellogg said. “I think they made an outstanding selection.”

“It’s good to see we have someone, who without question is highly respected,” the first selectman added. “He has risen from the ranks and has been here since 1995. His connections to this community, his loyalty to the department is incredible.”

Kellogg estimated that half of the Monroe police department attended the meeting, applauding the commission’s decision to offer White the job.

“It was a good turnout last night,” Vitello said. “A lot of police officers were there to give him support. Everybody’s excited.”

Though there are others who are also qualified within the Monroe Police Department, White was the only candidate who came forward, according to Vitello.

“It’s all based on the credentials, experience, your background and education,” Vitello said. “After the interview and reviewing his resume, he was very qualified to move forward as the next police chief of the town of Monroe, which I think will be an asset for Monroe and the townspeople.”

Vitello said White rose through the ranks in the Monroe Police Department over the years and knows all of the officers.

“I think it’s a great thing to promote from within instead of going out and doing a regional search when you have someone who’s very qualified within the department,” Vitello said. “It’s nice to see them with all their hard work, and being in the department a long time, to become the next chief of the Monroe Police Department.”

Deak and Villani served on the commission back when Salvatore was hired as chief. Deak said he wanted to conduct a search internally and externally as they did in 1998.

“It’s good not just to look inside, but outside as well,” Deak said. “I expressed that interest, but all of the other commissioners overruled me. We interviewed Keith and I have no doubt he’ll do a very good job, and he’s very well qualified.”

During the interview, Deak recalled White’s mention of having a lot of institutional experience.

“That’s pretty impressive,” Deak said of White’s career. “He’s very good. He’s a good person. He’s very well qualified. He has a lot of years in the town. He’s obviously experienced a lot of support among his fellow officers. Somewhere in excess of 15 officers where there to support him Tuesday night. It speaks well. We look forward to having him as chief.”

Deak also said it is sad to see Salvatore go. “He’s one of the longer tenured chiefs and he did an excellent job, sometimes under difficult conditions,” he said.

Salvatore’s last day on the job will be Feb. 25 and town leaders hope White will have a contract in place and be ready to take over on Feb. 26.

Kellogg said he will work with Craig Hirsch and Town Attorney Frank Lieto in crafting a contract. The contract will be reviewed by the Police Commission and if all parties agree, the Town Council’s Legislative and Administrative Committee will vet it and make a recommendation to the full Council for a vote.

Though the commission only conducted an internal search, Hunsberger said there was no compromising on the qualities and qualifications a new chief must have. He said White fulfilled all of those requirements.

After the tragic Sandy Hook Elementary School shooting in 2012, White organized town resources and helped the faculty and students transition to holding classes at Chalk Hill in Monroe. Hunsberger also noted how much White has done in setting up operations for town measures in its response to the COVID-19 pandemic.

“He was highly recommended by Chief Salvatore,” Hunsberger said. “It was really a no brainer in my mind after listening to him, knowing his qualifications and observing what he did for the town. I think it would be an insult to go outside the town after all he has done — to say, ‘we don’t want you to step up.'”