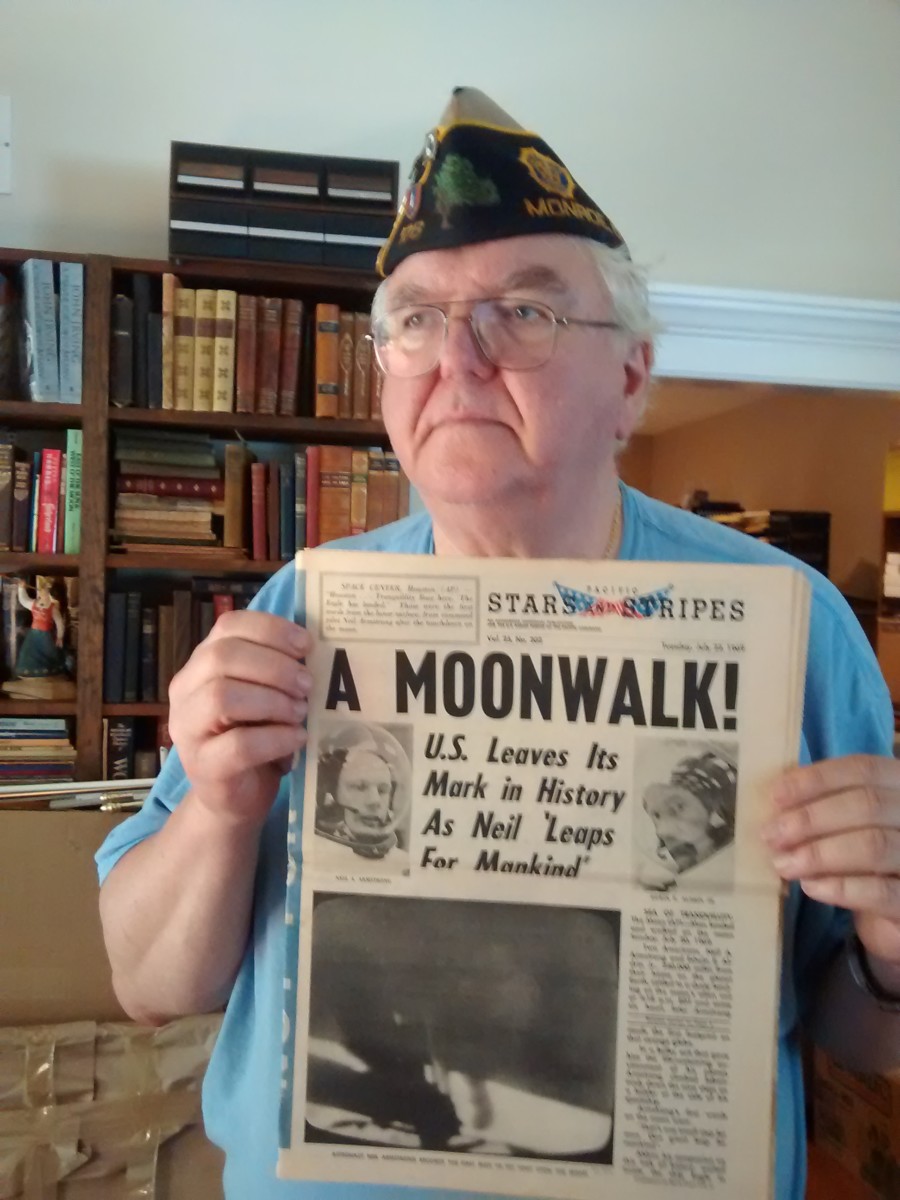 Jan Larsen, a retired Monroe teacher, holds up the issue of the Pacific Stars and Stripes he saved while serving in Vietnam. Its lead story is the historic U.S. moon landing of 1969. Contributed

Jan Larsen was serving as a generator operator and mechanic in the Army during a tour with the DaNang Signal Company, part the the 37th Signal Battalion,  in Vietnam, when he heard the news of U.S. astronauts landing on the moon in 1969.

On June 20, the 50th anniversary of Apollo 11’s successful mission, Larsen took out the issue of the Pacific Stars and Stripes newspaper he saved to chronicle the event. “A MOONWALK! U.S. leaves its mark on history as Neal ‘leaps for mankind,'” the headline read.

“It was pretty exciting for all of us,” said Larsen, 74, who many know from his days as a teacher in the Monroe school system for 35 years.

As a science teacher at Fawn Hollow, Larsen enthusiastically taught his students through hands on experiments.

“I was kind of known as the Rocket Man,” he said in a telephone interview Monday. “We did a lot rockets.”

Larsen said the school bought Estes Rockets. His classes would use glue to assemble the rockets before the launch. “It was a lot of fun,” he said. “I did that for years and years.”

Larsen taught at Fawn Hollow for 26 years and Chalk Hill for another nine, where he taught computer science and was the IT person.

In addition to teaching Microsoft Office — Word, Powerpoint and Excel, internet and digital camera skills at Chalk Hill, Larsen taught his students how to make library I.D. cards with photos and a bar code.

“Most people don’t realize you have to format the picture to make it stay where you want it,” he said.

Larsen served as deputy registrar for the Democrats in Monroe for close to 10 years and is still active with American Legion Sippin-Winspur Post 176. Larsen, a member of 12 years, is senior vice commander.

He and his wife, Barbara, now live in Oronoque Village in Stratford. Larsen has two daughters from his first wife and two stepsons from Barbara. The couple has a total of four grandchildren.

“My youngest grandson from my daughter, Kirsten, is on ‘The Voice,’ Sawyer Fredericks,” Larsen said. “He won Season 8 of ‘The Voice.’ He was the youngest ever to win. He started at 15 and was 16 when he won.”

Larsen said Fredericks has several albums and played in a summer concert at Wolfe Park in Monroe two years ago, as well as at StageOne in Fairfield on more than one occasion.

Larsen remembers the lead up to astronauts Neil Armstrong and Buzz Aldrin taking the first steps on the moon, as Command Module Pilot Michael Collins remained in lunar orbit.

The Soviet Union was leading the U.S. in space travel, launching Sputnik 1, the first artificial Earth satellite, on Oct. 5, 1957. Then putting the first living creature into orbit when Laika, a mixed-breed dog, went on the Sputnik 2 mission on Nov. 3, 1957.

“The Russians were literally way ahead of us,” Larsen said. “Their electronics weren’t as good as ours. They were very rudimentary. Guys were still using slide rules in those days.”

“We knew all about that,” Larsen said of the familiarity with the space race by young people in the armed forces. “I knew it when I left. Since [President John] Kennedy made the speech in the early ’60s before he was assassinated. He said, ‘we’re going to land on the moon in this decade,’ and we just made it.”

Larsen arrived in Vietnam in 1969, after the Tet Offensive, a series of surprise attacks by the Vietcong rebels and North Vietnamese forces, on scores of cities, towns, and hamlets throughout South Vietnam.

“They overran the city of Hue,” he said of a major city in South Vietnam. “A lot of our guys went up there to try to get it back.”

Larsen’s rank was SP-5 or specialist 5, due to his skills as a generator operator and mechanic. “I was more than just an operator, I could make repairs as well. I could tear down a diesel engine and put it back together — supposedly,” he said with a laugh.

“Most of the guys in the signal company had top secret or crypto clearances,” Larsen said. “I had a secret clearance, though to most of them I only made electricity and drove a truck or a jeep.”

Larsen said those who knew military secrets could not leave the compound for fear they could be captured by the enemy. His base had heavy security with barbed wire fencing and guard towers, but Larsen said a tower with a microwave receiver at the top required a flashing red light for helicopter pilots to see at night, making the base a constant target.

“We had incoming almost every night,” Larsen said. “We never had a direct hit, but one time they hit a propane depot a quarter mile away. That’s two blocks. All the lights fell off the ceiling.”

Larsen can still listen to the attack, because a soldier making a voice recording forgot to turn off his tape recorder. Mortar rounds can be heard hitting nearby, before the rocket explodes into its target.

Sirens were blaring during the midnight attack and a man can be heard saying, “get down!”

Larsen’s tour in Vietnam was 11 months and 11 days.

“It made me very patriotic,” he said. “When I was teaching at Fawn Hollow, I would have a couple of kids help me put up the flag in the morning. In the afternoon we would fold it into a triangle. I taught them how to do that. Every class, I taught a few kids respect for the flag, respect for the country and to treat people the way you would like to be treated yourself. Simple stuff.”