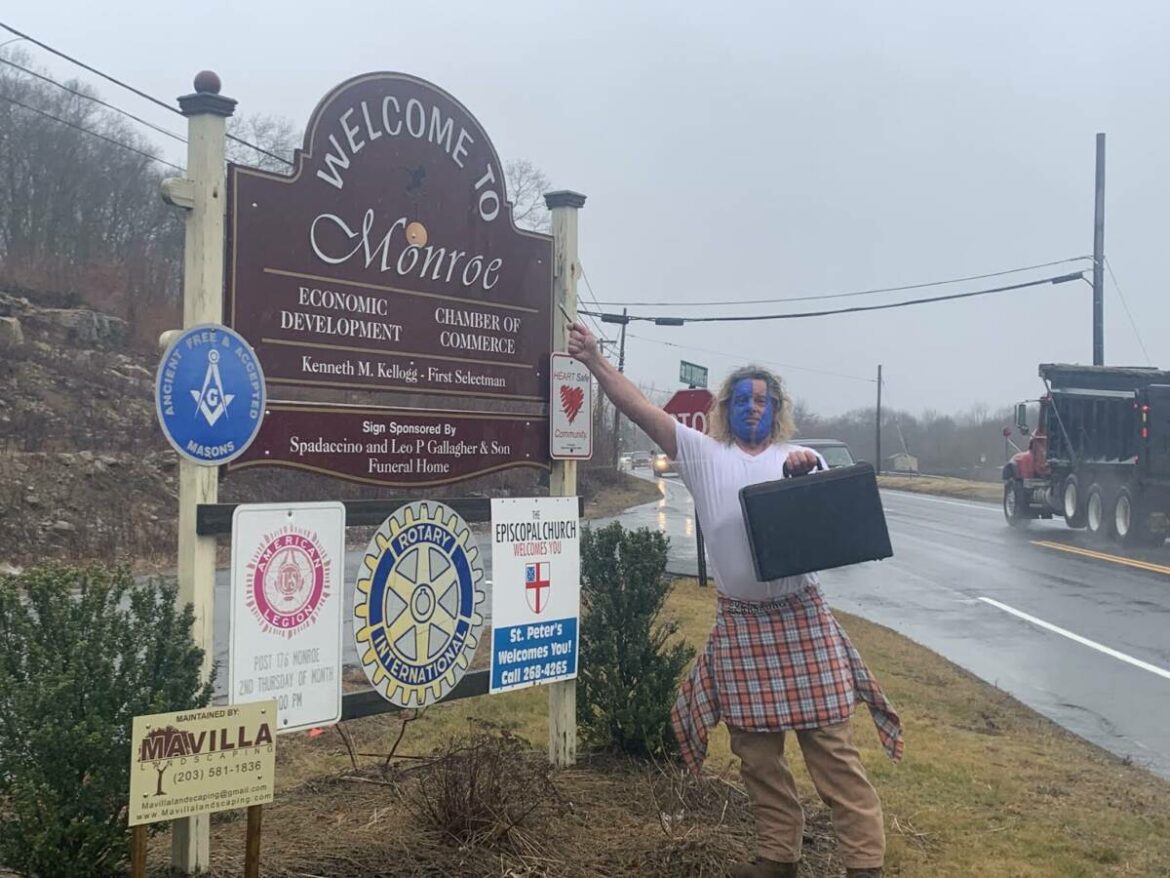 Jason DuBac dresses up as Sir William Wallace from the movie "Braveheart" while standing in front of the Welcome to Monroe sign on Route 111 Monday. He said his brief case is a shield and he's holding a pen, because it's mightier than the sword.

MONROE, CT — Jason DuBac stood in front of the Welcome to Monroe sign on Route 111 Monday, with blue war paint on his face and his plaid shirt tied around his waist to look like Sir William Wallace in the historical movie “Braveheart”, about the late 13th-century Scottish warrior who led the Scots in the First War of Scottish Independence against King Edward I of England.

“I stand before you in defiance of Monroe First Selectman Ken Kellogg’s road closure for a private developer’s benefit,” he said over the sound of traffic in a video he made.

DuBac is fighting to overturn a Town Council decision to abandon a portion of Spring Hill Road, allowing a developer to expand a triangular lot at 255 Monroe Turnpike, on the corner of the dead end street, and build a restaurant or some other type of commercial business. 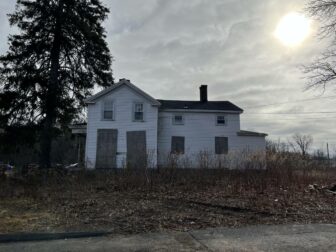 This house at 255 Monroe Turnpike will be razed to make way for a commercial development.

That property currently has a boarded up white house on it.

DuBac is also trying to stop the foreclosure of his late parents’ house at 373 Spring Hill Road, which would lose frontage on Spring Hill Road because of the town’s decision to close it. He contends it will lose some of its property value as a result of the decision.

DuBac, who grew up at 373 Spring Hill Road, now lives in Searsburg, Vermont.

He is upset because he was not notified about the town’s process to abandon the section of Spring Hill Road. But First Selectman Ken Kellogg has said DuBac is not listed as the owner of 373 Spring Hill Road, so he did not have to be notified.

This is backed up by Town Attorney Vincent Marino’s legal opinion.

Though DuBac’s late father John DuBac’s will names him and his sister, Suellen DuBac, as heirs in the event his wife died before him, she outlived him. DuBac’s mother, Elsie DuBac, died in 2020 and her estate is still not settled.

Because of this, neither Jason nor Suellen DuBac are listed on the grand list as owners of the property.

However, Suellen DuBac wrote a letter to the town expressing support of discontinuing the portion of the roadway and listed her address as 373 Spring Hill Road. 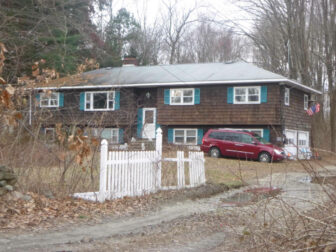 Jason DuBac says he is a legal heir to his late parents’ house at 373 Spring Hill Road.

Jason DuBac spoke at last Thursday’s Planning and Zoning Commission meeting to express his belief that proper notifications were not sent to all affected property owners, and contended that commissioners were misinformed before their vote to approve a municipal referral to discontinue the road.

DuBac said he watched the YouTube video of the Monroe Planning and Zoning Commission’s July 7, 2022 meeting, when Town Planner Rick Schultz told commissioners the dead end portion of Spring Hill Road was never connected to Route 111 and that this commission never saw a need to connect it in the future.

DuBac said he believes his family’s portion of the street was connected to Route 111 as a through road when, around 1993, the town disconnected it and made it a dead end street, then reconnected Spring Hill Road to Route 111 at a different area, adding a traffic light.

“I am fighting for fairness and transparency,” DuBac said. “This process was started with a misinformed board.”

He asked the commission to review and fact check the history of the street, to rescind its municipal referral and start the informative process again.

On Monday night, DuBac reiterated those comments during the public comment portion of the Town Council’s meeting.

“Today’s news is my probate attorney today in court received an extension on the foreclosure sale,” he said. “It is now reset to May 6, 2023 and we are discussing a third party fiduciary. This was done so I can hopefully raise and arrange funds to pay off the past bank debt and settle the estate with my estranged sister Suellen DuBac.”

A brown raised ranch with three bedrooms stands on the 1.4-acre-property. As of Nov. 9, 2021, $276,628 was owed on the mortgage, plus accruing interest, fees and legal costs, according to a lawsuit brought by American Advisors Group to foreclose on the property.

“I have a right to appeal this road closure within 120 days of being posted,” DuBac told the council. “Oh good, I get to hire a land use attorney now.” The town abandoned this section of Spring Hill Road, so owners of the properties that border it now own from the edge of their front yards to the middle of the street.

“The Town Council can rescind its vote due to improprieties,” he said. “I still believe all neighbors were not properly notified. Town Council, please rescind your decision and, at minimum, restart the notification process to make it fair and transparent.”

After DuBac spoke, Town Council Chairman Jonathan Formichella asked him if he wanted to leave any documentation with them.

“I don’t care. I can’t get on an agenda. I can’t get a fair shake. I can’t get notified,” DuBac replied. “I’m doing my due diligence. I tried. What can I do? But the decisions you make greatly impact somebody’s future and I think it was wrong. And I hope to have the money to hire a land use attorney to appeal it.”

Councilwoman Dee Dee Martin asked Kellogg if the town has any knowledge of Jason DuBac being a property owner.

Kellogg said he is not listed on the last grand list, adding he is referring all questions on the matter to the town’s attorney.