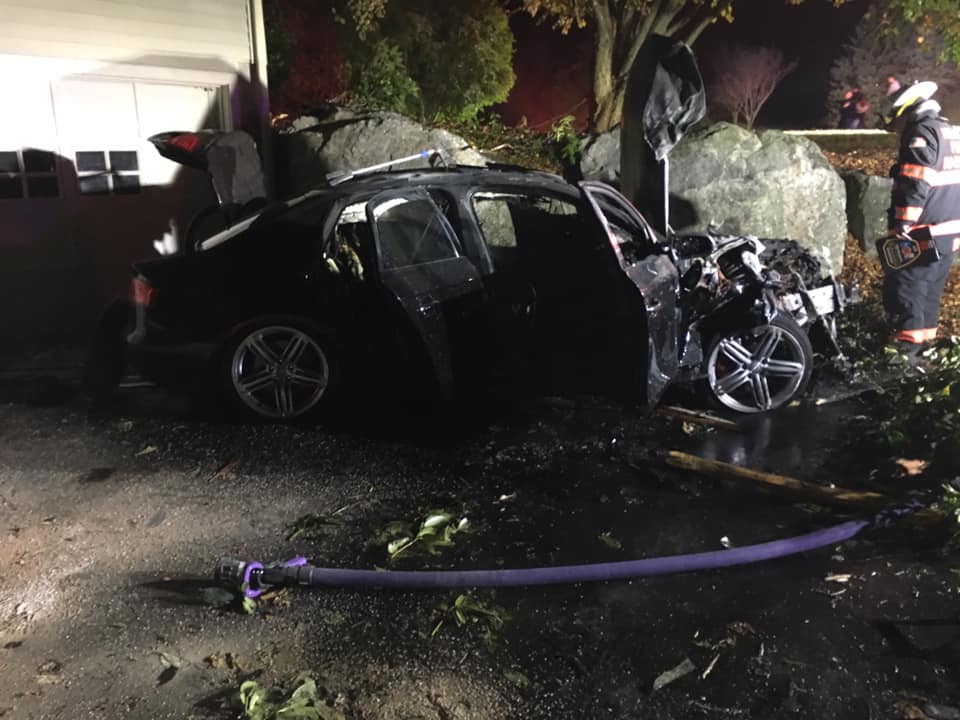 This photo of a the damaged Audi that struck a house and caught fire on Blanket Meadow Road Saturday night, Oct. 5, was shared on the Stepney Fire Department's Facebook page.

Editor’s Note: This article has been revised to clarify that the minor driving during the crash was not charged with DUI.

Though the young driver involved in a fiery crash with three passengers in October was not charged with DUI, it led to a police investigation because the minors were leaving a party. The investigation resulted in the arrest of a Blanket Meadow couple for allegedly hosting the party where minors drank alcohol at their home.

Grace, 53 and Edward Gruber, 55, of 95 Blanket Meadow Road turned themselves in on warrants Wednesday charging them with permitting a minor to possess alcohol.

On Oct. 5, 2019 at approximately 10:35 p.m., police received a report of a motor vehicle crash into a residence at 59 Blanket Meadow Road. An Audi driven by a teenager hit the house, then dropped off a stonewall into the driveway, where it burst into flames, according to police.

The four juveniles inside were able to get out of the burning car with minor  injuries. Officers learned the juveniles had just left a house party at 95 Blanket Meadow Road, according to the report.

Based upon the severity of this crash, the juvenile occupants and the recent departure from a house party, Police Lt. Stephen Corrone said an investigation was opened to determine if underage drinking was taking place at the party.

“The results of this investigation concluded that Grace and Edward Gruber were reckless and negligent hosts, permitting minors in their care to illegally possess and consume alcohol on their property,” police said in a press release.

Police applied for arrest warrants, which were granted by the Superior Court.

The Grubers were both released on a promise to appear at Superior Court, 172 Golden Hill Street in Bridgeport, on Dec. 19.

Police said adults permitting minors in their care to illegally possess and consume alcohol is a criminal offense, adding failure to adequately supervise and make reasonable efforts to deter or halt consumption of alcohol by underage youth guests at your residence may result in your arrest.