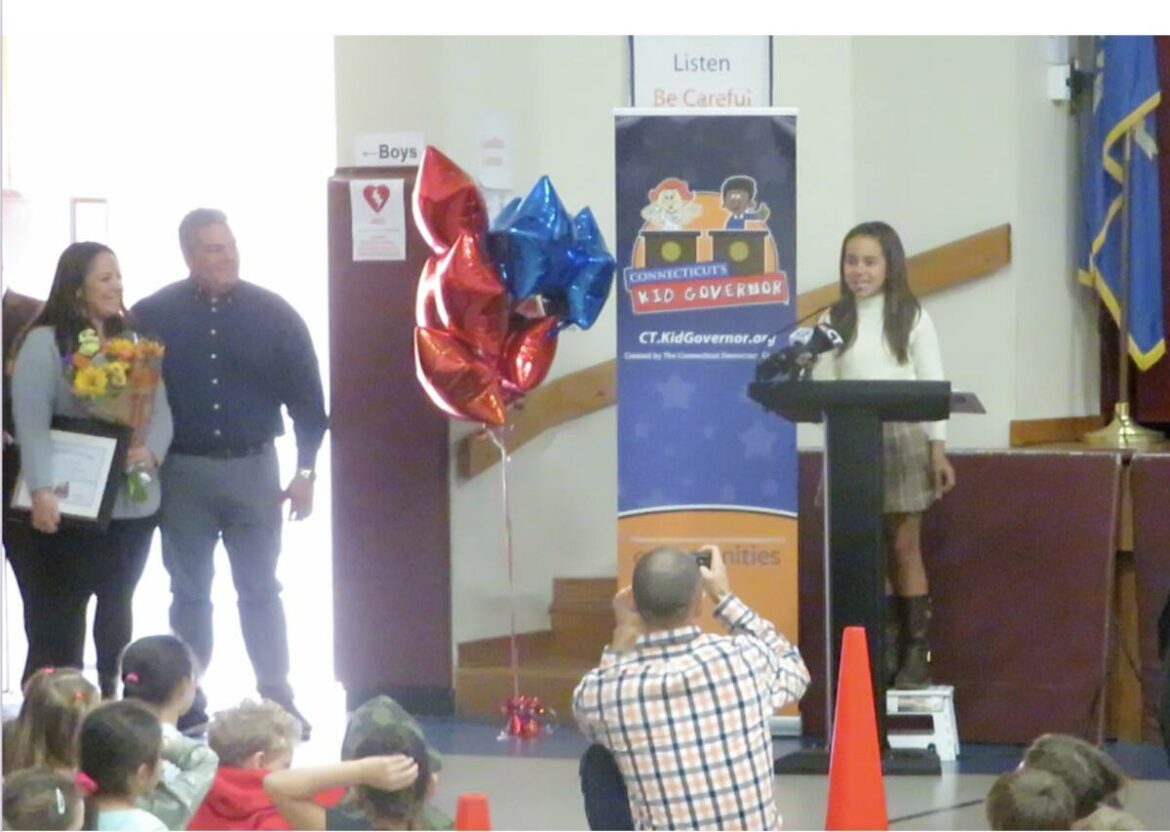 MONROE, CT — Elisavet “Ellie” Mendez, 10, a Monroe Elementary School fifth grader, was endorsed by her classmates as their candidate to run in a statewide race for Kid Governor. The field was narrowed from 41 fifth graders across Connecticut to seven finalists, including Ellie.

Early Tuesday morning, neither Ellie nor her classmates knew she had won, until being surprised with an announcement during a morning assembly inside their school gymnasium.

TV news crews lined up along a wall on the far side of the room, when all of Monroe Elementary’s students arrived and sat on the floor for the major announcement.

Ellie’s parents, Stacey and Angelo Mendez, and her little brother, Angelo, were also among the honored guests.

Nichole Pitruzzello, Connecticut Kid Governor state coordinator for the Connecticut Democracy Center, the nonprofit that runs the annual election, said each candidate made a video of their platform with an explanation of how they plan to make it work.

The seven finalists created videos of their platforms, which were posted online. Then over 9,400 fifth graders in the state voted for their favorite candidate. 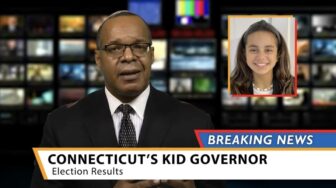 Pitruzzello introduced herself while speaking at the podium, and told the children Wendell Edwards, a news anchor for NBC Connecticut, had breaking news from Hartford.

A breaking news graphic appeared on a big screen in front of the stage, before Edwards appeared, seated behind his news desk.

“Hello everyone, I’m Wendell Edwards with breaking news from Hartford,” he said. “The votes from across Connecticut are in, and we have a winner in the state of Connecticut’s race for Kid Governor.”

Photos of the seven candidates appeared on the screen as Edwards read the names and platforms of each. Among the many topics were literacy and cyberbullying. Ellie’s platform is about anxiety and depression.

When Ellie’s picture appeared, there was scattered applause from her classmates inside the Monroe Elementary School gymnasium.

Edwards told viewers Secretary of the State Mark F. Kohler would announce the results from the State Capitol.

The scene changed to Kohler, seated behind his desk. “I am so excited to announce the results of the state race for Connecticut’s Kid Governor,” he said.

A buzzing could be heard inside the gym as Kohler opened a white envelope. When he announced Ellie Mendez of Monroe as the winner, the home crowd erupted into loud cheers. 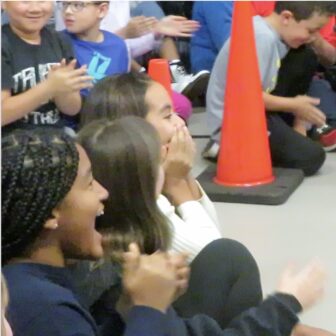 Ellie Mendez covers her mouth while reacting to news of her win as Connecticut’s next Kid Governor during an assembly at Monroe Elementary School Tuesday morning.

Sitting on the gym floor with her friends, Ellie raised two fists in the air, then covered her mouth with both hands, before raising her fists again with a big smile on her face.

Ellie stood up and hugged her social studies teacher, Joelle Palmieri, who escorted her to the front of the room. When she completed her walk, her classmates started to chant, “Ellie! Ellie! Ellie!”

The Connecticut Democracy Center has been holding Kid Governor elections since 2015 and Ellie Mendez is the first winner from the town of Monroe, according to Pitruzzello.

She said each candidate’s platform must be something tangible with an explanation of how it will be implemented.

In her video, Ellie presented a three-point plan with strategies for children to cope with depression and feelings of anxiety; ways to communicate with an adult; and an online resource full of uplifting quotes and other ways to inspire kids.

“This came to me first, because I suffered from anxiety and depression in past years,” Ellie said of choosing her platform.

Pitruzzello said, “the goal of the Kid Governor program and the center is to show kids you can make a difference, no matter how old you are, and to get them interested in civics, build their knowledge of state government and get them excited to vote when they turn 18.”

Ellie received an official Certificate of Election and she will be sworn in during an inauguration ceremony in January before embarking on her one-year-term as the 2023 Kid Governor.

She will work with her cabinet, consisting of the runners up, Aaron Enyong of West Hartford, Jacob Garay of Hartford, Liliana Magazine of Milford, Maxence Celmentine of Middlebury, Scarlet Beaulieu of Andover, and Shaan Patel of Southbury — and Ellie will receive help from the center to make her platform a reality. 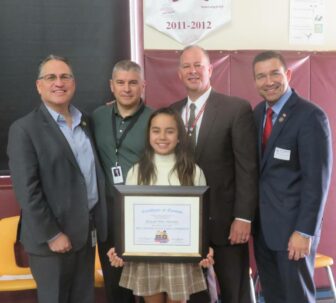 In addition to congratulating Ellie, praise was expressed for her family, Principal Kelly Svendsen and teachers Joelle Palmieri, Michael Rinn and Amanda Cirino for their positive influence on the Kid Governor Elect.

“Congratulations Ellie,” Kobza said. “This is an amazing accomplishment and you should be very proud of yourself. I know those around you are very proud of you, and I want to thank them for the love, support and guidance they have shown you to help you become Connecticut’s Kid Governor.”

“You may not know it now, but you have done more than just being elected Kid Governor,” Kobza said. “You are serving as a role model and inspiring everyone, not only at Monroe Elementary, but throughout the Monroe Public Schools, the town of Monroe and all around the state.”

“You have identified something you are passionate about,” he continued, “something that needs to be addressed — and have acted proactively to address it. I’m really looking forward to all of the good work that you are going to be doing as Connecticut’s Kid Governor this year. Now let’s go show them what a kid can do!”

“We’re all very proud of you,” Ferris said, “and it’s great that you represent the entire town of Monroe so well.”

“I’m so proud of you Ellie for choosing to use the power of your voice and your words to make a difference,” Svendsen said. “We can all learn from you.”

The principal also shared a message for the rest of her students. “If you work hard every day and you are a kind person, you too can be like Ellie and make a difference in this world,” she said.

Ellie stood on a stool behind the podium to deliver her first address to students at her school. She said, “I want to thank the Connecticut Kid Governor program and the Connecticut Democracy Center for giving me this amazing opportunity to share my platform on anxiety and depression.”

She noted how depressed people are often those who smile the most, adding positive change is needed. 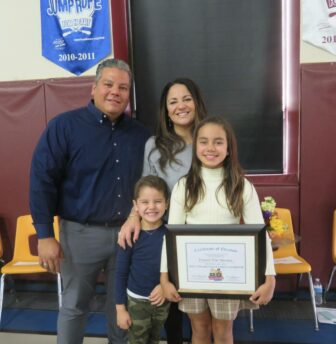 Proud parents, Angelo and Stacey Mendez, pose for a photo with their son, Angelo, and daughter, Ellie, who is the Connecticut Kid Governor Elect.

Ellie thanked the other candidates, her classmates, family, principal, teachers and voters for their support.

“I’m very proud of her courage,” said Stacey Mendez, Ellie’s mother. “She stands up for what she believes in.”

“I’m very proud of her,” said Angelo Mendez, Ellie’s father. “She worked very hard for this and she’s ready to help kids in Connecticut.”

Of Ellie becoming the first Monroe student elected Connecticut’s Kid Governor, First Selectman Ken Kellogg said, “she should be incredibly proud of this accomplishment. She made the entire town of Monroe proud.”

One thought on “Connecticut elects its first Kid Governor from Monroe”